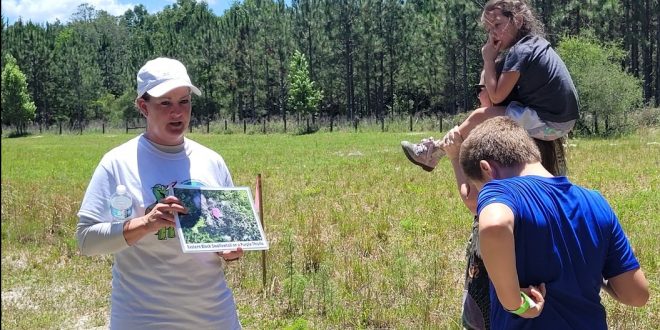 Oakmont, a residential subdivision in Gainesville, organized a celebration for World Turtle Day with activities and tours into the newly developed gopher tortoise reserve.

The 550-acre Oakmont subdivision is a result of ICI Homes, which connects communities around nature and residential life.

In February 2021, Oakmont held a groundbreaking ceremony to create a gopher tortoise reserve; nevertheless, April 10 was the grand opening for the reserve.

The 46-acre reserve has three walking trails ranging from half a mile to 2 miles for residents to walk through.

ICI Homes marketing director, Christina Price, gave tours around the nature preserve to attendees; however, only residents can sightsee after today.

“It is a resident-only amenity that the Environmental Protection Agency actually designates it’s not a public space; however, we were allowed to do for this one day – only just to educate about the gopher tortoises,” Price said.

At the beginning of the reserve, a door marked with a tortoise statue sits to greet trail walkers.

“We added a life-size statue of a gopher tortoise and a poll we made for residents to name the turtle resulted in the name Ollie,” Price said.

According to the Florida Wildlife Center, the gopher tortoise can grow up to 15 inches and identifiable by its stumpy enormous back feet and bright yellow-brown shells.

Throughout the reserve are signage describing flora and fauna found inside the forest-like trails, alongside burrows from the gopher tortoise stand out to walkers.

The University of Florida’s Institute of Food and Agricultural Sciences reported gopher tortoises are essential to the ecosystem by giving refuge to other species through their burrows and passing seeds to different locations.

Oakmont’s sports field held the celebration from 11 a.m. until 3 p.m., gathering a crowd of neighboring Gainesville residents and Oakmont residents.

Price said the World Turtle Day event was to “educate people about gopher tortoises and why they’re endangered and raise money for the three charities that were supporting this year.”

The three charities proceeds went to were: Tyler’s Hope for A Dystonia Cure, Junior Achievement of Alachua County and PACE Center for Girls.

Gainesville Resident, Will Moore, came to Oakmont’s World Turtle Day with his family to see the nature preserve and help educate his younger children about the endangered species.

“I think it’s really important to educate our children while they are young about the environment, especially endangered species like gopher tortoises, Moore said. “We should be connecting our children with caring for nature more and less video-gaming.”

Gainesville resident Rita Bevan, 53, who lives by Oakmont in a neighboring community on SW 24th Avenue, went to the celebration out of curiosity and left mindful of the endangered gopher tortoise.

“I just came out to see what this was all about, and I had no idea gopher tortoises were endangered … I never even heard of them, but I would like to start being environmentally conscious now,” Bevan said.

Gopher tortoises are endangered due to destruction to their habitat, disease and hunting.

“It is a shame to see these turtles and wildlife become endangered because of construction and constant expansion – I think this reserve is a goldmine for the tortoises,” Bevan said.

Kassidy is a reporter for WUFT News who can be reached by calling 352-392-6397 or emailing news@wuft.org.
Previous The Point, May 24, 2021: Gainesville Embarks On Entire Month Of Celebrating Juneteenth
Next Journey To Juneteenth Scavenger Hunt Highlights Historical Black Figures

The largest equestrian complex in the nation opened its doors Tuesday to shelter more than 3,000 horses and other animals from Hurricane Ian – and they did it for free.