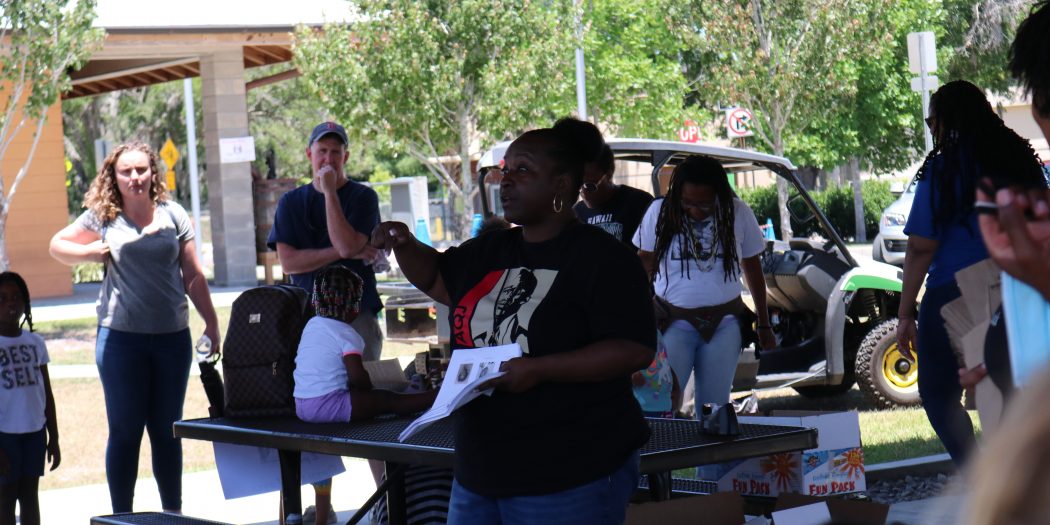 Depot Park was full of young children Saturday looking for combs, chalk and photos of Black leaders from Alachua County. The children’s scavenger hunt for Black history artifacts was one of the first events in Gainesville’s monthlong “Journey to Juneteenth” celebration.

From May 20 to June 19, the city is officially celebrating the emancipation of enslaved African Americans. It’s the first time Gainesville is dedicating a month to the holiday, starting with the day Florida announced emancipation and culminating in the widely recognized day in June.

Yvette Carter, a member of the city’s Employee Diversity and Inclusion Advisory Committee and chief inclusion officer at Gainesville Regional Utilities, hosted the scavenger hunt along with a few volunteers.

“If I’m not mistaken, there were over 100 kids out here looking for facts and artifacts representing Black history,” Carter said. “We just wanted to have an event where kids learned a lot while having fun.”

The event was open to all ages and ethnic backgrounds who wanted to have a better understanding of Black history.

Parents like Keturah Acevedo couldn’t wait to bring their little ones to the scavenger hunt in a familiar park.

“I love the idea of Black entertainment and engaging ways for our children to learn more about our culture and heritage,” Acevedo said. She jumped at the opportunity to bring her 4-year-old daughter Destah’ni to the event once her husband told her about it.

“I went to Buchholz High School, so I grew up in Gainesville,” Acevedo continued. “Most notably, I am member of the Gainesville chapter of the Zeta Phi Beta sorority — helping me stay in touch with where I come from.”

Carter — also a Zeta Phi Beta sister — started the event giving background information on Black history and the rules for the hunt to a crowd of children eager to start scavenging.

Each child was given a checklist of items scattered through the park.

“We found combs, rice and beans, chalk, a paper fan, bookmarks and three pictures of people,” said 9-year-old Deaijah Williams as she stroked her hair nervously. “I totally had fun: Me and best friend couldn’t find the rice and beans at first, but then we saw them. I felt sad though, because I spilled the bag leaving one bean inside.”

Each of the found objects has significance: The comb symbolizes the Afro hairstyle that originated in Africa roughly 6,000 years ago; the rice and beans are two crops that connect African Americans to their roots in Africa, said Carter. The chalk represents the early form of writing tool Africans used from minerals mined from the earth, and the paper fan symbolizes the fashion accessory that most African women wore with their dresses.

The main objective for this scavenger hunt was to inform younger generations about Black figures from Alachua County that are significant to the culture, Carter said. Photos of professor A. Quinn Jones, Cora Robertson and Vivian Filer were hidden in the park.

“The kids were able to find their photos and learn a little bit about them,” Carter said.

Jones is known for being the first principal at Lincoln High School, and it became the second fully accredited high school in Florida because of his efforts.

Vivian Filer, Chairman of the Cotton Club Museum and Culture Center, played an intricate role bringing this month-long “Journey to Juneteenth” to the City Commission.

For the children who participated, the scavenger hunt was a success.

“I think today went well,” Deaijah said. “I was able to learn how the slaves got their freedom — that really empowers me to do more.”

Curtis is a reporter for WUFT News who can be reached by calling 352-392-6397 or emailing news@wuft.org.
Previous Oakmont Subdivision Celebrates World Turtle Day For Gopher Tortoise Reserve
Next The Importance Of Urban Forests In Florida For Suburban Birds

Parents and experts worry about pandemic-related learning loss as national data show millions of students are falling behind.