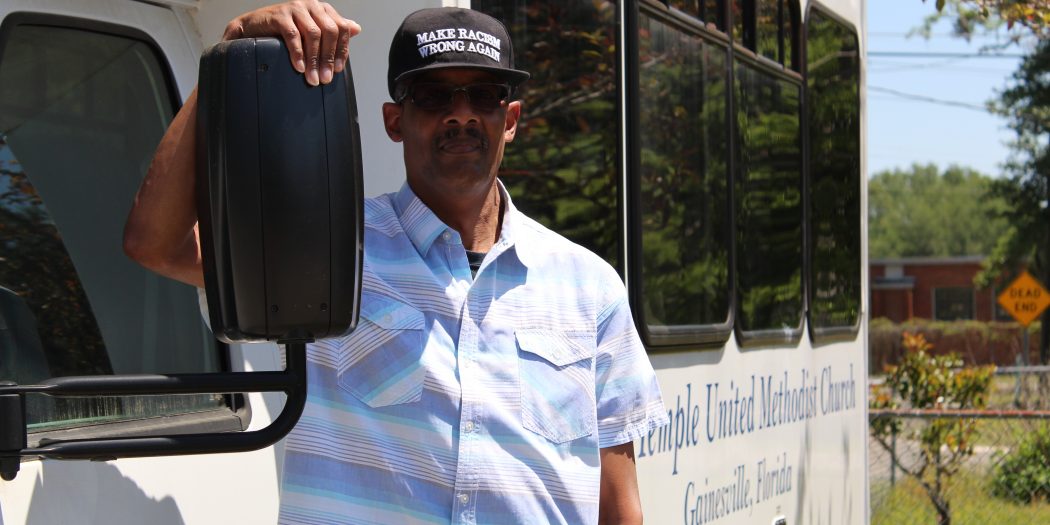 The Rev. Milford Griner stands next to a bus belonging to his home church, Bartley Temple United Methodist Church. “Retiring from ministry after all these years, that’s only one part of my life,” he said. “An important part, it’s the biggest part because I’ve spent over half of my life in ministry.” (Lillian Lawson/WUFT News)

The Rev. Milford Griner considers among his biggest blessings having his name on a bronze plaque at the Gainesville Regional Transit System bus transfer station named after Rosa Parks.

The City Commission renamed the station in honor of the civil rights icon in 2008, and Griner was by then founder and chairman of the local Rosa Parks Quiet Courage Committee.

“Sometimes when I’m driving around Gainesville, and I’ll see a city bus that has Rosa Parks’ name written above it,” he said, “I still get so much pride in seeing that.”

A longtime community activist, Griner, 62, of Northeast Gainesville, is retiring as pastor of Freedom United Methodist Church after 37 years in service to the faith community.

It’s been a career calling that came after he moved with his family from Pennsylvania to Gainesville in 1976, two years after his mother died. His father brought them to the city to live in a house inherited from their grandfather. Griner’s father died in 1977.

“I kind of goofed off for a while, and then I started as a student at Santa Fe,” Griner said.

He joined Bartley Temple United Methodist Church as a member in 1979, and became an assistant minister there in 1984. By 1987, he had his own church to lead.

With Methodist pastors appointed on yearly terms, Griner said he has led 14 churches during his career. Along the way, he became among the best known ministers in Alachua County, said Bishop Christopher Stokes of The New Beginning Christian Worship Center in Micanopy.

Stokes said Griner has consistently lived his faith in his everyday life.

“I see him as a pastor who just did not deliver sermons on Sunday,” added Stokes, who lives in Citra and met Griner around 20 years ago.

After Parks died in 2005, Griner led a local community tribute in which 300 people attended.

The Quiet Courage Committee annually honors people who embody Parks’ spirit and legacy. Griner himself has earned many accolades, including recently the Alachua County NAACP’s Rev. Thomas A. Wright Leadership Award, and Quiet Courage awards in 2012 and 2018.

Vivian Filer, 82, of Southeast Gainesville, fondly recalls the first Quiet Courage celebrations, especially when “we took people back to the era of the civil rights movement singing freedom songs.” Filer met Griner when he was a Santa Fe student and working as a security officer for the college. Many years later he asked her to serve on the Quiet Courage committee.

Griner worked as a security and police officer at Santa Fe for about 20 years. He worked as an officer with the University of Florida Police Department for about a year, and then with the security office at the Oak Hammock retirement community from 2004 to 2017.

These days, he is a senior security officer at City Hall and was recently appointed to a four-year term on the Gainesville Police Advisory Council.

He enjoys collecting diecast model cars – a hobby of almost 30 years – and spending time in his man cave at home, where he also began collecting action figures five years ago.

Griner’s last service as pastor will be June 27, but he will stay active in Methodist church affairs.

Griner said he is retiring to focus on his health, family and other commitments. He has two sons from his first marriage, and two stepdaughters from his wife for 32 years, Mae Griner, who retired as a nurse four years ago after being one for 44.

Donald Page of northeast Gainesville met Griner through a fellowship of their churches more than 20 years ago. Page, 64, a retiree who worked as a truck driver for Alachua County for 33 years, said he admires how much the pastor loves worshipping God.

“His faith to God and his preaching and teaching, it made me a better person,” Page said. “So I thank God for that, and I just wish him all the best in the world and happiness, because he deserves it.”

Griner said his legacy will have been serving the Methodist community well.

“I think in leaving the ministry I’m leaving behind some good works that God allowed me to do, so I’m real proud of that,” he said. “I’ll always be proud of my 37 years.”

Lillian is a reporter for WUFT News who can be reached by calling 352-392-6397 or emailing news@wuft.org.
Previous The Point, May 14, 2021: Vaccinated? Feel Free To Skip The Mask, CDC Says
Next The Point, May 17, 2021: Sorting Through The Confusion Over The CDC’s New Mask Guidance