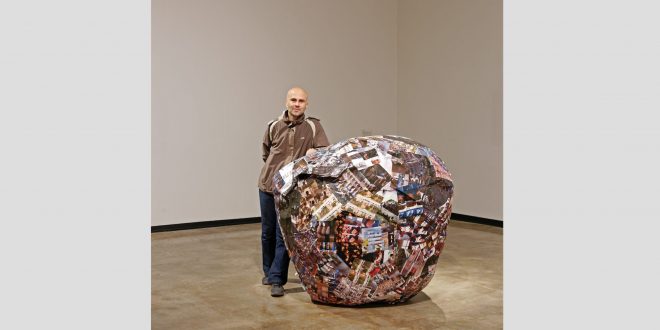 Foad Seyed Mohammadi especially loves portrait photography. As a volunteer at the Saraye Ehsan, a psychiatric hospital in Iran, he spent time teaching patients about photography as well as photographing them. The experience, he said, changed his life. (Photo courtesy of Mohammadi)

On a summer tour of rural Iran, Foad Seyed Mohammadi came upon a man who had no hands. He saw the man in a bustling bazaar in a western village near Sardasht, not far from the Iraqi border. He saw the man’s round stumps amid the swirling colors of fabric for sale and the heady aroma of spices.

Mohammadi approached the man with his camera in hand. And clicked.

And with that, the 38-year-old artist stopped time; captured a moment for eternity. He told the story of a farmer and shepherd named Omar, who lost both his hands in a terrible childhood incident.

When he was 10, Omar had tried to grab a tomato-sized object he saw lodged in the ground. It was a bomb.

It was the mid-1990s and a civil war raged among the Kurds, including factions that were based in Iran. Omar didn’t remember what happened except that he woke up in a hospital bed to the sound of his mother’s wails. The family had found him covered in blood; they had thought he was dead.

Instead, Omar learned to live without his hands.

Mohammadi’s images have etched Omar’s story into the collective mind of all who see it. With one photograph, he transports the viewer to a mountainous village and engulfs them in a story of hope and humanity.

The 4Most Gallery’s new art exhibition, “Nonsense,” a photography story about Omar, his hands and his life will be on display from May 18 to 24 at the gallery, located at 534 SW 4th Avenue.

One series of photographs documents Omar swimming in a pool. The pictures suspend him in time, in between strokes and splashes. The camera catches his smiling daughter; Omar’s arm resting on her shoulder.

Although Mohammadi found Omar by chance, their friendship created a lasting impact on each of their lives.

Mohammadi grew up in Tehran, and after high school, he enrolled at the Tehran University of Art to study textile design, printing and fashion. He moved to Gainesville in 2018 to pursue an MFA in photography; His passion for the camera, driven by a desire to help people with his work.

“I liked art as a kind of international language for connection between all cultures…without any limitation,” Mohammadi said.

Mohammadi especially loves portrait photography. As a volunteer at the Saraye Ehsan, a psychiatric hospital in Iran, he spent time teaching patients about photography as well as photographing them. The experience, he said, changed his life.

“The first thing that I remember, it was the smell of the drugs,” Mohammadi said. “Most of them, they didn’t have any feeling, I couldn’t have any connection between them.”

One photograph Mohammadi took of the asylum, titled “The Death of Marat,” won Best in Show at the Art in Isolation Gainesville Fine Art Association Gallery in March. Mohammadi captured a hand dangling from the side of a floral hospital bed that sparks sorrow and mystery.

Mohammadi took advantage of the COVID lockdown to revisit old hard drives and files filled with past photographs from all the places he once explored. He reviewed his photos of Omar from the summer he spent traveling in rural Iran in 2019 and decided to submit them for exhibit.

Morgan Yacoe, the 32-year-old curator and resident artist at the 4Most Gallery, said she found the humanity Mohammadi invested in his work to be beautiful. She wanted to display this personal story at the gallery.

“I think the first thing that really struck me with Foad’s work, especially this exhibition, is how he created this body of work to help somebody in a very direct way,” Yacoe said. “I thought that was just really powerful and poetic and has a very strong goal.”

“There’s a closeness to life within his pieces, within all of his work,” Yacoe said.

Mohammadi approached Yacoe with the idea to raise money to buy prosthetics for Omar. She connected him with a friend at the Generational Relief in Prosthetics (GRiP) Lab, a student organization at UF that provides customized prosthetics to people.

After a meeting in November, the GRiP Lab agreed to make prosthetics for Omar.

One photograph, in particular, struck a chord with Yacoe. It showed Omar working in the field, swinging a rope between his shoulders and arms to create a pulley against the lush greenery. The purple sky faded behind Omar, and the rough mountain range surrounded him. It left Yacoe’s colleagues speechless.

“When that picture came up, they all kind of gasped,” Yacoe said. “You can really see the struggle; just how challenging and just how needed prosthetics are for him.”

Prosthetics can cost anywhere from $5,000 to $50,000. Utilizing a 3D printing machine helps lower costs and expenses to only a fraction of that. The cost of making a prosthetic with GRiP is between $20 and $30. The GRiP Lab is funded primarily through departments at UF and sustained by donations and sponsorships. Recipients usually receive their prosthetics at no cost.

Melissa Isoba, a 21-year-old team captain at the 3D-Printed Assistive Devices Team with the GRiP Lab, said the lab will be making a nude unlimbited arm prosthetic for Omar. That’s an elbow-powered hand for people who do not have a functioning wrist and are unable to use wrist-powered devices.

Working with a recipient halfway across the world has been challenging. It has been difficult to communicate given that Omar lives in a village that lacks modern infrastructure, Isoba said. The lab is waiting for a courier service to deliver photos of Omar’s arms next to a ruler for prosthetic measurements.

“This would be my first time making it for a recipient,” Isoba said. “I know that he has a family, people that are depending on him. I know it’s going to be such a rewarding feeling.”

While the GRiP Lab focuses on finishing the prosthetics as soon as possible, Mohammadi and Yacoe are focused on getting the exhibit ready for the public.

“I take the artist’s lead, but then I offer suggestions if they’re open to it,” Yacoe said. “It’s always a really fun, engaging process.”

Mohammadi said he loves sharing his work at shows and creates a space where the viewer can engage with the images beyond the frame.

“Art gives me a source of freedom,” Mohammadi said. “I cannot explain it, even in my language.”

Mohammadi completed his MFA and hopes to work in an art gallery or possibly a newspaper so that he can continue making images.

But his big dream is to travel across the United States and document the people and places he sees. Of hitting the open highways and capturing portraits that forever etch a moment and tell a story that night otherwise never be known.

Michelle is a reporter for WUFT News who can be reached by calling 352-392-6397 or emailing news@wuft.org.
Previous Oldest Indian Rhinoceros In Captivity Celebrates 40th Birthday At Carson Springs
Next Explainer: What’s Going On With Tim Tebow And The Jaguars?