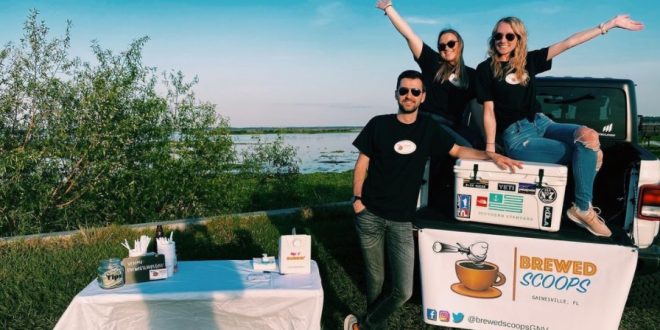 (From left to right) Co-creators Dominik Vinke, Tori Whidden, and Kayla Bain set up the Brewed Scoops pop-up at Paynes Prairie so customers can enjoy a view of the sunset while enjoying a sweet treat. (Photo courtesy of Ali Mohammad)

May 6, 2021 Business and development, Coronavirus

The clever burger business has sought to capitalize on the Nickelodeon nostalgia by attempting to equate its burgers with the cartoon’s adoringly famous “Krabby Patties.” But an animated sea sponge doesn’t make DJ’s burgers. Instead, they are crafted by chef Jose Nieves, a former New Yorker and culinary school graduate who now smashes 1.5 oz patties in cast iron pans until their juices are released and an even sear achieved. They’re usually served alongside hand-peeled, seasoned French fries made by triple-cooking them with a “special methodology [they’re] still perfecting,” said Miguel Cardona, DJ’s co-founder.

DJ’s humble beginnings can be traced to November in a small grill station under a canopy tent in a parking lot on Northwest 10th Street. That’s where they remain and plan to stay, but you can’t get your hands on a DJ’s burger any day of the week. Only their social media platforms reveal the burger joint’s next outing.

DJ’s Cast Iron Burgers are part of a league of food pop-ups that have set up camp in Gainesville over the past year, a trend propagated in part by the pandemic’s impact on small businesses.

In January, the National Restaurant Association (NRA) reported a sales figure $240 billion lower than its pre-pandemic forecast for the restaurant industry in 2020. The NRA also found over 110,000 restaurants had closed their doors as of December 2020, and around 8 million employees were laid off or furloughed.

The Gainesville community suffered its own loss of legacy restaurants in 2020, like Leonardo’s Pizza By The Slice, Daybreak Pleasant Street, and The Swamp Restaurant, all of which had been in operation for over 20 years. The pandemic threatened not only brick-and-mortar establishments but other food businesses as well, foreshadowing the surge of pop-ups.

For Cardona and Nieves, DJ’s emerged as a result of low revenue from their primary business, brio!, a bottled cold brew that’s distributed state-wide through Whole Foods.

“It’s kind of funny, we ‘popped up’ out of necessity and lack of capital. … Cash flow was tight,” Cardona said. “We have always seen DJ’s as a strong concept for a brick and mortar. Introducing (it) as a pop-up was a great way for us to prove the concept without a huge capital investment.”

Rodney Germain of Germain’s Chicken Sandwiches found a similar reprieve from pandemic problems through the pop-up route. His pop-up has officially operated out of Wyatt’s Coffee in downtown Gainesville since February.

Only on Fridays can patrons snag a signature sandwich consisting of golden, perfectly crispy chicken resting between brioche buns, covered with bacon jam, secret sauce, hot oil, or tomato jam (or, all of the above). It’s best enjoyed with a fried mac & cheese ball on the side.

Germain, a veteran of the food industry since moving to the U.S. from Haiti, was furloughed during the pandemic last year, an experience he calls “a blessing in disguise.” Despite being forced to rethink his brick-and-mortar vision, he moved out of his comfort zone to “create culinary fire” through Germain’s Chicken Sandwiches.

Germain’s admiration of the pop-up concept stemmed from its dependence on a strong community.

“It brings me back to the value of food and community in Haiti: It’s simple yet powerful,” Germain said. “These events are like Gainesville’s little shared nuggets. It gives us all as a community something to look forward to, whether weekly or monthly; it helps food lovers thrive in the rapidly changing food industry.”

Gainesville’s large student population and already strong local community gave pop-ups like DJ’s and Germain’s the perfect launching ground, and from what these chefs and other experts forecast, the pop-up trend seems like it’s here to stay.

Dean Cacciatore echoed the sentiment that pop-ups will become a Gainesville staple.

“It has been shown that pop-up dining experiences are the fastest growing trend of all events,” said Cacciatore, a 40-year veteran of the hospitality industry who owns the catering/pop-up business, Cacciatore Pizza & Kitchen. “Coupled with the lower startup costs, lower overhead and lower labor needed, it only makes sense that this trend will continue.”

The pop-up trend has even edged its way into graduate courses at UF’s Warrington College of Business or, perhaps, has gained more traction because of those graduate courses.

Tori Whidden, Ali Mohamed, Dominik Vinke and Kayla Bain embraced the pop-up method when the group was tasked with creating a feasible business in just 6 weeks for the class. Opting for a pop-up was the perfect route to pursue for the busy masters’ students and their simple yet solid idea.

“At first, we were just attempting to see what would work best,” Whidden said. “We didn’t have a whole lot of money to get into a full established building.”

Whidden and her team were also pushed to go the pop-up route because of the Gainesville community’s affinity for local food.

“Pop-up food restaurants are trendy…Students like the idea of finding somewhere new and different to go,” said Whidden, a former WUFT reporter. “It seems that students living in Gainesville would rather try local restaurants and pop-up shops rather than a chain they could get in their hometown.”

Social media is a critical component of Brewed Scoops’ popularity as well, with Whidden saying it “[keeps] customers on their toes.” Everyone from die-hard customers to newcomers wanting to try the buzzed-about food must keep tabs on the digital forums to know when and where these pop-ups will pop up.

Cacciatore also recognizes this as a necessary ingredient to a pop-up’s prosperity.

Aside from an ingenious and necessary marketing method, social media also assists in making these food pop-ups more accessible for both creator and consumer, according to Jennifer Dunfee of Brake Bread, a microbakery that sells fresh pastries through pop-up and delivery systems.

“Many of our customers would never have come across us without randomly seeing us at a pop-up event or [seeing] one of our advertisements on social media,” Dunfee said.

Dunfee founded Brake Bread earlier this year because it was “the only avenue open” to her. After years in the food industry, Dunfee set out to create her own bakery that would celebrate the behind-the-scenes workers and not just “serve those at the top.”

The pop-up proved to be the right route for her to continue her craft without all of the “unnecessary, often harmful aspects of the food industry.”

“I hate the idea that you have to have [upwards of] $50,000 just to provide your products to people or that you’re only successful if you have a storefront…People run themselves ragged trying to get and maintain [one],” Dunfee said. “[They’re] just not an option for everyone, so pop-ups are a great way to get out there into the community without sacrificing health and financial stability.”

Dunfee also seriously considered COVID-19 safety protocols when developing her business plan. Deciding to sell her baked goods at outdoor pop-ups, she thought, would be the safest, most appropriate option for both her and her customers.

Many pop-up devotees like Drew Snow, a University of Florida pre-health student, appreciate the choice to take their eating explorations outside.

“Exploring new food places and eating out are some of my favorite things to do,” Snow said. “When the pandemic hit, I thought I wasn’t going to be able to do that for a long while; pop-ups are great because I can still enjoy local food while staying safe and socially distanced.”

Snow transferred to UF mid-pandemic, so eating inside at restaurants was out of the question for some time. His first pop-up experience was at Germain’s, where he ordered a chicken sandwich and chips.

“It was one of the first times in a while I was able to get together with friends and enjoy good food,” Snow said. “And, the chicken sandwich was amazing.”

The pandemic robbed many of their jobs, beloved establishments and routines; Pop-ups provided places of solace and outlets of normalcy for community members and business owners alike during these isolated times.

With more chefs opting for independent avenues to pursue their craft and local gourmands appreciating this new way to enjoy food in their communities, it seems that pop-ups are a Gainesville trend that’s sticking around for the long haul, pandemic or not.

Ale is a reporter for WUFT News who can be reached by calling 352-392-6397 or emailing news@wuft.org.
Previous Wedding Planners ‘Learn To Pivot’ After A Year Of Rescheduled Ceremonies
Next Eerie Parallels: Man Suspected Of Killing Young Sons And Himself Mirrors Case Of Brother Who Killed Ex-Wife’s Boyfriend Then Attempted Suicide

Florida Changes From Daily COVID Data Tracking Updates To Weekly. UF Says It Doesn’t Plan To Do The Same

Now that over 10 million Florida residents have received a COVID-19 vaccine, the state Department of Health has changed its daily coronavirus data updates to weekly reports.