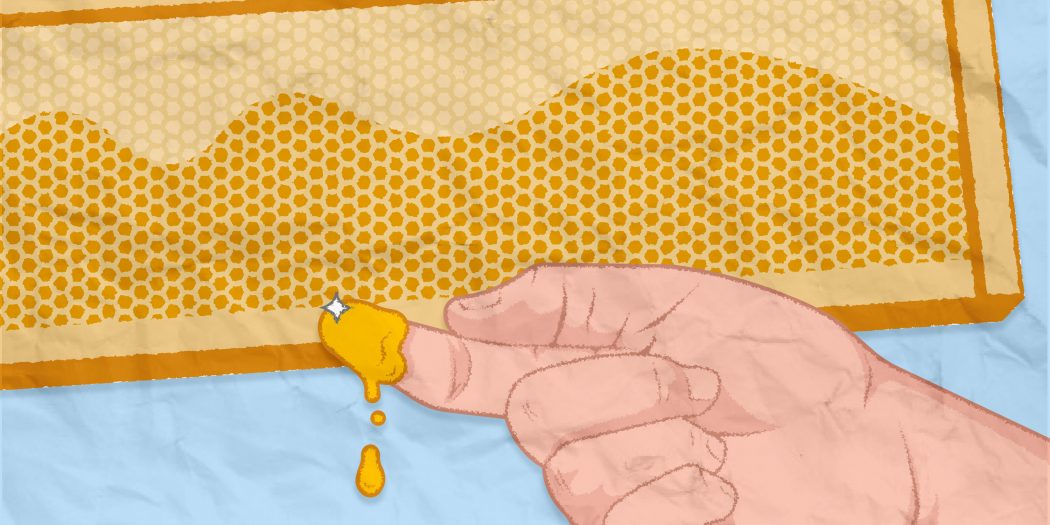 One of the most memorable moments for Alachua County beekeeper Danny Johnson was the first time he ate the honey his bees produced. (Illustration by Jade Le/ WUFT News)

Alachua County beekeeper Danny Johnson sells five to six orders of honey a week out of his home. The possibility of profits wasn’t the only thing that spurred his choice to become a hobby beekeeper, Johnson said ― it’s also the joy of simply watching the bees work.

Johnson likes to unfold and sit on a metal chair in his yard or stand right next to the bees and watch them work when he can. Sometimes his wife accompanies him by sitting on a chair on their backyard patio, but she keeps her distance from the bees due to allergies.

One of the most memorable moments for him, he said, was the first time he ate and processed the honey his bees produced. He said he picked up a frame from a beehive he was inspecting, poked a finger in the honey, lifted his veil that was attached to his ventilated nylon jacket and tasted the sweet results.

He said his experiences with beekeeping, however, are not always consistent.

“The fun thing about beekeeping is it’s not an exact science,” he said. “There’s not one particular way to do it, and that’s what makes it fun. It also makes it difficult sometimes because the bees don’t always do the same thing.”

Tyler Carney uses a bee smoker to calm the bees as he lifts a frame from one of his hives on March 28, 2021. (Antonia LaRocca/WUFT News)

Sometimes, issues arise that damage his success and profits.

“It’s easy to get down and think about quitting when you lose a lot of hives,” Johnson said, referring to when all the bees in one of his hives died. “It’s normal every year to lose about 30% of your hives. That’s just normal beekeeping. But to lose a hive is kind of depressing.”

Tyler Carney, an Alachua County beekeeper and the vice president of the Gainesville Area Bee Club, said he was introduced to beekeeping by some friends in the summer of 2016, and by a class he took in his last semester as an undergraduate. In April 2018, he obtained his first hive and bee colony.

Along with processing honey, Carney said beekeepers can gain economic profits through selling pollen, wax and bees. But, like Johnson, he also does it for the joy of it.

“There’s an enjoyment out of it,” he said. “Not only just being able to try and care for these hives and then seeing them grow, but, you know, giving honey away to people ­– that’s really exciting.”

Carney said the general public, though perhaps well-intentioned, is misinformed about honeybees.

“That save the bees message I feel like is problematic,” he said.

“There’s a lot of focus on honeybees, not enough focus on the native pollinators we have in the United States,” he said.

He said beekeepers should be careful when managing and caring for their honeybees partly due to the threat honeybees pose to native species.

Beekeeping management can differ from beekeeper to beekeeper with varying results, he said.

“You can do everything right, and it will still go south. Stuff can just fail,” Carney said. “The joke is that the bees read different books than we do.”

Beekeepers should manage the ever-present threat of pests to hives, especially the varroa mite, he said.

“Those are nasty, nasty mites,” he said.

He said varroa mites for bees are like ticks for humans. He considers them the number one killer of honeybees and the number one priority that needs addressing.

To treat and prevent honeybee deaths and the threat of honeybees spreading mites to native bees, he turns to mechanical and preventative measures. He said he purchased screened bottom boards for the hives as a solution. Along with ventilating hives and providing other advantages, if a mite falls off a bee and drops through the screen, then it is out of the hive and no longer a threat.

Mitigating honeybee queen stressors is also crucial to the survival of a hive.

Last year, Carney said he had to brave falling sheets of rain during a thunderstorm as he drove 40 miles an hour on Interstate 75 to pick up a honeybee queen for his hive that needed a queen.

“When people need a queen, they’re desperate for a queen,” he said.

When he was back at the hive and there was a break in the rain, he said he dashed to the beehive and attached the plastic cage the queen was in between two frames with an unfolded paper clip to provide support, and then he hoped for the best – for the bees to accept their new queen.

Like Carney and Johnson, Gabriela Orta is invested in protecting bees, but she’s uniquely positioned to do so.

Orta is a University of Florida alumna and property manager for Villa Ravine Apartments, an apartment complex in Gainesville that deals with the presence of bees.

To remove the bees from the apartment complex, Orta works with a local beekeeper.

“I really enjoy saving them,” she said. “I mean, obviously, they’re very important to the world, so I really wanted to not have to kill them because that was going to make me feel horrible.”

She said she began working with a company that works on bee removals in Alachua County two years ago. But due to the service costs and other factors, she said the apartment complex does not work with the company anymore.

Instead, Orta said the complex started working with local beekeepers. The beekeeper it works with now has placed blue bee houses along the property’s edge to attract the bees away from the property.

“Since then, I mean, knock on wood, I really hope it keeps going so well because I haven’t gotten them inside the apartments at all anymore,” Orta said. “They’re just going into those houses, and it’s a win-win situation for everybody.

“I feel happy to be able to help. And I think more people should try to do their part.”

Antonia is a reporter for WUFT News who can be reached by calling 352- 392-6397 or emailing news@wuft.org.
Previous Gainesville Food Truck Park Could Serve Alcohol By Fall
Next As Nationwide Ammunition Shortage Continues, North Florida Gun Owners Feel the Effects