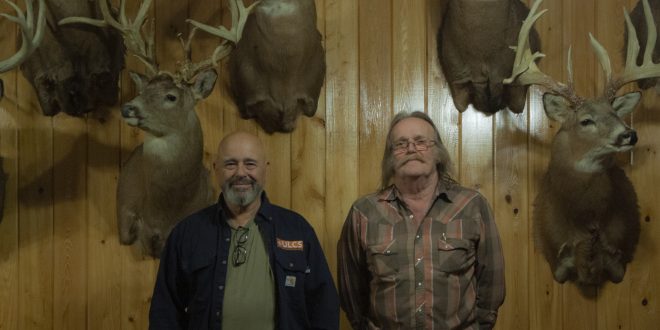 James "Smitty" Smith and George Macris stand in front of a wall of mounted deer heads inside the Green Cedar Farms lodge. Hunters visiting the preserve can stay overnight in the lodge during their visit. (Melissa Hernandez/WUFT News)

By Danielle Ivanov and Brittney Miller

Franklin Phillips started taking his five children hunting with him when they were just 6 months old. They continued the legacy into their teenage and adult years. Hog, deer, quail and even alligators have fallen during their frequent hunting trips.

“A lot of people go to Disney,” Phillips said. “We go outdoors.”

He is one of the more than 163,000 Florida residents who purchased hunting licenses in 2020, the state’s highest number since 2015. He primarily practices free-range hunting on state lands.

But what about hunting on private preserves? It’s an option for Florida hunters but one that is hotly contested.

Both private and public hunting opportunities have their advocates and opponents. Support often deviates over costs, environmental impacts and the very definition of hunting. But for decades, both these avenues have persevered in Florida.

Hunting preserves are bundles of private land that can span up to 10,000 acres. Encircled by towering fences and stocked with animals, these businesses promote a guaranteed hunting experience that could come down to luck in the wild. The preserves allow hunters to snare native animals like white-tailed deer, bison and quail; invasive species like wild hog; and nonnative or exotic game like antelope.

In 2020, the state licensed 124 hunting preserves, according to the Fish and Wildlife Conservation Commission.

Public hunting on Florida’s nearly 6 million acres of wildlife management area is the more traditional, do-it-yourself option – and the cheaper one. Any state resident can apply for a recreational hunting license with the Fish and Wildlife Conservation Commission regardless of criminal history. Disabled resident licenses are free, while the standard license and safety training course costs depend on the applicant’s age, species sought and weapon type.

Although hunting preserves exist as private lands, they are regulated by both the Fish and Wildlife Conservation Commission and the Department of Agriculture and Consumer Services.

When managed well, the preserves can be beneficial to humans, animals and natural land, said Martin Main, a University of Florida wildlife ecology and conservation professor and a lifelong hunter. But what occurs behind their fences can be a mystery to outsiders.

“What I’d like to see is more research done on this topic. I’d like to see what these preserves are doing and how they’re doing it,” Main said. “There’s a lot of questions about hunting preserves, and we don’t have a lot of answers.”

Those questions include:  What’s the price? And are the animals humanely and responsibly cared for?

Of the 24 game farms and preserves Fresh Take Florida contacted, only one for-profit preserve, Green Cedar Farms, responded for an interview.

At this 400-acre property in Live Oak, Florida, hunt leader James “Smitty” Smith promises a kill within two days when hunters visit – or they don’t have to pay a penny.

“A lot of people call this a canned hunt because you’re gonna kill something here,” he said. “It’s a guarantee.”

Smith, 62, said preserve hunting is essentially a condensed experience of public hunting. Instead of spending time perched on a tree stand, hoping a big enough buck passes by, visitors can snag 100 or more pounds of meat and a trophy mount in just hours.

Smith estimated a total of 350 animals roamed the property, including buffalo, deer, elk and antelope. Compared to public hunting, preserve patrons don’t need to have an individual hunting license, as the business pays $500 a year for a blanket license for visitors.

But hunters must bring their own coolers and preferred weapons, he said. Prices range from $3,000 to more than $5,000 depending on the species and number of animals hunted – a cost that can deter large groups, like the Phillips family.

“People say it’s too expensive,” Smith said. “Well, how much did you spend on hunting last year? It adds up.”

Prices only seem expensive because they are one-time fees instead of costs spread over months of public hunting seasons, he said. And time, not complexity, is the real difference.

Based on his 20 years of personal and professional experience on preserves, he said, most arguments against fenced-in hunting come down to misunderstandings or differing opinions. Animals on his property still have room to run and hide from hunters and aren’t desensitized to people despite regular feeding times, leading to an organic chase just like in the wild.

Smith and coworker George Macris also run a game farm on the Green Cedar Farms hunting preserve property. They raise their own deer instead of relying solely on offspring from outside breeders or the various herds roaming their 400 acres.

Macris said disease is easy to manage on the farm with regular vaccines and medical care. His trained eyes can spot a deer in need of help just by the height of its ears. The biggest problem his animals face, he said, is the same on a preserve and in the wild: the threat of hungry coyotes who target young fawns.

Game farms in Florida can be as big as 2,000 acres and require the same 8-foot fencing, space to sleep and stand, clean water, regular food and veterinary care as hunting preserves, according to state regulations. Animals bred there, whether native or exotic, can be sold and transported to other farms or butchers across the state with proper licensing. Some are even auctioned off to individual bidders or zoos at wild animal shows.

While the number of hunting preserves in Florida has remained quite steady throughout the past decade, the number of game farms is slowly declining, according to data from the Fish and Wildlife Commission.

In 2013, officials closed the state’s borders to deer importation in hopes of limiting the spread of the extremely contagious and fatal chronic wasting disease. The neurological ailment is plaguing deer populations across the country, though it has not been recorded in Florida yet. Since the borders closed, Florida has lost 18% of its game farms.

The state’s deer farming industry had been around for decades before Laurie Cook first heard of it. She bought her first deer in 2011; now, she owns BDRL Whitetail Paradise Farm in Okeechobee and is the president of the Southeast Trophy Deer Association.

Cook cares for 50 to 60 whitetail deer on her 20-acre game farm. A former veterinarian, she said she watches her animals “like flies on poop” for any deer parasites: epizootic hemorrhagic disease virus, blue tongue virus and especially the deadly chronic wasting disease.

The threat of disease has driven a wedge between preserve and game farm advocates and their opposers. Wildlife agencies that manage wild deer, for instance, sometimes blame game farms for introducing diseases into wild populations, said Samantha Wisely, a University of Florida wildlife ecology and conservation professor.

In 2012, Wisely estimated, Florida farmers lost $32 million in deer due to epizootic hemorrhagic disease virus. This devastation prompted the creation of the Cervidae Health Research Initiative, an organization that connects about 100 Florida deer farmers with researchers in the fight against disease spread. Wisely has served as its director since its inception in 2014.

She said it also advocates for more sustainable pen management options on farms. Since animals are kept in higher densities on farms than they would be in the wild, it is easier for diseases to spread from animal to animal via bugs. Keeping pens clean and densities down decreases risk of spread, she said.

Aside from disease concerns, some hunters opt for public lands over hunting preserves because of their more organic hunting methods.

There’s no comparison, said Clay Crooks, 37, who has been hunting for as long as he can remember.

In the wild, he said, hunting is a yearlong affair. Before the season even starts, he scouts the land for animal scat and trails. Then, when it’s finally time to hunt, he said he simply sits and waits to catch the right animal – for “hours by hours, sometimes days by days.”

Preserve hunting, with its fences and feeders, renders those traditions unnecessary.

“It’s sort of cheating on the hunting aspect because they’re coming to or from a food source,” Crooks said.

Todd Hallman, former president and current board member of the Florida Sportsmen’s Conservation Association, is another advocate for the public route. He has spent the bulk of his 62 years scavenging woods across the state and has since passed the tradition on to his children and grandchildren.

“There’s a lot more to it than just the hunting part,” Hallman said. “Say you’re sitting in a tree stand, 5 o’clock in the morning. It’s dark; it’s quiet as can be. You see a gorgeous sun rise. It’s just tranquility. There’s a lot of friendship that goes on there.”

Between November and January, the outdoorsman applies for special lottery hunts on state land with restricted access for venison. Each rejected application gives him points, and the more points he has, the higher up on the list and more likely to get picked he is for the next event. This lottery system and state limits for number of deer killed per hunter ensure species populations remain healthy, neither too numerous nor too few for ecological conservation, Hallman said.

Floridians are allowed to kill two deer a day and up to five deer a year in a season, two of which can be antlerless, according to the Fish and Wildlife Commission’s website. Any violations of the hunting laws, like killing endangered species or hunting fowl at night, can result in license suspension or revocation, fines and jail time depending on the seriousness of the crime.

“You just can’t go out and shoot what you want when you want to do it. If you do and you get caught, you’re gonna serve some time,” Hallman said.

Most people, he said, hunt to feed their families, exercise their minds and bodies and just have fun in nature. For hunters like Hallman and Phillips, the lure of the pastime is the direct connection to the outdoors and tradition.

“People enjoy it because it’s peaceful,” Hallman said. “If you caught something every time you went hunting, they’d call it killing. It’s a challenge.”

Phillips added that hunting was a part of his life, engrained in him from childhood.

Report poaching incidents online at MyFWC.com/WildlifeAlert or over the phone at 888-404-3922. Reports can be made anonymously or including names and contact information and potentially earn a $1,000 reward.

Danielle is a reporter for WUFT News who can be reached by emailing news@wuft.org or calling 352-392-6397.
Previous Florida Governor Proposed Protecting College Students’ Right To Party. What Happened?
Next Gainesville Food Truck Park Could Serve Alcohol By Fall