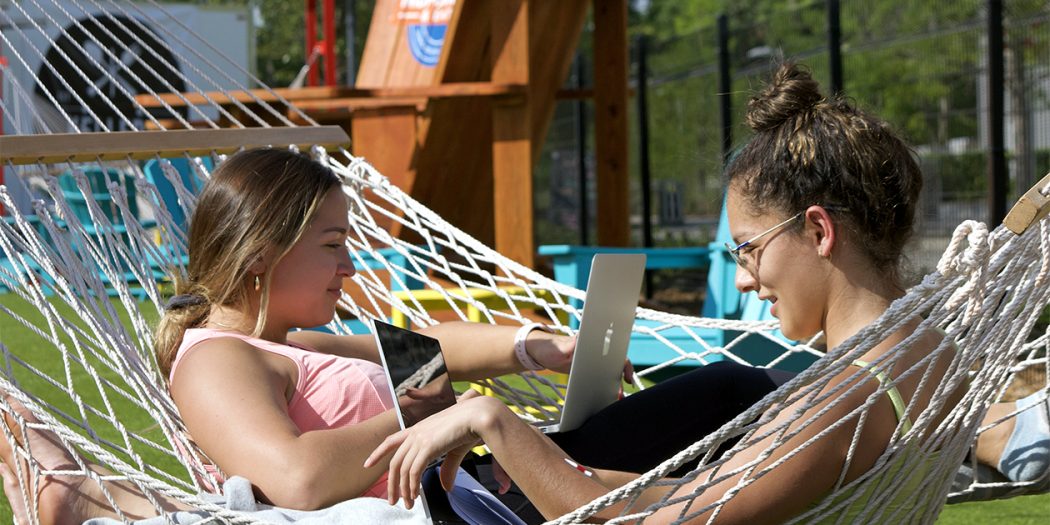 Brianna Henesy (left), 19, a UF marketing freshman, and Veronica De Los Santos, 18, a UF nursing freshman, sit in a hammock at Midpoint Park and Eatery on Wednesday, April 14, 2021. They wandered over from Opus Coffee, which sits across the street from the park, and ordered food from the Da Kine Poke food truck before sitting down to study for upcoming exams. (Julia Coin/WUFT News)

Brooke Stalnaker lost her bartending job when the COVID-19 pandemic closed Gainesville bars. Now, she might be able to bring her passion for curating drink menus to her new food truck.

Just two days after the Midpoint Park and Eatery food truck park opened in March, Rep. Chuck Clemons proposed a bill that would allow the vendors to apply for quota licenses, which allow the sale of alcoholic beverages, wine and beer as well as spirits and liquor.

As the bill made its way through the Florida Legislature, it received virtually no negative feedback, Clemons said in an interview Wednesday. A final decision can be expected by the end of August, just as students return to campus for what may be a return to normalcy for the fall semester after mass vaccinations across the state.

Stalnaker and her fiancé, Jared Keller, opened their food truck, Keller’s Kitchen, in the park on March 8. The couple’s initial goal of serving 100 customers a day has become their new normal.

“Our original plan was to have a mobile truck and do pop-ups like every other food vendor,” she said. “Then we heard about the opportunity here at Midpoint and three days later we signed a lease, and 10 days later we were on property opening our doors.”

Stalnaker would be excited to introduce some of her favorite drinks, including a classic old fashioned, to the menu. Their food selection already includes shareable dishes that would pair well with drinks, like loaded fries and a large serving of brussels sprouts.

Above: Brooke Stalnaker shares her experience opening up a food truck with her fiancé and envisions what they would do with an alcohol license. (Julia Coin/WUFT News)

Should the bill become law, all alcohol sold from the trucks must be kept locked up before serving, and drinks would not be permitted outside the food truck park, an area defined in the bill as land with three or more stationary pads designed specifically for food truck use. It must have connections to electricity, restrooms with plumbing and handwashing stations and central solid waste disposal areas and recycling facilities.

Herman Camarena, one of Da Kine Poke’s food truck owners, said that while the ability to sell alcoholic drinks would drive some traffic to their truck in the park, it wouldn’t be critical to their profitability.

“I think it would do awesome here,” he said. “If you want to go out and get some drinks but you’re with somefriends who are hungry, you can check all the boxes.”

Clemons compared the bill to one that allowed Celebration Pointe to have an open container policy within its property, and said he would be excited to see the concept expand to other food truck parks in the future.

“This is new, it hasn’t been done before in Florida,” Clemons said. “It would be an innovative way to provide an opportunity for nightlife in that particular area, but it would also provide a way for food trucks to sustain themselves with more than just food receipts.”

The bill is also revenue neutral, meaning it wouldn’t cost the state government any money to implement.

Matthew Luedecke, Trimark Properties’ director of commercial properties, said the park was created in response to feedback from tenants in nearby office buildings about a lack of lunch options in the immediate area. Because long-term plans for the area involve multi-story structures, building a single-story restaurant that would be knocked down and redeveloped in five to 10 years didn’t make much sense, he said.

“We don’t see this as a profitable venture, in fact it’s not,” he said. “We see it as more of an amenity for our other tenants both in the office and our residential departments.”

The structure of the park, including upkeep of the trailers’ structure, plumbing and drainage, can get expensive, but the point of the project was to allow food truck owners to enter the restaurant business at a more feasible price of around $10,000, not necessarily for the real estate company have another source of profit.

He thinks the bill could elevate the park and make it more enjoyable for people who live nearby.

Daryn Pearlstein, 21, a UF psychology senior, lives less than a 10-minute walk away from the food truck park. She’s eaten at the park three or four times since it opened last month. Being vegan, Pearlstein likes that there’s something for her and all her friends; they don’t have to find one place that would cater to her.

“It would be so convenient to be able to get drinks here,” she said. “We wouldn’t even have to drive, which is always a bummer when going out for drinks. We always end up a little bit confined with either somebody being the designated driver or having to wait until somebody is sober.”

Julia is a reporter for WUFT News who can be reached by calling 352-392-6397 or emailing news@wuft.org.
Previous The Hunt Is On – But Where? A Tale Of Two Different Hunting Experiences Nestled In Florida’s Wild Backbone
Next Alachua County Beekeepers Share Joys And Challenges Of Keeping Bees Buzzing In Central Florida

Following the creation of a tiny house resort and the addition of a market, Homestead …