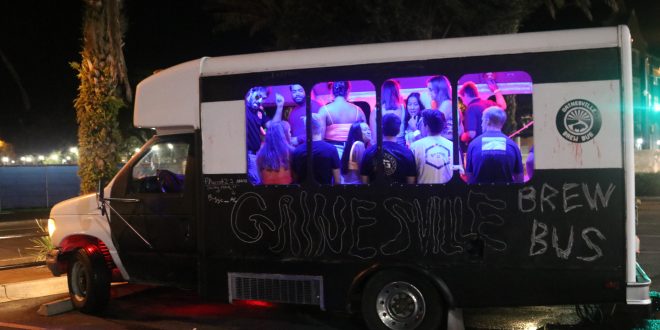 The Gainsville Brew Bus, a common sight for Midtown partiers, packs up students in order to “Deliver meaningful and memorable experiences to our community and patrons,” according to its company's website. (Timothy Williams/WUFT News)

By Meleah Lyden and Emma McAvoy

To party or not to party? As college students across Florida wrestled during the pandemic over public health restrictions, including whether it was safe to visit bars, nightclubs or house parties, Gov. Ron DeSantis weighed in.

The Republican governor said Florida was exploring a bill of rights that would protect students – generally at lower risk from the virus – from being punished by their universities if they violated social-distancing rules, mask-wearing violations or other public health measures.

“It’s incredibly draconian that a student would get potentially expelled for going to a party,” DeSantis said in September. “That’s what college kids do, and they’re at low risk. And I just think that we’ve got to be reasonable about this and really focus the efforts on where the most significant risk is.”

So, what happened to the idea? When he proposed it, the governor generated headlines across Florida. Since then, nothing. By Friday, the final day of the legislative session, no such bill had emerged.

Despite the governor’s remarks, college students across Florida have been punished for failing to comply with health rules.

The University of Florida, the state’s flagship school, placed 20 students and four fraternities on interim suspension in fall, spokesman Steve Orlando said. The university has recorded more total COVID-19 cases since March 2020 – just shy of 10,000 infections – than any other school in the U.S.

Beta Theta Pi, for example, was cited for hosting a party on its property for more than 50 people with loud music and beer pong. Another fraternity, Phi Delta Theta, also hosted an illicit party with more than 50 people, with some not wearing face masks, the university said.

The president at Florida Gulf Coast University in Fort Myers, Mike Martin, said that the school suspended students for leaving their designated quarantine spaces while infected with COVID-19, which violates their student code of conduct. Beverly Brown, the executive assistant to Martin, said 12 students were suspended in the fall and spring.

“I had a couple of students and some others saying ‘well, it’s my Constitutional right not to wear a mask,’” Martin said. “The Constitution doesn’t allow you to put other people at risk. And we’ve continued to make that case.”

Why did the governor make no apparent progress toward a right-to-party bill?

Responding to inquiries over several months, the governor’s office said it would reveal more details about the governor’s plans once it knew. Since DeSantis promised the bill, he has entertained thoughts of a presidential campaign in 2024; wrestled with distributing vaccines across Florida; pushed an aggressively conservative agenda through the Legislature; and tangled with the CBS news program 60 Minutes over a report that said, without evidence, that he turned over the state’s vaccination program in some areas to Publix Super Markets Inc. in exchange for campaign contributions.

The governor also has been a regular fixture on conservative television programs, where he was lauded for the lack of health-related restrictions he enacted in Florida – even though that left local government officials to pass tougher rules to protect residents.

How could DeSantis have done what he promised? He had options. He could have issued a statewide executive order, proposed a bill for the Legislature or sought to amend the state’s Constitution, said Mary Adkins, a law professor at the University of Florida.

“It wouldn’t actually be a bill of rights in the way we think of one,” Adkins said.

Adkins said a bill-turned-law might have been moot, anyway, as the vaccine becomes more widely available. A constitutional amendment would take even longer, as it wouldn’t get on the ballot until 2022 — by which point COVID-19 could already be under control.

Timing issues aside, DeSantis has broad executive powers and could have ordered universities not to take any kind of action against students who party without masks or socially distancing, Adkins said.

Lawmakers in Florida were mixed on the idea of a formal bill.

Sen. Keith Perry, a Republican representing the district in Gainesville that includes the University of Florida, said students should be allowed to behave how they want. He said he would have needed to see details of any legislative protection before supporting them.

Perry and his family already had the virus, he said. He said he believes public universities and other government agencies shouldn’t enact policies affecting what he described as basic civil rights.

“I could take every right away from you and protect you. I could say you can’t drink alcohol. You can’t smoke cigarettes. You can’t eat McDonald’s burgers,” he said. “I can do a lot to protect you, but is that the direction we want to go?”

“Students’ needs are important, but this is another attempt at political propaganda,” Eskamani said.

“It’s a unique moment in American history where we have politicians with no experience in public health making proclamations about what people should or shouldn’t do,” he said.

Dodson said students probably won’t die if infected, but they could easily spread it to high-risk populations. He said bars should have been closed and restaurants limited to 25% capacity to slow the spread of the virus.

The governor may have believed that, despite the pandemic, college students should be able to enjoy a traditional experience, said University of Central Florida political science professor Aubrey Jewett.

“It does kind of fit his overall approach to the pandemic,” he said. “He does take it seriously, but he thinks that the best thing to do overall is to reopen, and to try to reopen in a way that’s as normal as possible.”

The president at Florida Gulf Coast University said he thought the governor’s remarks about partying were off-the-cuff and designed to gain popularity among some college students. Republicans have struggled to attract political support from young adults in Florida and elsewhere.

“Our students understood that that may be a broad statement about your right to be a college student,” he said, “but it does not abrogate your right to protect your fellow citizen.”

Meleah is a reporter for WUFT News who can be reached by calling 352-392-6397 or emailing news@wuft.org.
Previous UF Health, Florida Department Of Health In Alachua County Address Vaccine Concerns
Next The Hunt Is On – But Where? A Tale Of Two Different Hunting Experiences Nestled In Florida’s Wild Backbone