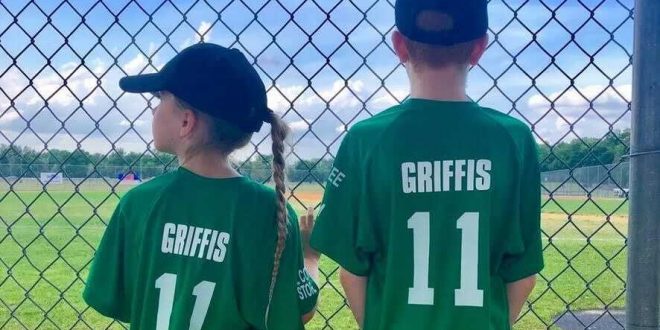 Six-year-old Emily Griffis and 8-year-old Justin Griffis look out at Bobby Lee Alday field in Micanopy. Emily is on the T-ball team and Justin is on the Rookies baseball team. (Photo courtesy of Monica Griffis)

‘Our Children Are Loving Every Second Of This’: Youth Sports Return to Micanopy

“Our children are loving every second of this,” his mother, Charlotte McElroy, said of her son and the rest of the new Micanopy Babe Ruth Rookies baseball team.

After a hiatus of more than 10 years, youth sports is back in Micanopy.

The trophies had collected dust in a Town Hall cabinet, and ant colonies took over Bobby Lee Alday field in the Carson M. Roberts sports complex. That is until Bishop Chris Stokes, 56, senior pastor at The New Beginning Christian Worship Center, got involved.

“For those who have been waiting – the wait is over,” said Stokes, who in October began initiating community planning for a new Micanopy Athletic Association to revive youth sports.

Mike Roberts, a town commissioner since 2014, said the association’s predecessor, the Micanopy Area Recreation Cooperative, fizzled out because many of the players and families involved aged out of the league and began playing in high school instead. The complex is named after his father, Carson Roberts, who donated the ballpark property to the town.

There are now three T-ball and baseball teams practicing after over 30 children registered. A grand opening game day was planned at the Carson M. Roberts Sports Complex on April 17, however, it was canceled due to rain and will not be rescheduled, Stokes said.

Every spectator must follow state COVID-19 guidelines when attending games and practices, including social distancing, and some may choose to wear a mask though outside, Stokes said. The ballpark is regularly pressure washed and cleaned with bleach for added protection.

“Many have already been vaccinated,” Stokes said of the adult fans who may come.

As for the elementary school-aged players, each team has a “mom” who supervises a process.

“Every player has their own personal equipment,” Stokes said. “They have their own bat, their own helmet and their own glove, so there is no exchange of equipment among players.”

“I would come from my treatment and work on this,” he said while noting that he is doing well. “To be able to see it finally come together, and see kids enjoying life as a kid is rewarding.”

The association’s long-term plan is to add a new sport every year, including softball, flag football, soccer and basketball, he said.

“We have a complex that would accommodate every one of those sports, so why not utilize what we have?” Stokes asked.

Monica Griffis, 38, said her children needed a youth sports outlet after a long year of the coronavirus pandemic. She is a team mom, and her 6-year-old daughter Emily is on the T-ball team and 8-year-old son Justin is on the Rookies team.

“It couldn’t have come at a better time,” Griffis said. “They are elated to have sports back in Micanopy. We are all so grateful for everyone who has made this possible.”

Roberts said he previously tried to bring back youth sports to Micanopy but failed.

“The town at the time felt that we could not afford to do it,” he said. “I brought it forward twice and it was declined both times.”

Noting that Micanopy has a rich history of sports – with a football and baseball team that went undefeated for several years in the 1970s – he added: “Sports is a good thing for kids. It teaches responsibility, it teaches character in people.”

Mayor Joe Aufmuth agreed and said youth sports waned in Micanopy because, as in any tiny community, the town depends so heavily on volunteers and their service ebbs and flows.

“He has really taken it by the reins and has done a great job,” the mayor said.

The town commission voted March 9 to give the association $1,000 more for whatever it needed. The town keeps up the fields so they are “safe and usable,” Aufmuth said.

He added: “We have a post office, we have a fire station, we have some shops downtown – and now with sports going, we really do have a better sense of community.”

Josh is a reporter for WUFT News who can be reached by calling 352-392-6397 or emailing news@wuft.org.
Previous Child Abuse Prevention Month Follows ‘Increase In Child Abuse Cases’ In Alachua County
Next City of Gainesville Adopts New Rental Ordinance, Takes Effect in October