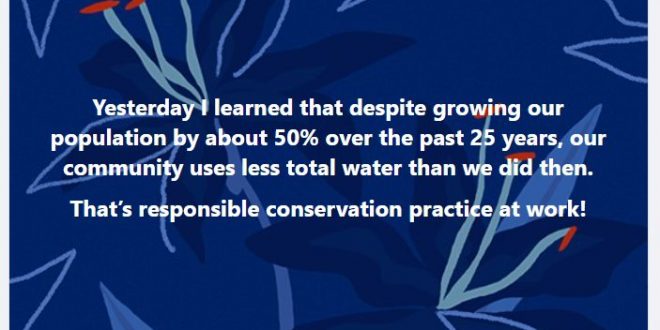 Gainesville’s Residential Water Usage Two-Thirds Of What It Was 25 Years Ago, Despite Population Growth

Gainesville City Commissioner Harvey Ward recently made an eye-catching and hopeful claim on his Facebook page.

“Despite growing our population by about 50% over the past 25 years,” he wrote, “our community uses less total water than we did then.”

The figure doesn’t quite show the full picture, though, according to Jenn McElroy, the supervising engineer utility designer at Gainesville Regional Utilities. The figure Ward posted on social media may refer to residential water use only.

“It can be a little bit trickier with commercial because there’s a lot of different things that could be involved with the water use,” McElroy said. “So, in general, whenever we’re talking about our conservation, it’s really easy and clean to talk about residential use.”

McElroy said total water usage today is actually the same as it was 25 years ago: about 22 million gallons per day. But the decrease in residential water usage may partly account for how total usage has been able to remain constant despite the population growing by half.

When asked what caused this decrease, McElroy pointed to 2006, when Gainesville Regional Utilities implemented a strategy called conservation rate.

Before 2006, residents paid the same price per thousand gallons of water no matter how much they used. After the implementation of the conservation rate, the water price became higher when residents used more than a certain amount.

McElroy said this pricing system aims to drive residents to change their behavior and conserve water.

According to Ward, decreased water usage is not only the result of the conservation rate, but of decades of intentional conservation work, and education is the key.

“We have very aggressively pursued water conservation programs for utility and tried to help people understand and better educate them on the importance of water conservation,” Ward said. “We’ve made great steps in educating people that you don’t have to put a lot of irrigation on your lawn.”

McElroy said GRU partners with stakeholders regionally and across the state who have helped contribute to the decrease, along with customers who are equally concerned about conservation.

“I don’t think it’s just price signal,” McElroy said, “I do think there is a lot of really intentional effort. We really only have one water and we’re trying to protect it.”

Zhe is a reporter for WUFT News who can be reached by calling 352-392-6397 or emailing news@wuft.org.
Previous City of Gainesville Adopts New Rental Ordinance, Takes Effect in October
Next Gainesville, UF Police Using License Plate Cameras To Fight Car-Related Crimes