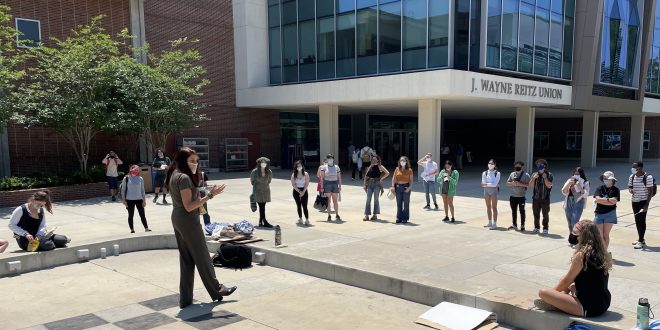 Dressed as Mother Earth, Sarah Younger and a group of 20 students gathered Thursday outside of the Reitz Union on the University of Florida campus.

“Your mother is here just to let you know she loves you,” said Younger, chair of the Suwannee St. Johns Group Sierra Club.

The group was there to protest the University of Florida’s use of prison labor, the climate crisis and to raise awareness about related problems facing Florida residents, such as extreme weather, food injustice, a lack of clean energy and threats to clean water.

Inside Reitz Union, chants such as “Gator Dining, shame on you, food workers deserve rights too” echoed through the halls as protesters marched holding signs, encouraging incoming students not to buy meal plans as they stood in line to get quotes for the food contract.

“There is no environmental justice without food justice, without racial justice,” said Abby Forsyth, vice president of Florida PIRG Students, which advocates for various issues of public interests, such as food security, affordable education and healthcare.

Forsyth spoke on the importance of student power and the need for everyone to tackle the “larger-than-life” problems that face the Earth.

“Everything that makes living in Florida so amazing is at risk because of climate change, our coastline, the Everglades, even Paynes Prairie,” said Forsyth. “We are already seeing these impacts: There’s stronger storms, flooding throughout the state, and record setting heat year after year.”

Through campaigns with the Florida PIRG Students, Forsyth and other members across the state are calling on university campuses to commit to 100% renewable energy by 2040. This semester their goal was to get a 100% commitment from UF’s President Kent Fuchs and Board of Trustees by December of 2022. So far, the group has collected over 900 petition signatures, received endorsements from the faculty and other student groups and recently the Student Government passed the resolution.

Matthew Williams, UF’s director of the Office of Sustainability, reached out to the president of Florida PIRG Students, Evan Smith, for a meeting to talk about incorporating their resolution into a new climate action plan on campus.

Student activists’ efforts echo efforts nationwide to curb climate change. On Tuesday, U.S. Sen. Edward J. Markey, D-Massachusetts, and U.S. Rep. Alexandria Ocasio-Cortez, D-New York, reintroduced the Green New Deal just two years after its initial release. The current goal of the resolution is to generate 100% of the countries power demand through renewable resources and make the country carbon neutral by 2030. The announcement came amid Ocasio-Cortez’s introduction of various climate-related bills this week in Congress, such as The Green New Deal for Public Housing. The bill calls for the investment of $172 billion in 10 years to create 240,000 jobs per year and convert public housing to zero-carbon, energy efficient developments.

In a statement, Markey said that the climate crisis disproportionately affects women, children, Indigenous people, and people of color. These people often lack protection under U.S.. or international law because they do not meet the U.S. definition of refugee. Therefore access to resettlement opportunities is unobtainable.

“We’ve seen water issues in this nation for far too long,” said Alex Smock, HUB coordinator for the Gainesville chapter of the Sunrise Movement, an American youth-led organization that advocates for political action on climate change. “Everyone in this country deserves access to clean water.”

But Smock and other activists said the Biden administration’s plan is not sufficient.

Younger encouraged those gathered for the Earth Day event to think about getting their message out.

“How do we get the message beyond just those of us here today,” she said. “It should be all year. It shouldn’t be just one day.”

Emely is a reporter for WUFT News who can be reached by calling 352-392-6397 or emailing news@wuft.org.
Previous The Point, April 23, 2021: Inside The Florida Prison Program That Helps Inmates Train Dogs
Next University of Florida Professor Resigns Amid Investigations Into Student’s Suicide