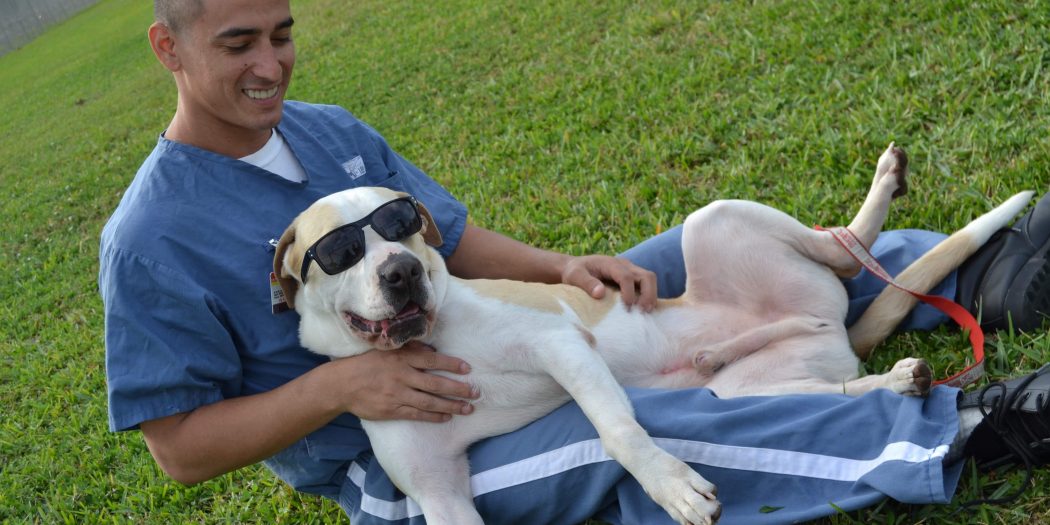 George Warner enjoyed training Trooper, a bull mastiff, while he was an inmate at the Marion County Correctional Institution Work Camp. Trooper was in the first class of dogs trained through the FIDO program in 2015. (Photo courtesy of George Warner)

One former inmate, George Warner, said he worked with around 10 dogs during his time at the camp. One of his favorites: A bull mastiff named Trooper. Warner even taught him a special trick to show at graduation, where the inmates meet the people who will adopt the dogs.

“My trick was – I would say, ‘Go to jail,’ and he would go into his own cage,” Warner said. “He would open his own cage and go inside.”

Dogs from Marion County Animal Services are paired with male inmates who applied to be a part of the Florida Inmates and Dog Obedience Project, or as it’s more commonly known, FIDO. It puts a select number of inmates and dogs together all day and night for eight weeks.

The institution’s K-9 trainer at the time, Officer Michele Haney, helped to create FIDO. She worked at the camp for six years and helped train the program’s first four classes.

“All the dogs did extremely well, and the inmates did very good training the dogs and working with the dogs,” said Haney, who continues to train canines privately these days.

Below: George Warner recalls how he got started with the FIDO program once at the Marion Correctional Institution Work Camp, and how it has helped have a second chance at life. (Lillian Lawson/WUFT News)

Warner joined the first class soon after arriving at the camp in 2015. He had pleaded guilty to charges stemming from a fatal hit-and-run accident in 2013.

“I don’t think they had any real qualifications,” he said of how the first inmates were selected. “It was more of whoever wanted to be involved that got accepted.”

Ninety-four dogs have come FIDO, said Wendy Hillyard, the county animal program specialist who runs it. The men learn dog training, grooming and nutrition information, and the dogs are with the men consistently, even sleeping by their cots in crates.

Once they have completed the course, the dogs are brought to a graduate ceremony, and the inmates get to meet the people and families who have adopted them as pets. The men show off the skills they have taught the animals and spend time getting to know the families.

The inmates and dogs form a bond that connects them even after the animals are adopted.

“The guys who had trained Jane had really grown very attached to her,” said Kate Tropeano, 48, of Ocala, who adopted Jane, a pit bull mix, in November 2018. “And they gave me their information, and said if you want to write us and send us pictures, we’d love it. So I did.”

Nearly 300 prison dog training programs exist across the United States, according to research published by the Evidence-Based Society, an online community of health, human, social and justice service professionals. The research found that they help to reduce recidivism, as the dogs have had great physical and emotional impacts on their trainers.

Warner, now 31, credits FIDO with helping him to make the most of his two years at the work camp. Upon his release in 2017, Warner had trouble finding a career path.

In 2020, he decided to pursue what he had learned from the camp and created his own dog training company: Pet Exercise and Training Services (PETS). Since December, he has trained six dogs through it and hopes to eventually open a daycare for dogs.

“That prison experience was the best thing that could’ve happened to me,” said Warner, who also work as a treatment coordinator at an orthodontics office, “because that’s what drove me to open my business.”

Sarah Bland, 30, adopted a terrier mix, Waco, from FIDO in October 2019. Animal Services found Waco with four other dogs who were fighting for sparsely distributed food to survive.

“When I wanted to adopt a dog, I knew that that was kind of a program that was important to me and I wanted to, kind of, be a part of,” Bland said.

Waco was 3 years old when adopted and is now almost 5. He has come out of his shell and learned how to be a ‘real’ dog, getting along with her 10-year-old son, Bland said.

“I could not be more grateful,” she said. “He’s absolutely the perfect little addition to our family.”

Anthony Giglio, a 38-year-old inmate six years into an 11-year sentence for a DUI manslaughter conviction, has trained a total of 14 dogs while working with FIDO.

“These dogs are the heartbeat of the compound,” Giglio said.

He had to fill out an application and interview with the overseeing officer before getting involved with FIDO. The inmates must also go six months without a disciplinary report.

Giglio has taught dogs to open and close drawers and cabinets, as well as how to turn a light switch off and on. He said the program has enabled him to learn skills to take into the outside world as well as remain productive during his time in the work camp.

“It’s a special sight to see a big, muscle-bound guy full of tattoos baby talking with a puppy,” Giglio said. “You see, these dogs fill a void for a lot of these guys.”

Hillyard has been with Animal Services for over 20 years and enjoys finding the perfect match for FIDO dog graduates and adopters through an intensive application and selection process.

She recognizes that the inmates will most likely not follow Warner’s path and become dog trainers or even live a dog-centered life when they leave the prison.

“But what they will learn is patience and teamwork and the skills needed to make a dog a better-behaved dog,” she said. “And those skills they’re going to keep with them for the rest of their lives.”

FIDO runs solely on donations for everything but food, which is supplied by Mr. Mocha’s Pet Supplies in Belleview. There is no specific number of dogs or classes held per year and the dogs are selected on their backgrounds, Hillyard said.

Speaking for the inmates involved, Giglio said “it’s so rewarding to help a loving family find a new member of their household,” and to give “these wonderful dogs a second chance at life. Because if there’s anyone who knows and appreciates the value of a second chance – it’s us.”

Lillian is a reporter for WUFT News who can be reached by calling 352-392-6397 or emailing news@wuft.org.
Previous The Point, April 22, 2021: A Small Museum In High Springs Is Bursting With Alachua County History
Next Limiting The Treasure Hunters: Florida Senate Passes Bill Tightening Regulations On Those Who Help Recover Unclaimed Property