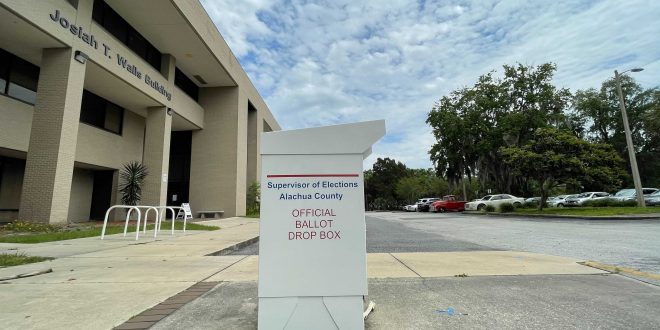 A provision in the proposed Florida law would have required dropboxes like this one outside the Alachua County Supervisor of Elections office to be monitored. (Grace Banahan/WUFT News)

A proposed bill in the Florida Legislature is calling for increased voting regulations, including limiting ballot drop-off box hours and requiring a wet signature on file. All 67 of Florida’s Supervisors of Elections oppose the bill.

The election administration bill, SB 90, has currently passed through all three of its Senate committees, but was postponed on its second reading on Tuesday. Its comparable bill in the House, HB 7041, has passed through two of its three committees and resides in the House State Affairs Committee.

The bill’s sponsor, Sen. Dennis Baxley, considers the regulations a way of taking a proactive approach to addressing potential election issues in the state.

“I know that safeguarding and maintaining the integrity of our elections is important to all of us,” Baxley said during a committee hearing. “It wasn’t that long ago that we were the butt of every joke about elections.”

The president of the Florida Supervisors of Elections and the Hillsborough County Supervisor of Elections Craig Latimer believes this bill would add obstacles to voters.

“To me, this bill doesn’t make any sense,” he said. “Why would you try to make it harder on the voter?”

The signature matching addition to the bill requires supervisors to compare a pen-on-paper signature with a voter’s current signature. Without a paper, or “wet,” signature on file, the ballot must be rejected.

These measures are proposed in the name of combating voter fraud, which Latimer considers a non-issue.

“I haven’t seen any fraud and I haven’t heard one of the legislators cite a specific incident of fraud as they debated the bill,” he said.

Even if fraud was a prevalent issue in the state, Latimer said the signature regulations the bill calls for wouldn’t do anything to stop it.

“If you go to a driver’s license bureau there’s actually an official in front of you that’s watching you sign,” he said. “If you go to vote in-person, there’s somebody watching you give us that signature. To me, this bill in no way, shape or form can do anything to curb any voter fraud that may be occurring.”

A previous version of the bill called for completely banning drop boxes, but an amendment changed the language to allow for drop boxes during early voting hours. Latimer still sees administrative issues with the regulations of the boxes.

“With the amendment, drop boxes are only available during early voting hours,” he said. “Well, what about before early voting starts and after early voting ends? How will you get your ballot back to me?”

In Florida, ballots are mailed out during a 7-day window between 40 and 33 days before an election as required by state law. Latimer said this bill will affect the voters who immediately fill out their ballots and drop them off at a ballot box well before early voting begins.

Currently, Hillsborough County has four drop boxes that are available outside of early voting, as well as boxes at all early voting sites. This bill would prohibit the operation of those drop boxes, a condition that Latimer said might result in their removal.

“With the way this is written, I would have to remove drop boxes,” he said.

Hillsborough County isn’t the only county that would have to change their drop box practices if the proposed bill becomes law. Bradford County Supervisor of Elections Amanda Seyfang said the requirements laid out in the bill would be impractical for the county.

According to the bill text, ballot drop boxes must be monitored in-person by an employee. Since 2001, the Bradford County Supervisors of Elections Office typically runs an entire election with a three-person staff.

For the rural county, designating an employee to watch the drop box is a waste of resources.

“I could not give up one of my staff members to just sit at our drop box all day long, nor could I afford with my budget to hire another staff member just to do that,” Seyfang said.

Bradford County’s ballot drop box has been located outside the courthouse in Starke ever since drop boxes were allowed. Seyfang says it was used significantly even before the pandemic.

“If the bill passes with that current language, I would have to just pull my drop box,” Seyfang said. “There’s no way a county my size could afford it.”

Bradford County’s drop box is under 24/7 video surveillance. In the 2020 general election, 1,073 of the 3,844 returned vote-by-mail ballots were returned at the drop box location.

Seyfang’s main worry is the voters who have no wet signature to be compared. The Florida Legislature passed a law in 2015 that allowed digital voter registration beginning in 2017.

“If anybody has registered to vote for the first time since the law allowed it back in 2017, we would not have a wet signature on file for them,” Seyfang said. “That’s a lot of voters if you think about the increases in voter registration since 2017.”

Grace is a reporter for WUFT News who can be reached by calling 352-392-6397 or emailing news@wuft.org.
Previous For Fans Of Local History, High Springs Museum Is A Hidden Treasure
Next How Gainesville Designated April As Arab American Heritage Month Two Years Before The US Government