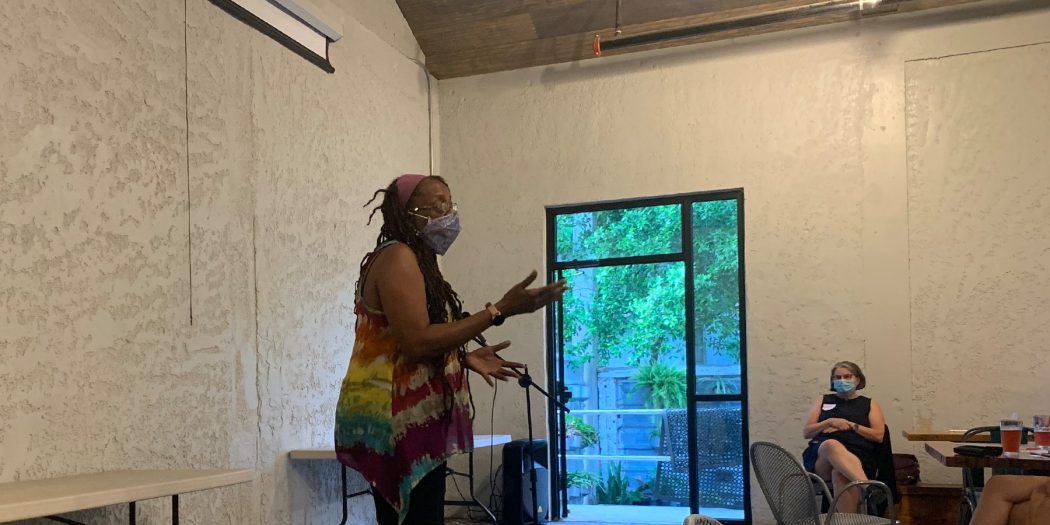 Nkwanda Jah speaks on gentrification and how it is an issue that must be discussed in the community. (Tyler Adams/WUFT News)

As the nation continues to cope with the coronavirus pandemic, members of the Gainesville community have turned their attention to social justice issues like gentrification.

On Thursday night, UF Ethics group Intersections on Ethics in the Public Sphere hosted a community discussion at Cypress & Grove Brewery. The topic of the night was gentrification, a process by which wealthy people in a community bring changes to a low-income area, often creating better housing and attracting new businesses. While it might sound beneficial to everyone, gentrification typically displaces the current residents who have built their lives and raised their families there.

Nkwanda Jah, the guest speaker at Thursday night’s event, wants the community to be aware of the racism underlying gentrification.

“I’ve watched what has happened to the community,” Jah said, “and it’s not good for people that look like me.”

Jah, the executive director of the Cultural Arts Coalition, has lived in Gainesville for nearly 40 years. She said she has seen firsthand the gentrification of communities around her.

“They took Seminary Lane. Those were apartments for people that had challenged incomes,” she said. “Where are those people?”

Seminary Lane was part of the Fifth Avenue neighborhood, a historically Black community in Gainesville. Late last year, a state judge approved a development in the area that could lead to further displacement of nearby residents who might not be able to afford to live there.

In the eyes of Jah and the Intersections group, stories like these represent history being erased. These are communities whose stories are being set aside in favor of making money. Jah insisted that the issue is a lack of humanity.

“My one word is caring,” Jah said. “If we could just care about each other.”

Jah explained that it is important for people to come together and discuss these issues. She challenged the audience to have difficult conversations with their friends.

Hence the creation of groups such as Intersections.

“One of our main goals is to provide opportunities and resources and support for people to have good, constructive, well-informed conversations about issues that are hard to talk about,” she said.

The group sees ethics as an essential part of life and a defining trait of a good community.

The virus, in a way, forced people to look at each other’s humanity and examine their own communities. Leaving communities across the nation at a crossroads in which the direction is determined by the conversations about community ethical issues.

Sophia Acord, Associate Director of the Humanities Center at UF and also a member of Intersections, wants to answer the question: “How can we engage ethical issues in public life?”

She sees Thursday night’s discussions as a great example of the ways communities can bring these issues to light and stop ignoring them because they are difficult to talk about.

Christopher Lomelin, another member of Intersections, explained that their group gets together for these discussions as part of an “ethics café.” Intersections has been doing ethics cafés on UF’s campus for a few years but wanted to expand into the community. Thursday night’s event was the first off-campus event held by the group.

Lomelin has lived in the same neighborhood for years and has seen gentrification firsthand in his community.

“A lot of people renting have been displaced,” he said, “and what’s happening in this neighborhood pales in comparison to historically Black neighborhoods.”

With continued development in these communities, they will start to look very different. Jah said they will soon be unrecognizable.

“There’s a lot of history in this community,” she said, “and in another ten years you won’t be able to tell at all. That concerns me.”

The group discussed solutions and ways to slow and even stop gentrification. Among those solutions was buying the properties before the corporations get their hands on them. Jah insisted that was important, but that it all starts with conversations and awareness.

Tyler is a reporter for WUFT News who can be reached by calling 352-392-6397 or emailing news@wuft.org.
Previous Florida For Two Years Considered Adding More Toll Roads, And Now Much Of That Idea Is Likely Dead
Next Drop The Mask Mandate? Not Until 70% Are Vaccinated And Daily Local COVID Cases Are Under 10, Gainesville City Commissioners Decide