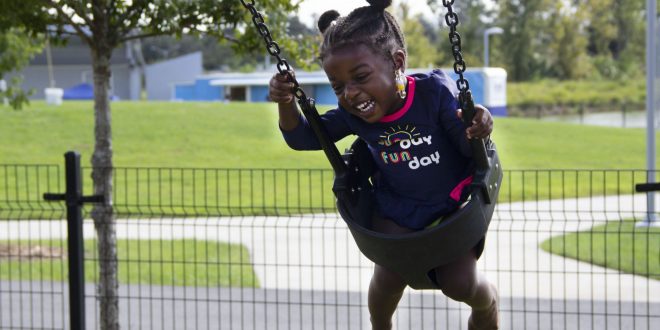 Kiana King, 2, enjoys rocking back and forth on a swing set at Depot Park, located near downtown Gainesville. The park's successful decade-plus redevelopment of the area's downtown evolution. "She always loves coming here for the swings," said Calvin King, Kiana's dad, who came along with her to the park. (Adrian Casaretto/WUFT News)

Gainesville city commissioners were eager to hear the results on Thursday of the 2021 Neighbor Survey presented at their biweekly meeting at City Hall.

By conducting this survey, the city sought to find out how satisfied or not Gainesville residents are with various city services. The information gathered by the survey will be used to further guide the priorities and agenda of the commission and city government as a whole.

Similar to last year’s survey, the 2021 Neighbor Survey was conducted by the ETC Institute. The city spent about $38,000 to conduct this year’s survey.

Over 9,000 paper surveys were randomly sent out to residents of the city; 1,003 surveys were completed and returned.

In his presentation to the city commission on Thursday, Jason Morado, director of community research for ETC Institute, said the demographics of those who responded to the survey accurately reflected the population of the city. Morado also noted that the four Gainesville commission districts were equally represented, as 250 surveys came from each district.

Survey questions also tackled other important topics, including policing and the city’s response to the COVID-19 pandemic. In regard to the former, 82% of respondents stated that they felt very confident or somewhat confident that they would be treated with courtesy and respect by the Gainesville Police Department. 69% of individuals were satisfied with the way city leaders have responded to the COVID-19 pandemic, which is significantly higher than the satisfaction rate seen in other cities in the southeast region of the country, according to Morado.

To help guide the city’s future plans, the survey also analyzed the top issues that respondents felt the city needs to address. These issues covered various categories of city services, including quality of life, mobility and maintenance.

The survey found that the highest priority item for residents regarding quality of life is the availability of employment opportunities. This was followed up by the overall cost of living in Gainesville and the availability of mental health care. The survey also revealed that residents believe the city should prioritize solving issues regarding public parking and the high levels of traffic flow of major streets. 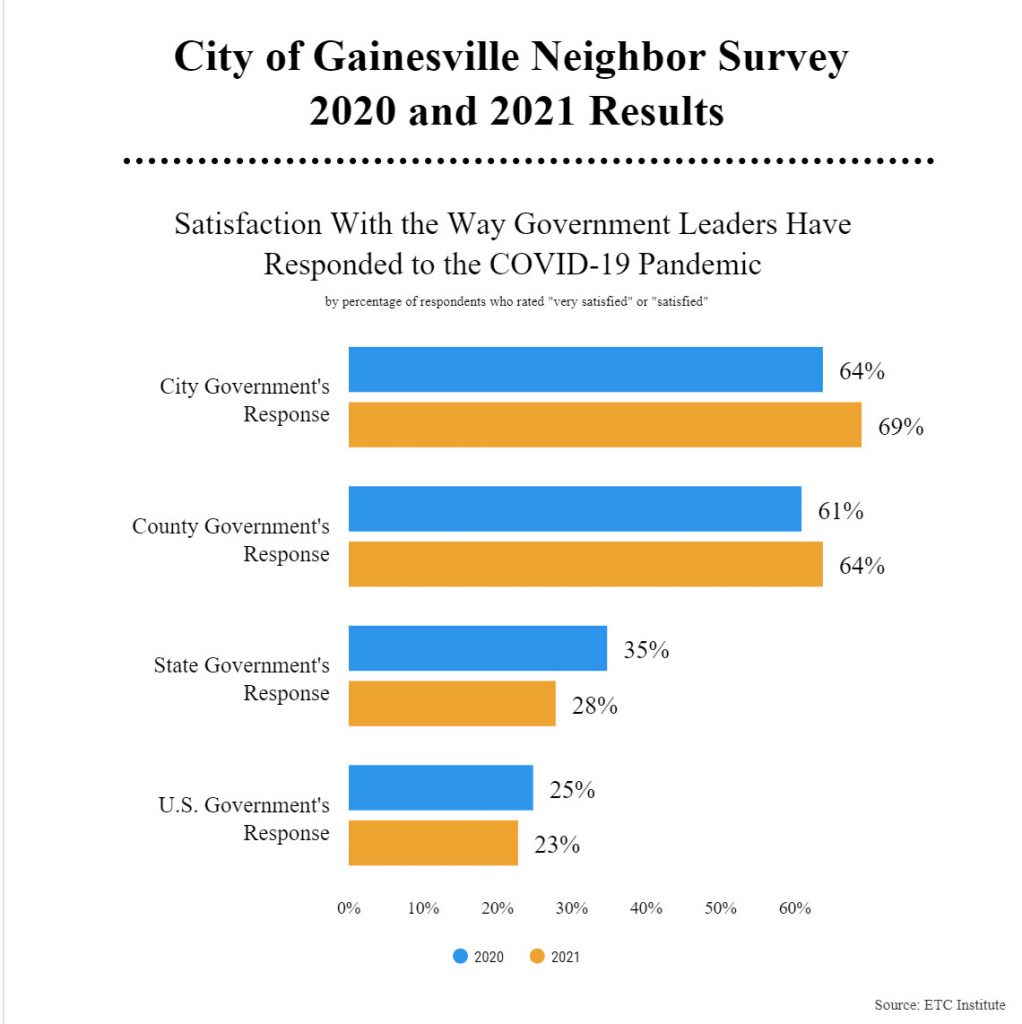 The issues identified as the top priorities for the city have not changed much since the 2020 survey, as traffic flow on major streets, overall cost of living and employment opportunities were labeled as the three highest priority items that the city must address in the 2020 survey.

Resident input from the 2020 survey showed that most residents would recommend Gainesville as a place to live, rating the city high in quality health care. The 2020 survey results also showed that image of city government, costs of living in the city and job opportunities were not rated highly. The survey of 2021 showed a 4% or higher increase in public opinion for the city.

Though similar questions were asked between the 2020 and 2021 surveys, Morado said that this year’s survey showed that residents are increasingly satisfied with certain city services. For instance, the level of satisfaction regarding the city’s response to the COVID-19 pandemic increased by 5% since the 2020 survey.

During the presentation, District 1 Commissioner, Gigi Simmons raised some concerns about the accuracy of comparing the results from the 2020 survey to the new survey data. She said that her concerns stemmed from the fact that the previous survey was conducted between May and June of 2020, which was towards the beginning of the pandemic.

“I’m just concerned about the comparisons because this was conducted in the height of the pandemic,” Simmons said.

She furthered by saying that she was concerned that the priorities and attitudes held by participants and expressed in the 2021 survey might have been impacted after experiencing a full year of the pandemic.

Morado stated that her concerns were valid, as the context of the pandemic needs to be considered. However, the results of the surveys were not drastically different enough to raise concerns, as there were a lot of areas where there was little change from the previous survey.

“Certainly, the pandemic makes things very unique, what we’re going through right now,” he said. “So, we have to take that into consideration when we’re viewing results.”

Morado also cited that the top three priorities listed by respondents did not change much, as the ones listed in 2021 were similar to the ones recorded the year prior.

As the presentation concluded, Gainesville Mayor Lauren Poe expressed his thoughts on the results, stating that there were some he expected, and others he was pleasantly surprised by. Poe was optimistic that the data from this survey would be a useful tool in guiding the city’s future plans.

“There’s just a lot of good news in there and obviously some guidance on some things that we need to work on and pay a little closer attention to,” he said. “Overall, this is very helpful information and is very important as we go into our strategic planning session to make sure that we’re focusing on the priorities that our community identifies as top of the list.”

Haleigh is a reporter for WUFT News who can be reached by calling 352-392-6397 or emailing news@wuft.org.
Previous The Point, April 16, 2021: Spotlighting Some Of The Factors Influencing Alachua County’s Racial Equity Problem
Next Florida For Two Years Considered Adding More Toll Roads, And Now Much Of That Idea Is Likely Dead