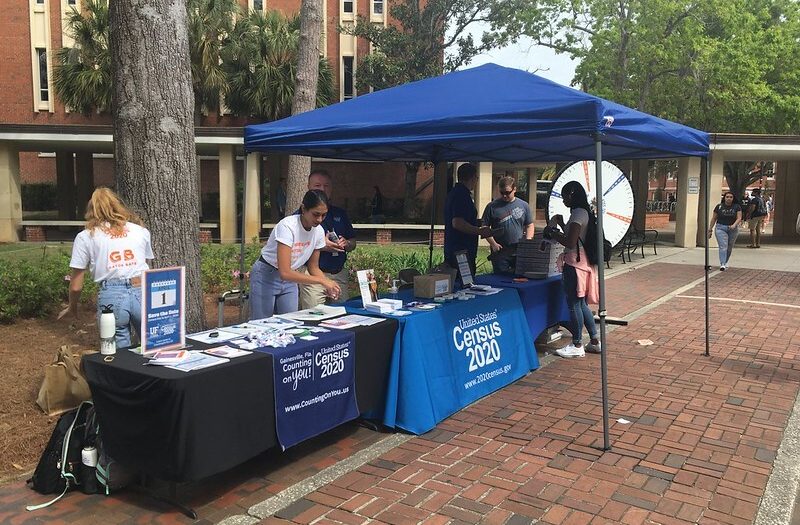 Students table to mobilize students to fill out the census at Plaza of the Americas on March 10, 2020. The City of Gainesville and Alachua County focused their outreach efforts on students through partnerships at UF. (Photo courtesy of Dorothy Zimmerman)

When Basma Alawee filled out the census, she knew there was no box she could check to properly represent her in the count.

Alawee checked the “other” box and wrote down Arab American/Iraqi. As the refugee organizer for the Florida Immigrant Coalition, she encouraged other Arab Americans in Alachua County and around the state to do the same.

The coalition began planning census outreach for immigrant communities throughout Florida in late 2019. She partnered with the Arab American Institute to better reach Arab communities.

The initiative helped translate materials and held in-person events at cultural stores and restaurants Arabs frequent. It even established a helpline and other virtual events to ensure Arab Americans were counted in the census during the pandemic.

“But of course, I am sure many people, maybe, have not done that because of the fear of like, ‘Oh, why do I need to identify myself as an Arab? I might be on a specific list,’” Alawee said.

Some Arab Americans fear that information can be used against them, especially through deportations or secret surveillance.

The Arab American Institute, along with other groups, advocated for the U.S. Census Bureau to introduce a Middle Eastern and North African category for decades. Their calls were heard in 2009, when the bureau agreed to run a sample census including the category. Despite widespread support in the Arab community, the Trump administration did not make the change for the 2020 Census.

Arab Americans are currently encouraged to mark themselves down as white on the census. The race question even includes Lebanese and Egyptian as examples that fit under white. The reason why, however, carries a complicated history.

In 1915, a Syrian immigrant named George Dow argued that he was white to obtain an American citizenship. At the time, only white and African immigrants could acquire U.S. citizenship under the naturalization Act of 1870, which barred Asian immigrants. Dow sued the government until a federal judge ruled that Syrians count as white in 1915.

But many challenges persist; not just for Arabs, but other communities across Alachua County.

Students were another key demographic the City of Gainesville and Alachua County focused their outreach efforts on. Alachua County partnered with UF, Santa Fe College, the library districts and the school board, said Sean McLendon, the county’s strategic initiatives manager.

The undercounting of higher education students was the biggest deficit in the 2010 census, McLendon said. About 23,000 individuals were not counted, which resulted in about $390 million less in federal funding over the past decade. Federal funding for programs such as COVID-19 relief, transportation, housing and urban development and Head Start, is often based on population count.

“We knew that that was where a big gap in counting was, and we needed to address it in our outreach plan,” he said.

Traditionally relying on in-person outreach, the county considered alternatives as the pandemic caused many students to leave UF campus and head home, McLendon said. It pushed the federal government to take data from UF’s enrollment information to count the students who were supposed to live in the community at the time.

When the UF records were obtained, the Census Bureau had to remove duplicates to avoid overcounting, said Dorothy Zimmerman, director of communications at the Bob Graham Center for Public Service. She collaborated with McLendon and the UF Office of Community Relations for the census effort.

Already working on civic engagement programs related to the election, Zimmerman planned a large in-person census outreach program that was moved online due to the pandemic. While it did not get the numbers an in-person event would have, it clarified some students’ concerns.

The census stopped data collection in October. The county observed a 98%-99% response rate, McLendon said, but that doesn’t give a proper measure of how many people responded. The federal government will not release official data until later this month..

“This will hopefully be a record year for overcoming some international odds,” McLendon said.

Grethel is a reporter for WUFT News who can be reached by calling 352-392-6397 or emailing news@wuft.org.
Previous ABC Airs New Crime Special About 1990 Gainesville Murders, City Representatives Respond
Next April 6, 2021: Afternoon News In 90