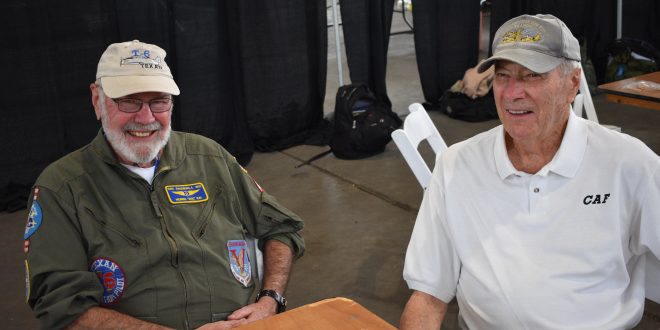 Morris Ray (left) and Jim Munn shared a laugh this weekend as they recalled having trained most of the lead instructors for the North American Trainer Association. (Trey Ecker/WUFT News)

The roar of planes over Gainesville’s airspace that may have startled some this weekend was that of North American Trainer Association members flying in their vintage World War II-era planes.

Carlos Sotolongo, 58, of Daytona, was among the dozens of people who attended. A commercial airline pilot by day, Sotolongo first heard about the association when he was 16 years old. He came hoping to improve his flying skills, but also because of how the membership treats others.

“The people that you meet here are very upstanding individuals,” he said. “They treat everybody respectfully and want everyone to succeed.”

Watch the video below: Members of the North American Trainer Association took to the sky in a Douglas DC-3 on Friday evening to have some fun and share some history of the planes. (Trey Ecker/WUFT News)

Sotolongo was also the many who came to the clinic to start on the path to get certified in formation flying, so they can participate in air shows. For others, though, it was a chance to reconnect with friends and renew their skills.

“This is my extended family,” said Arnold Angelici, 65, of Peachtree City, Georgia. “It is my summer break or my spring break.”

Angelici also said formation flying is a skill set that will deteriorate without practice.

“You’ll notice that as the day wears on, people’s ability to fly the airplane gets better,” he said. “Our paramount plan is to make sure everybody trains consistently and safely. You don’t come here to show off. You come here to learn.”

Sotolongo had been flying T-6s for five to six months, but took to the sky for his first formation flight at a clinic and in a T-6 on Friday. Will Loving, 50, of Richmond, Virginia, sat in the backseat of the plane to monitor Sotolongo’s proficiency flying.

Sotolongo participated in a two-ship formation flight, with Al Herum, 63, of Spruce Creek, near Daytona, taking the lead plane.

“I’ve done formation flying with my friends in the aerobatic world, but never at an organized clinic,” Sotolongo said. “So you want to fly well, so that people realize that you take it seriously and you’re competent.”

The two planes took off from the runway mid-afternoon and flew for about 45 minutes, in right and left echelon formations above Gainesville before touching back down.

“I probably overworked a little bit, learning where to look, how to see it, how to feel the airplane’s movement, how to stay focused on the target points on my leader,” Sotolongo said. “But toward the latter part of the flight, I started to relax and was more comfortable making small adjustments to stay in the perfect place.”

Before every flight there is a briefing during which pilots discuss hand signals, radio calls, formations and emergency procedures. Each flight is followed by a debriefing, when they go over what went well and what needs improvement for the future.

In their debriefing, Loving offered Sotolongo feedback on what could have been done better, such as radio calls, but said his flying was good right out of the gate.

Greg Bergen, 56, of Panama City Beach, has been flying for 40 years but has only about 15 hours of formation flying.

“I’m still really new at this compared to most of the people here,” Bergen said. “I just want to learn, and everybody’s pretty generous with their knowledge.”

For Bergen, though, the event is also about reconnecting with old friends.

“Getting to see ‘Doc Ray’ again was really nice. I spent long hours with him in the fall, and I hadn’t seen him in five months at least,” he said. “That’s been my favorite part of the clinic.”

“Doc Ray” is Morris Ray, 84, of Memphis, Tennessee, a former neurosurgeon who now spends his time flying vintage planes and teaching younger generations of pilots. He has been a flight instructor since 1953 and is a member of the Tennessee Aviation Hall of Fame.

“Neurosurgery and flying are the same,” Ray said. “It’s long hours of boredom punctuated by moments of stark terror.”

Watch the video below: While covering the Gainesville Formation Clinic, WUFT’s Trey Ecker got the chance to fly in a North American T-6 on Friday during a formation flight with members of the North American Trainer Association. (Trey Ecker/WUFT News)

Both Ray and Jim Munn, 84, of Los Angeles, have been volunteering their time to help teach people to fly in formation. For Munn, the training process is two things.

“It’s frustrating because you’re teaching and teaching, and then all of a sudden the light goes on,” he said. “And, when that light goes on, it’s the most satisfying feeling that you’re ever going to have – that what you’ve been teaching them and telling them has finally soaked in.”

Ray and Munn said they have likely trained all of the association’s lead trainers.

“So, we’re sort of the grandfathers,” Ray said.

An Evening Flight in a DC-3

After hours of flying, briefing and debriefing, the association members capped off the day Friday with a sunset ride, including a DC-3, also known as a C-47, and 14 North American T-6s, all taking to the evening sky over Gainesville.

“We had to do a big brief to make sure it was all safe, and that we knew who was going to do what and where the positions were,” Loving said. “But it all went off without a hitch.”

Loving was flying in a T-6 with the Delta group, with the Alpha, Bravo and Charlie groups all taking off in front of him – and the DC-3 in front of them.

“The most stressful part is getting connected at the beginning because everybody takes off in twos,” he said. “Then we have to join up, and it’s all about geometry to join up.”

Sotolongo and Bergen flew in the DC-3 with about 10 other passengers and four flight crew.

Bergen heard about the evening flight through his friend, Eric Zipkin, who was going around and asking people about a DC-3 ride.

“I said ‘sign me up,’” Bergen said. “I’ve never been on a DC-3 before, and this is really the most famous airliner ever built, so I couldn’t pass up the opportunity.”

Trey is a reporter for WUFT News who can be reached by calling 352-392-6397 or emailing news@wuft.org.
Previous The Lede ✓ || Season I Episode III: Add Some Spring in Your Life
Next The Point, April 12, 2021: Back On Track? High Springs-Newberry Rail Trail Idea Resurfaces