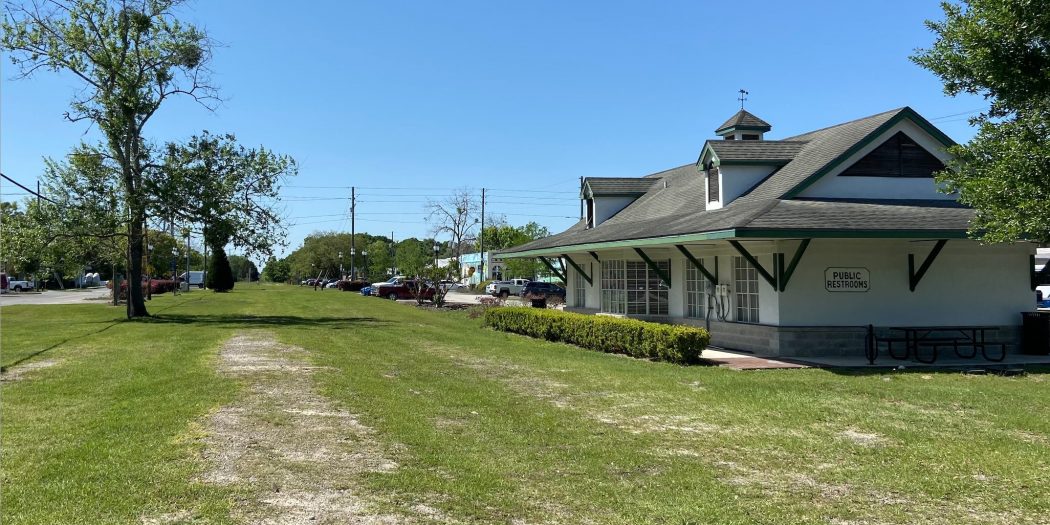 High Springs residents are concerned about the contaminates in the soil left from the railroad. The old railroad tracks run close to where High Springs community events take place, including the weekly farmers market. (Haleigh Donahue/ WUFT)

For Tom and Linda Hewlett, interest in establishing a recreational trail in their community began with the creation of a bicycling club.

The Hewletts, residents of High Springs for 15 years, began their involvement within the community by creating a local High Springs bicycling club: the Yellow Bellied Sliders Bicycling Society. Taking its name after the most common turtle in the High Springs area, the club was established in 2009.

Through their biking, the Hewletts became aware of the abandoned CSX Railway, which runs directly through the downtown area of High Springs. In 2014, after the CSX railroad tracks were pulled from the ground, talk about establishing a rails-to-trails project in High Springs began. For seven years, Tom, 69, and Linda, 70, have been working to establish a permanent multi-use recreational trail within their community.

Discussion of the project was terminated in 2019. Now, the idea is back on the table. On Thursday, Alachua County and High Springs officials again brought up the future of the project in a joint meeting.

In the 1800s, High Springs was a hub for railroads. High Springs City Commissioner Ross Ambrose explained that the railroads were key to the economic development of High Springs. Today, the railroad remains dormant and serves little purpose for the community.

The Newberry to High Springs Rails-to-Trails project hopes to change that. This project would seek to transform the abandoned CSX railway into a paved multi-use recreational trail. The 13-mile-long trail would begin at the Santa Fe River, run through downtown High Springs and extend to the edge of Newberry.

The Hewletts claim the creation of a trail through this project will bring many economic benefits to the community, just as the railway once did. According to Tom Hewlett, the trail is situated in an area that connects to many other trails within Alachua County and northeast Florida.

“Slowly but surely, these trails will get connected, and we’re in the center of all those connections,” Tom Hewlett said.

If the trail were to be established, individuals biking on other trails in the area are likely to pass through High Springs and engage with local restaurants and shops. Linda Hewlett explained that the local bicycle shop, Santa Fe Bicycle Outfitters, would be located right along the recreational trail.

“Bicyclists, when they come into a town, you have to think of them as someone who has a credit card,” Tom Hewlett said. “It will bring people to fill in our shops and put heads on beds in our hotels.”

Tom Hewlett said the establishment of a recreational trail that runs through the center of town makes the city more attractive to businesses looking to expand or relocate. Having a recreational trail in the community is also something many homeowners look for when purchasing a home.

Beyond the potential economic impacts, Tom Hewlett said the establishment of a multi-use trail would also be environmentally beneficial. For one, it would address concerns regarding contaminated soil often found along railways.

When the railways were in use, the railroad companies would often spray chemicals, like arsenic and other herbicides, to prevent plant growth and vegetation near the train tracks. This act of spraying chemicals on the tracks has left lingering chemicals in the soil.

Concerns about the contaminated soil arose because the railway runs directly through major parts of downtown High Springs.

“The things that’s scary for us with all this contamination is that the railway runs right through the middle of town and is right next to our farmers market and where we have our tree lighting ceremony at Christmas,” Tom Hewlett said. “People also walk right across it to access a brand-new High Springs brewery.”

By paving over the soil to create the trail, the pavement would act as a barrier preventing further exposure to the contaminants in the soil.

“What you can do, and it’s the way it’s done everywhere, is that you cap it,” Tom Hewlett said. “It’s the simplest management practice that there is.”

He noted that this act of capping contaminated soil also occurred when Depot Park was created in Gainesville, which was once a train station.

Ambrose said the creation of a trail would also be beneficial in protecting native plants and animals. He said abandoned railroad corridors often allow for animals to move and through and live in urban areas in a protected environment.

“Not only is it an economic tool, it really is a conservation and environmental tool,” he said.

Alachua County and CSX began negotiations in 2014 on purchasing the rail corridor.

In 2019, the two parties came to an agreement on a purchase price of $3.25 million. The county was planning on funding this project through its Wild Spaces Public Places sales tax fund. At the time, the city of High Springs was willing to contribute $300,000 to the project, too.

Beyond the purchase of the land, the county estimated that it would cost an additional $12 million to pave the trail with asphalt. There was also debate over which party would be responsible for funding the estimated $1.3 million needed to remove the soil pollutants.

Though CSX verbally agreed to the negotiated purchase price, later that year, it backed out of the deal and ceased further negotiations.

Ambrose said CSX and its partners are open to reviving the conversation with the county.

During the joint meeting between Alachua County and High Springs on Thursday, members of the Alachua County Board of County Commissioners expressed their support and interest in moving forward with this project.

“I just want to thank the folks in High Springs who have been working on this because I know that there is a large group here in our area who also see the importance of having rails to trails throughout our county,” said Alachua County Commissioner Marihelen Wheeler.

County Commissioner Anna Prizzia noted that the money initially set aside for this project has since been reallocated. She also estimated that funding through the Wild Spaces Public Places fund would not be available until 2024.

The board unanimously agreed to begin working with High Springs and Newberry to assist with negotiations and explore opportunities for funding.

“I would love to see our staff work with High Springs to explore grant opportunities,” Prizzia said. “I, for one, want to see a project like this move forward.”

Ambrose hopes that the county will take interest in promoting recreation within High Springs by working on this project with the city. He explained that other cities have seen recent partnerships with the county for new recreational projects, including the new equestrian center and fairgrounds in Newberry.

“We need to have the same kind of investments being made for recreation, tourism and the development of our economies out here as we’re seeing in other parts of the county,” he said. “I think it’s time for High Springs to have access to some of those resources, too.”

At a city level, Ambrose said he has seen a lot of support within the High Springs City Commission for this project.

“I’m a proponent of us doing something with this property that has not been used and has not benefitted us economically for many years at this point,” he said. “The best way to do that seems to be a rails-to-trails project.”

After seven years, the Hewletts are hopeful and optimistic that the rails-to-trails project will move forward this time around.

“Everyone we talk to, everyone in our bike club, and our friends in the local Kiwanis Club, they all say that this is something we need,” Tom Hewlett said. “So there’s no question at all that we need to do something to fix it. We can’t just say ‘Oh it’s bad’ and walk away.”

Below: Florida is home to numerous rails-to-trails projects, and this map shows a few of them in north and central Florida.

Haleigh is a reporter for WUFT News who can be reached by calling 352-392-6397 or emailing news@wuft.org.
Previous The Point, April 9, 2021: Four Major Hurricanes Forecast For 2021 Season
Next Putnam County School District Trudges Forward With Revitalization Plan; No Teachers Will Be Laid Off

GAINESVLLE, Fla. – Two new traffic lights are up along the westbound lanes of University …