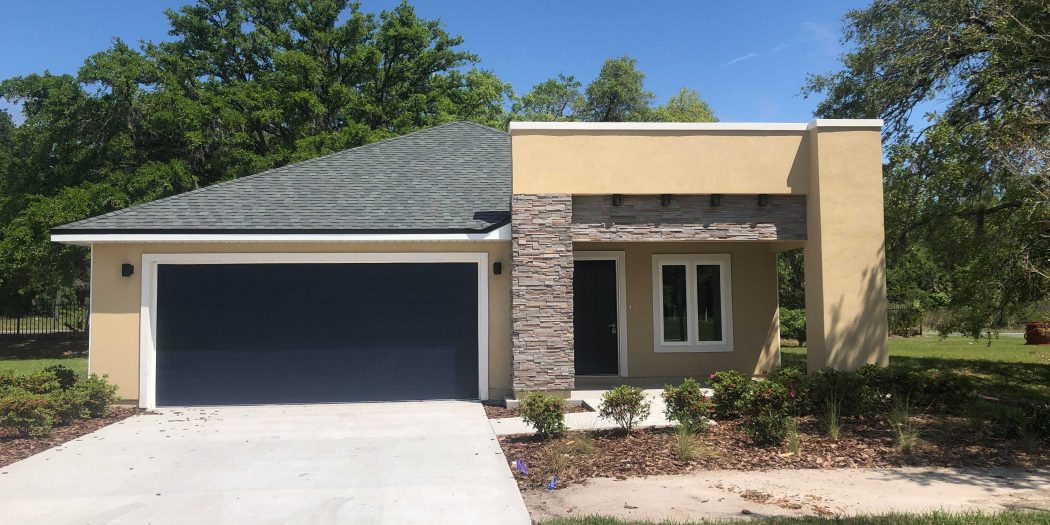 The first home in the Heartwood subdivision of east Gainesville was completed, breaking ground after 10 years of preparation.

David Arreola, a Gainesville city commissioner, said he’s really impressed with the amenities and quality of the home. Arreola, who has been a commissioner for four years, said he’s excited for the growth of this neighborhood because it’s one of the first new subdivisions built in east Gainesville in a long time.

“The city commission, even before my time, has long been putting resources and planning into this project,” he said. “And I’m just lucky enough to be here when it finally comes to fruition.” Arreola said this subdivision will be the first fully integrated mixed income community in Gainesville, and to introduce housing that’s affordable to a lot of people is a win-win.

“East Gainesville is the area of our city that needs the most attention, the most economic development,” he said.

Arreola said there are about 5,000 people on the waiting list for public housing assistance in Gainesville, and this community gives some of those people relief.

Daniel Gil, the project manager, said the Heartwood subdivision shows a lot of promise for what could be done in the east side of Gainesville. He said that since the Gainesville Community Reinvestment Area was tasked with redevelopment of this site in 2008, it has made milestones by creating community engagement, site planning, landscape designing, constructing site infrastructure, selecting the home builders and finally constructing the first home.

“Once we saw the first house go vertical, it really gave us that momentum for the next stages of Heartwood,” he said. The home, completed in mid-March, is one of 34 homes to be built in the neighborhood.

Gil said residents of this subdivision will receive instant equity when they move in. He said the CRA is working with the city of Gainesville’s Department of Housing and Community Development in a program called “Dreams to Reality.”

The program provides financing options for 11 of the 34 homes in the neighborhood, he said. Homes purchased through this program have the same quality as the remaining homes, but they give residents some relief in payments.

“The Dreams to Reality financing will bring down the monthly mortgage payments for those homeowners,” Gil said. “And with that, they will be getting instant home equity if they ever decide to move in the future.”

Carla Miles, who is part of a neighborhood empowerment agency called Greater Duval Neighborhood Association, said she disagrees with the Heartwood neighborhood being a fully integrated mixed income community. She said that a majority of the community will not be mixed income.

“The amount of affordable housing under a certain price range that is affordable to certain folk is only going to be a small percentage,” she said.

Above: Carla Miles, member of the Greater Duval Neighborhood Association, said she is concerned with the impact that the Heartwood subdivision will have on surrounding neighborhoods, like Lincoln Estates and Carver Gardens. (Charlene Medders/WUFT News)

Her biggest concern with the development of this neighborhood is the effect it will have on the surrounding communities, including Lincoln Estates and Carver Gardens. Miles said the city needs to be intentional about making it mixed use, and the residents in surrounding neighborhoods should also be served.

She said this area is replacing a low-income neighborhood, and she questions who the city is really building this neighborhood for.

“So, are they really building for the people who were displaced there? Hell no,” she said. “That’s my problem with Heartwood.” Miles said she hopes that as the city is building the other homes in the Heartwood subdivision, it’s also considering residents who still live in the area.

“If they’re going to be a mixed-use community, we should have all stakeholders at the table every time something is being built in that community,” she said.

Miles said if residents really had equity, 17 of the 34 homes in the neighborhood would have financing options, not 11. She said she thinks this is a good project, but not for this part of the community.

“If they want to share the community with us, then they should come in our communities with some respect as to what we need and want as well,” she said.

Sarah Vidal, the director of GCRA, said over the last 10 years, the city commission has changed, the city priorities have changed, and the GCRA changed.

She said there have been many community engagement workshops to give community members the opportunity to help with this project, and the city took the surrounding neighborhoods into consideration while planning this project.

“A lot of work went into the community to make sure that we thought about the future and how these neighborhoods might interact,” she said.

Vidal said she knows there is some frustration with affordable housing and the lack thereof in Gainesville, and she thinks this is a symbolic project that is sensitive and important to the community.

Arreola said the city has been interacting with community members over the years, and nobody is going to be pushed out of the surrounding neighborhoods.

“No one’s going to get pushed out of their home,” he said. “That’s not a correct narrative.”

He said the entire project has been well thought out, and the city has put a lot of effort into having a variety of prices for the homes so that people with a variety of income can move in to the neighborhood.

“I think at the end of the day when people see the final product, people are going to be happy with it,” Arreola said.

Gil said he knows this first home was in the works for a while, and he is hoping to break ground soon with the remainder of the homes.

“There’s a ton of moving pieces with this project, and sometimes things fall off and we get delayed,” he said.

He said a move-in date for residents is a moving target, but he hopes people can start to move in by the beginning of next year. Gil said people can apply to be a resident in the subdivision by filling out the contact box at the bottom of the subdivision’s website. He said there are currently 1,000 or more people on the waiting list.

Charlene is a reporter for WUFT News who can be reached by calling 352-392-6397 or emailing news@wuft.org.
Previous Bradford County Jail Inmates Begin Receiving COVID-19 Vaccines
Next A Florida Bill Could Make Reporting A Sexual Assault Safer For Survivors