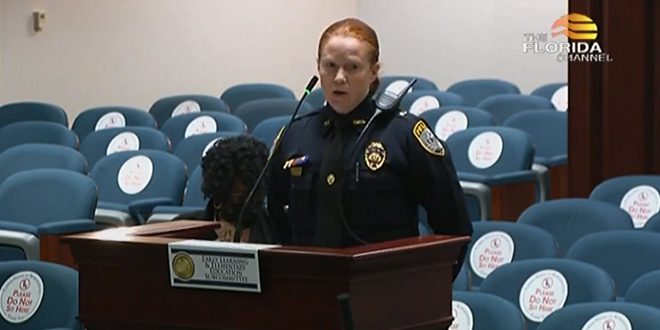 Editor’s note: This story contains descriptions of sexual trauma. If you or someone you know is a sexual assault survivor, you can use this tool to find your local crisis center for additional support.

The number itself is striking, and may even be a conservative estimate.

“One in six women in the state of Florida have been or will be raped in their life,” state Rep. Randy Fine said earlier this month as he presented legislation that – while it might not improve that number – could help the process for reporting sexual assaults.

The larger problem is that only one in three women feels the ability to go forward and report a rape to law enforcement, Fine said. His HB 1189 is intended to help resolve the issue by making a number of changes to the sexual assault response teams’ statute in Florida. The bill creates four key changes to current policies.

A Gainesville Police Department lieutenant, Rebecca McKenzie, shared her support for the bill during the April 1 hearing in the Florida House.

She’s been an officer in Gainesville since January 2004 and is currently a patrol shift commander. For a large part of her career, she’s been assigned to sexual assault investigations. As a police officer, though, she said she has not always been trauma informed.

Her journey began in November 2013, when she made a worrisome observation. Many of the survivors of sexual violence who had the courage to come forward and initially report to their agents became disengaged during the investigation and were either reluctant to continue or completely refused further participation when their detectives reached out to them.

“I knew that the Gainesville Police Department was committed to hold offenders accountable… But it was this thought that I realized that we needed to do something different with our approach,” McKenzie said, “and I started researching.”

During her research, she came across a trauma-informed sexual assault class that was hosted and given by the Florida Council Against Sexual Violence. She attended this course and it shifted her entire perspective; she immediately began to change the way her squad conducted investigations and interacted with survivors.

“It also showed me that not only did our entire agency needed to be trauma informed but our entire community,” she said.

McKenzie said she learned that the neurobiology of trauma affects memory recall in victim’s behavior and many of the signs of deception that she was taught, and many officers were taught early in their careers are actually indicators of trauma. Understanding the signs of trauma is imperative so that their officers respond appropriately.

Additionally, during this training officers were taught the importance of the first interaction with the survivor. The initial interaction usually sets the tone and if the officer does not respond with empathy and with an attempt to build a caring connection the survivor may not feel supported enough to continue with the investigation.

“I can only imagine how difficult it must be to report sexual violence to a stranger,” McKenzie said. “Regardless of how a survivor reaches out, when they reach out, where they reach out or to who they reach out, the response should always be the same, trauma informed.”

Katrina Duesterhaus also gave testimony as a proponent of the bill. She is a survivor of sexual assault and shared her story in front of the committee.

Duesterhaus said she was raped at a party she had gone to with two of her closest girlfriends when she was 14 years old. At some point during the night she was sitting in a bedroom surrounded by a group of five older guys, they were 18 and 19 years old. She didn’t understand what they meant when they started discussing who gets to go first  or what it meant when they began arguing over who would get sloppy seconds and she still didn’t understand what was going on when all of them left the room except for one of them.

“It was only then when he dropped his pants and came onto me to tear off my clothing, then I finally realized they meant to rape me,” Duesterhaus said.

She shares how she tried to get the first guy off of her, but there were four of his friends waiting at the door and she eventually just gave up.

It took her four years to report the assault. That experience, too, was traumatic for her.

“I felt like the officers who I reported to didn’t believe me, I felt like they didn’t even want to take my report, I felt less safe than before I had tried to report the five men who conspired to rape the 14-year-old girl,” Duesterhaus said.

None of the lawmakers questioned the need or specifics for the bill, signaling unanimous support as it made its way toward a full House hearing.

In his closing statement, Fine said, “There is a special place in hell for men who do this sort of thing.”

While the conversation in the Legislature was largely centered on the rape of women by men, the statistics come from a survey that defines rape as forced penetration or attempted forced penetration. The same survey found that 41.8% of women in Florida have been victimized by sexual violence outside that definition of rape.

And sexual violence doesn’t only affect women, nor is it perpetrated only by men. The survey found 20.4% of Floridian men have been victimized by sexual violence other than rape.

The bill passed the committee unanimously.

Camila is a reporter for WUFT News who can be reached by calling 352-392-6397 or emailing news@wuft.org.
Previous After 10 Years, Gainesville’s Heartwood Subdivision Completes First Home
Next The Lede ✓ || Season I Episode III: Add Some Spring in Your Life