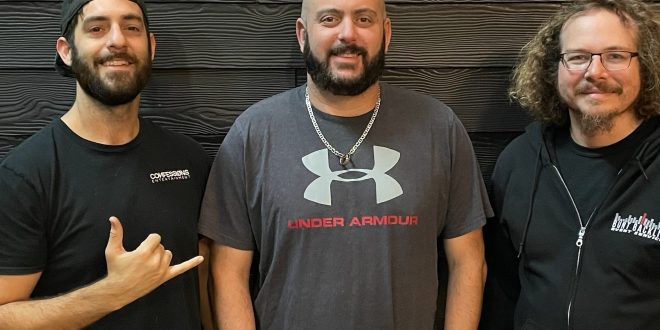 (from left to right) John “Pop” Pop, JD Chester and Eric Lenasbunt co-own Vivid Sky Vertical together, along with owning their own separate companies. The three also own Knockin’ Boots Saloon, a western-themed nightclub, with multiple other people. (Courtesy of John Pop)

You casually stroll across your hotel room, exit out onto the balcony and gaze down at the concert stage. You feel the subwoofers vibrate against your surroundings as you get hit with a wall of sound.

The music performer animates the stage with a lively production. Lasers light up the side of the building where you stand, creating a visual experience to accompany the boisterous music.

“All of these are positive aspects that have staying power after COVID,” said John Papoulis, who goes by “Pop” and owns Vivid Sky companies.

Vivid Sky Vertical is a Gainesville-based promotional group committed to creating concert experiences and celebrating music. Along with branching out into other cities, the company aims to bring events to Gainesville.

Partnered with Elysian Events Presents, the company will host top-selling musician Diplo on Friday. The concert will last from 7 p.m. to midnight at Vivid Sky Warehouse located at 2386 NE 18th Terrace in Gainesville.

Diplo’s team had contacted the owner of Elysian Events Presents, Jack Forney, to set up a show in Florida. Forney, however, did not have an available space to host an event. Not wanting to turn down the major artist, he reached out to Vivid Sky Vertical to partner on the production side.

“I was like, ‘Yeah, let’s do it,” Pop said. “Let’s do it at my warehouse. Let’s get the production company. Let’s go full force with this.”

Vivid Sky Warehouse can hold over 3,000 guests, though the amount of people in attendance at the Diplo concert will have a capacity limit because of the pandemic. Forney was unable to comment on other safety measures for the event.

The company obtained a liquor and catering license and has kept in constant communication with the Gainesville Police Department and Gainesville Fire Rescue, Pop said. The warehouse also resides in an industrial location, so the concert will not go against noise ordinances.

The site map for the event includes a stage, bars, VIP risers and more. The production company worked diligently to transform the space into a captivating venue with lights, seating, sound and special effects, Pop said.

“You’ll kind of get transported to the festival space again that everyone is missing,” Pop said.

Together, they organized the first vertical concert in the United States: House in the Hotel. Patrons booked a night’s stay at Fort Lauderdale’s Bahia Mar Hotel and enjoyed an electronic dance music show from the comfort of their hotel balcony.

House in the Hotel hosted multiple electronic dance music artists and had patrons in 60 rooms of the hotel in October 2020. Seeing the event’s success, Vivid Sky Vertical took another leap.

“Even though we were killing it before, if Covid never happened, we would never have these alliances,” Pop said. “With the three of us, the synergy together is incredible, and we’re building things we never could have done.”

Inspired by a European rock concert, the secret behind the shows is what the company calls “the scorpion array.” The team’s design carefully angles speakers to hit every level of a hotel with high quality sound. No matter what floor guests stay on, they will hear the concert as if they stood right in front of the stage.

A TikTok video of the first concert went viral, garnering thousands of views. People enjoyed the private hotel space and the lack of commute. Soon, agents from all over the country messaged Vivid Sky Vertical to congratulate them and ask how they pulled off such a feat.

“That really slingshot Vivid Vertical past what we really should be in in such a short amount of time,” Pop said.

Before Vivid Sky Vertical came Vivid Sky Studio and Vivid Sky Productions, both owned by Pop. Born and raised in Florida, Pop always had a passion for music, production and promotion.

Pop played bass for the band Morning Fatty since forming in 2003. After Pop graduated UF with a bachelor’s in advertising and a minor in business, the band started touring heavily in 2012.

The group traveled 42 different U.S. states in eight national tours, as well as doing two Virgin Island tours. After a certain point, the members wanted to move on to the next point of their lives and decided to dismantle the band.

“[Touring] was a blast, I wouldn’t take it away for the world,” Pop said. “But after a certain point the touring life kind of lost its luster.”

Everyman Sound Company had serviced Gainesville and the surrounding areas for about 36 years, and the owner decided to sell the company to retire. Vivid Sky Productions received all the company’s clients, equipment and warehouse space with the purchase.

Andrew “Drew” White, the lead singer from Morning Fatty, had worked for Everyman Sound Company; now he serves as the lead technician for Vivid Sky Productions. Some other employees also migrated over.

Pop’ stepfather Scott Sibbitt taught in Orlando for 26 years, but he moved up to Gainesville with Pop’ mom to work full time as the company’s lead repair technician. Known as “the GOAT,” he can fix anything, Pop said.

“Couldn’t find time in the day for anything but work,” Pop said. “Then, of course, March hit.”

Vivid Sky Productions offers equipment rentals, repairs, and production services that include lighting, audio and installation. Once they bought Everyman Sound Company, they became swamped with work, covering 25 to 30 contracts a week.

The company can service events ranging from 100 people to full-size stadiums and arenas. They provided production to the Florida Farm Bureau, local churches and local bars and clubs, such as White Buffalo and The Range.

One major contract was the Tory Lanez concert at the UF Exactech Arena in February 2020. They did the full production of that event from the setup of the stage to the installation of lights and speakers.

Vivid Sky Productions does a full-service production setup for the Tory Lanez concert at the Exactech Arena on Feb. 24, 2020. This was one of the company’s biggest contracts before the pandemic hit. (Courtesy of John Pop)

But once the COVID-19 virus started spreading, business declined. The company gradually lost all its work and contracts.

“The positive was we had time to really sink our teeth into things we needed to do,” Pop said. “When I bought the company, we hit the ground running.”

The lull in business gave the company the opportunity to handle a lot of the backhand work. They created a website, set up credit card payments and logged all equipment in the inventory.

Also from the pandemic, came the creation of Vivid Sky Vertical. Pop had reached out to his competitor, Eric Lenasbunt, at the start of shutdowns, and the two bonded over the lost business. Shortly after, they merged on the promotions side, bringing on JD Chester who also wanted in on the great idea.

Right now, the company awaits the city’s response for hosting larger events and having more frequent events. Though Pop cannot say which artists the team is in conversation with, he assures that people definitely heard of them.

“Back in the day the city really did have an awesome music scene,” Pop said. “We are dead set on changing peoples’ opinions about Gainesville.”

Alexa is a reporter for WUFT News who can be reached by calling 352-392-6397 or emailing news@wuft.org.
Previous High Schools In North Central Florida Proceed With Prom And Graduation
Next Florida Senate Scales Back Prison Closure Plan