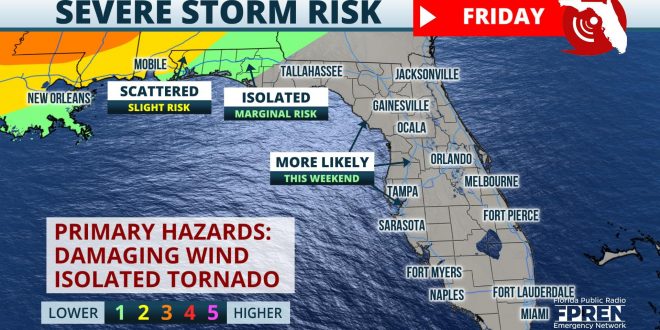 Stormy Weekend Ahead For Parts Of The Sunshine State

The dry, tranquil stretch of weather that the Sunshine State is known for in April is likely to come to an end this weekend. Some may even experience strong thunderstorms as part of a pattern change.

The first of several rounds of showers and thunderstorms is affecting the western Florida Panhandle Thursday morning. Most of the dangerous weather has been offshore, but a few gusty thunderstorms are still possible Thursday afternoon from the Apalachicola River westward to near Destin and Panama City.

Scattered thunderstorms are likely again over the Panhandle on Friday morning through the mid-afternoon. The storms that develop will have space between them, but neighborhoods that get underneath the strongest storms may experience strong, damaging winds and large hail. An isolated tornado or two is also possible. The highest chance of widespread rain and strong thunderstorms will come late Friday night into Saturday. A surge of warm, humid air from the Gulf ahead of a stronger upper air disturbance is expected to fuel a large cluster of storms. Damaging wind gusts and large hail are possible in the western Florida Panhandle, including the Pensacola, Destin, Fort Walton, and Crestview areas during the early and mid-morning hours of Saturday. These storms are expected to move eastward into the Tallahassee area and Florida’s Big Bend Saturday afternoon and could continue into North-Central Florida and the Nature Coast Saturday evening. It is unclear how unstable the air mass will be along the east coast of Florida, but model data as of Thursday morning suggest the storms may not be as strong from the Jacksonville area to Daytona. Residents there are encouraged to follow forecasts for likely changes this weekend, however. Areas from Tampa to the Orlando metro areas and southward into South Florida will have a higher chance of storms late Saturday night into Sunday. These storms may also carry a risk of damaging wind gusts, isolated tornadoes, heavy rain, and frequent lightning. Abnormally dry conditions, including pockets of moderate drought, have developed in these areas. Rainfall amounts of one-half inch to as much as 2 inches are possible in some of the heaviest storms, which could slow the drought development in some areas.

Dry conditions will persist across most of the state over the next couple of days. Latest drought monitor is showing some minimal drought conditions for portions of the Florida Peninsula. Slightly drier conditions (moderate) for areas near #WestPalmBeach and the #Everglades.#flwx pic.twitter.com/W2zivGWanI— Florida Storms (@FloridaStorms) April 5, 2021

Ray is a meteorologist for the Florida Public Radio Emergency Network (FPREN).
Previous The Point, April 8, 2021: Why This Year Has Been So Deadly For Florida Manatees
Next United Way Of North Central Florida Launches Online Program To Help Children Learn To Read During The Pandemic