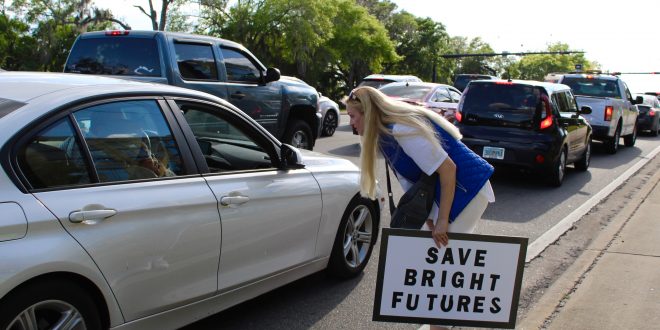 Nicole Howes, 53, speaks on Tuesday with local commuters who asked for more information about Senate Bill 86 after viewing her sign at West Newberry Road.(Jessica Torrente/WUFT News)

Blaring car horns and frenzied cheers erupted this week on Gainesville’s streets and sidewalks in protest of Senate Bill 86, even as the controversial bill progressed to the Florida Senate floor Wednesday for its second reading.

Authored by state Sen. Dennis Baxley, R-Ocala, the bill revises the eligibility for students to receive the Florida Bright Futures scholarships by establishing a financial award based on the amount specified by the General Appropriations Act. This way, public revenue provided entirely by the Florida Lottery could be used to fund other government expenditures instead of guaranteeing a 100% or 75% college scholarship to students who meet the existing requirements.

“This is not a contract or an insurance policy or anything like that. It’s a program that we do to encourage people to have a successful life and a bright future,” Baxley said during the legislative session. “It’s not a very bright future if you can’t get a career going with the degree you have.”

Passionate about retaining the college scholarships, Nicole Howes led two peaceful community rallies against the bill on public sidewalks Tuesday afternoon near West Newberry Road and Wednesday morning near the intersection of University Avenue and 13th Street. The 53-year-old mother of two emphasized the importance of creating public awareness for the bill before it hit the senate floor, where public comment would no longer be an option.

“This is really our last opportunity to make our voices heard,” Howes said.

The bill passed the Senate Appropriations Committee on March 31, an event Howes said attracted little awareness and gave her a short period of time to organize a rally given the holiday weekend that immediately followed. Despite encouraging local community members on Facebook to peacefully challenge the bill on Monday, Howes was joined by only four other people on Tuesday.

“Most people are unaware that this is happening, and those that are aware are getting a lot of mixed information,” Howes said. “I think it truly affects all of us. I think that what will happen is we will start losing our brightest students.”

In addition to SB 86, Howes voiced her concerns about Senate Bill 1728. Also authored by Baxley, the bill would require state universities to waive the out-of-state fee for nonresident college students who meet certain requirements and have a grandparent residing in the state.

“That will not only potentially displace our students, but cause universities and colleges to lose huge amounts of revenue,” Howes said. “If you have all of these out of state students pouring in, our students are going to be pushed right out.”

Listen below: Howes, a retired lawyer, is a homeschool mother who started researching and following up with the state Senate after learning about the bill’s inception. “We live in an academic area, so we’re surrounded by academic parents. I don’t know where the information began, but once it began, parents started talking and posts started coming up,” she said. (Jessica Torrente/WUFT News)

Jennifer Paugh-Miller led an additional rally against SB 86 Tuesday afternoon on the sidewalk near Target on Archer Road. The 48-year-old mother of two said the bill would not only impact her own children in high school, but also hurt current — the bill incorporates no grandfather clause — and future college students who don’t secure a scholarship from their universities.

“I feel committed to coming out here… because of all the other students it affects throughout the state, especially the underprivileged ones that all they have to do is do well in school, and this is there for them,” Paugh-Miller said. “If they take that away, they certainly hurt those underprivileged folks just as much as they hurt mine, and I think that’s wrong.”

Though a number of college students have already benefited from Bright Futures scholarships, many high school students have yet to enter college knowing this type of financial aid is guaranteed.

One of those students is Salem Ridlon.

The 16-year-old sophomore at Buchholz High School in Gainesville attended the rally on Tuesday with her mother, Miller-Ridlon. Ridlon said she’s been relying on the Bright Futures scholarship for as long as she can remember.

“By eliminating it or making it so that it’s not as easily a to be able to pay for college or not, and then with this added onto it, it can be pretty detrimental,” Ridlon said.

Ridlon works a part-time job, takes an Advanced Placement course and plays several instruments for her school’s band. Despite her multiple responsibilities, Ridlon said she is still working to pursue the scholarship.

“I’m hoping that if I get Bright Futures, it can still pay for some of my university tuition,” she said.

SB 86 is now placed on calendar for its third and final procedural reading, where the full state Senate will vote on the bill before it reaches the House. Dates for those final readings have yet to be announced.

Jessica is a reporter for WUFT News who can be reached by calling 352-392-6397 or emailing news@wuft.org.
Previous Alachua County School Board Begins Discussions About Difficult Budget Year
Next The Point, April 8, 2021: Why This Year Has Been So Deadly For Florida Manatees