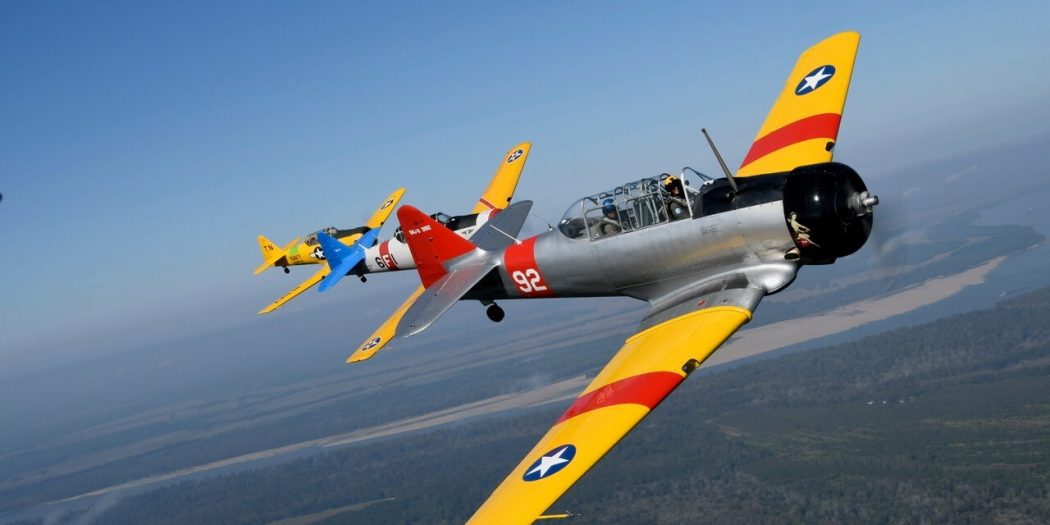 A group of North American T-6s cut through the air in a left echelon formation. “The whole reason for getting together in these clinics is so that we can hone our skills, do it professionally and improve ourselves,” Larry Lumpkin, 67, said. (Photo courtesy of Larry Lumpkin)

For many people, flying is a means of transportation to get from point A to point B while seated uncomfortably alongside strangers encroaching on their personal space.

But for Jon “Mojo” Rising, 57, and others like him, flying is a gateway into the past. While high above in his World War II-era aircraft, he imagines the histories of those who flew it before him. How it must have been when pilots were trained to fly faster than Americans ever had.

“To be a part of that movement would have been quite something,” said Rising, of Ocala.

He will get to dust off his formation skills at the Gainesville Formation Clinic that the North American Trainer Association is set to hold Thursday through Monday at the Gainesville Regional Airport. The association’s president, Larry “Lumpy” Lumpkin, 67, of Omaha, Nebraska, expects about 50 members to participate in the Gainesville clinic with about 40 airplanes as well.

The association is part of a larger group called the Formation and Safety Team, which focuses on educating individuals about flying in vintage military and civilian aircraft.

Lumpkin said the clinic is highly structured to ensure safety when flying. The first three days of the clinic are training days, during which the pilots ensure they are comfortable with their aircraft and can fly safely.

New members undergo a one-on-one evaluation flight to know they can take off smoothly, stay to one side of the runway, and keep their visibility forward, Lumpkin said.

The idea behind the clinics is for new members to qualify in formation flying and for returning members to requalify. In order to do this, pilots must fly in a four-ship formation and have a leader observe and sign off that they are sufficient and skilled enough to fly in formations outside of the clinic, Lumpkin said.

“Gainesville is going to be a huge clinic; it’s one of our largest that we’ve had in quite some time,” he said. “Coming back on the backside of COVID has a lot to do with that, people are anxious to get out and go.”

Due to the pandemic, the association had to cancel many of its larger events last year, such as the Oshkosh clinic in Iowa and the Sun and Fun clinic in Lakeland. However, by September or so, it was able to start hosting clinics across the country again.

“Bottom line is, the first half of the year nothing was done,” Lumpkin said. “So what a lot of us did is got together personally with other members and put on our own fly-ins and got our formation currency that way.”

Since the association holds clinics in different states, it has been abiding by state coronavirus guidelines, Lumpkin said. Thus, for the Gainesville clinic, members attending will abide by Florida guidelines, such as avoiding close-contact settings, washing hands, and social distancing.

Chuck “Marshmallow” Marshall, 76, the secretary-treasurer of the association, who splits his time between Elkhart, Indiana; Beaver Island, Michigan; and Ocala, said many members are excited about going to the clinic.

“With COVID being what it was last year, there’s a lot of people who didn’t fly as much as they used to fly,” Marshall said. “So we’ll have guys there that are seeking proficiency, to get the dust knocked off, and camaraderie with other like-minded people.”

Marshall said flying for him is insatiable. He can’t imagine his life without it.

“It’s been such a rich part of my life that I’ve been willing to sacrifice for it,” he said. “I’ve been successful in life, so it’s allowed me to fly different equipment, and have the kind of joy that it can bring.”

Marshall found success in life from his 35-year career as a certified public account. In his life as a pilot though, he has become a mentor and trainer, passing his knowledge on to others.

“A lot of the flying joy is in helping other people achieve the same level of proficiency and skills we have,” he said. “That goes to the heart of the trainer, of which some of us are, and we’re dedicated to seeing that the skill set continues.”

Marshall got his start flying after being drafted for the Vietnam War, and serving in the Air Force at Ellsworth Air Force Base in Rapid City, South Dakota. He was a missile mechanic but learned to fly in the aero clubs and got involved with the North American Trainer Association 22 years ago after seeing others flying in formation.

Rising did not have military experience. He said he tried to join the Navy in the early 1980s but was turned away because he wore glasses. However, his experience with NATA for the past 11 years has given him a sense of camaraderie and a semblance of military experience, he said.

“It’s probably as close as I’ll ever get to some semblance of military experience because of course the military they do a lot of their flying in formations,” Rising said. “And we brief the whole formation and what each pilots’ responsibility is, and then go out and do it all the way.”

Another member, Walt “Footloose” Fricke, 72, served in Vietnam as a combat pilot with the 68th Assault Helicopter Company. During his deployment, a missile blew up next to his cockpit while flying and he was sent home after nearly losing his foot.

That did not keep Fricke out of the cockpit though. After flying for 60 years, Fricke said that he particularly enjoys flying World War II-era planes because he grew up admiring them. He now splits his time between Minnesota and Florida, flying in both regions when he can.

When Fricke isn’t flying historical aircraft, he runs the Veterans Airlift Command, a group formed to transport combat-wounded veterans and bring them and their family together. He said he flies for veterans and when flying World War II aircraft, he feels there is a more personal connection to their history.

“You get in the airplane and you realize that somebody’s feet who were on these pedals went and flew in combat,” he said. “They maybe gave their life for their country flying in combat in the Pacific or in Europe.”

Rising said he hopes that when people see the planes in formation, they will also connect with the importance and history of these planes.

“And when they see them flying around out there in formation, they’ll understand what we’re doing and that we’re doing it in the interest of safety.”

Trey is a reporter for WUFT News who can be reached by calling 352-392-6397 or emailing news@wuft.org.
Previous The Point, April 7, 2021: Ocala Community Rallies Around Effort To Help Young Boy Take His First Steps
Next Florida Blueberries Ripen For The Season After A Marathon Pandemic Year