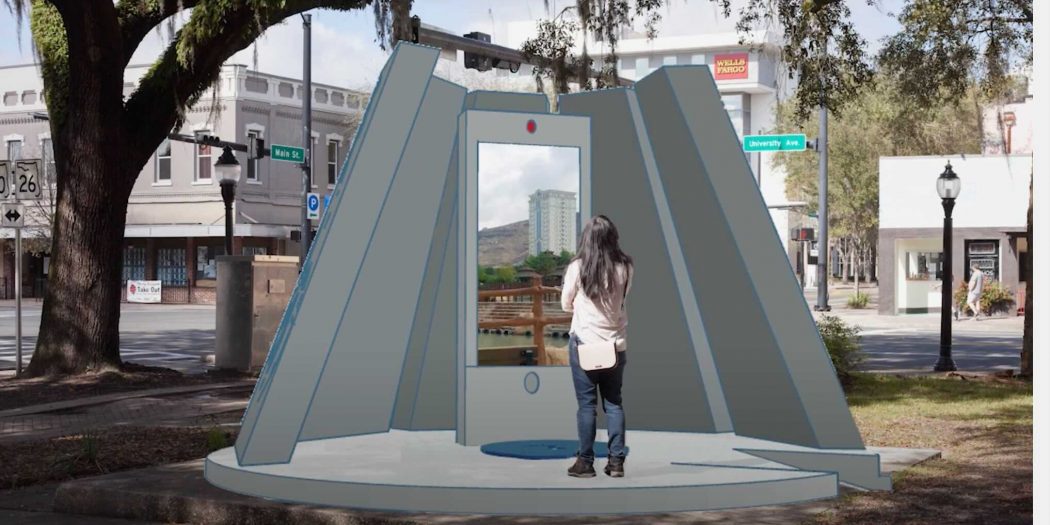 This virtual rendering shows where a sculpture designed by Gainesville and Duhok students could potentially stand in the city's central downtown intersection. (Image courtesy of Terrence Ho)

When students from Duhok, Kurdistan, Iraq, and students from P.K. Yonge in Gainesville met on Zoom, they were separated by an ocean.

They found, however, that they share a common interest: They are all fans of the Argentinian soccer player Lionel Messi.

Gainesville Mayor Lauren Poe and Ali Tatar, the governor of Duhok, renewed an agreement of mutual friendship and collaboration between the public and private sectors in both cities in March.

Ho said the students, ranging in age from 12 to 18, collaborated and designed a sculpture featuring a world map with Gainesville’s sister cities identified as well as a ‘window’ which would provide a view of Duhok.

In one of their first Zoom calls in September 2020, Gainesville and Duhok students got to know each other and also found themselves connecting on topics like food and sports.

“My preconception was that they would be interested in each other’s foreignness,” Ho said. “They didn’t even think about that.”

Ho said he was impressed by the students’ ability to lean into their curiosity and ask each other questions about their cultures.

One of the Gainesville students who helped develop the idea for the sculpture, Adriana Sanchez, 12, said she really enjoyed being able to meet students from another country.

“We got to talk and get to know more about each other, it was a really fun experience,” Sanchez said.

Shan Al-Sayed, a 16-year-old student from Duhok, spoke at the March 8 signing of the sister city agreement and expressed her excitement for the program.

“We’ve spent a lot of time discussing our daily lives with the students from Gainesville and our differences and similarities,” Al-Sayed said. “Hopefully, this partnership fosters mutual understanding of both cities’ cultures and traditions.”

Al-Sayed will be coming to America on an exchange program this summer.

Ho entered the sculpture in a competition as Alachua County searches for a piece of artwork to replace a Confederate statue that was previously in the center of Gainesville – at the west lawn of the Alachua County Administration Building at the intersection of Main Street and University Avenue.

Later this week, Ho expects to hear whether or not the sculpture is one of the finalists. But even if it isn’t, he hopes to see it find a home somewhere in Gainesville. The sister city pavilion across the street is another potential option.

“I’m really proud of the students’ work and the sculpture that was designed,” Ho said. The ultimate hope is that if it doesn’t end up as a finalist for that location, it can still be placed somewhere else.”

Sarah is a reporter for WUFT News who can be reached by calling 352-392-6397 or emailing news@wuft.org.
Previous ‘The World Isn’t Against You:’ Gainesville Community Playhouse Returns To Musicals With ‘Fun Home’
Next The Lede || Season III Episode XI: Planning for Improvement