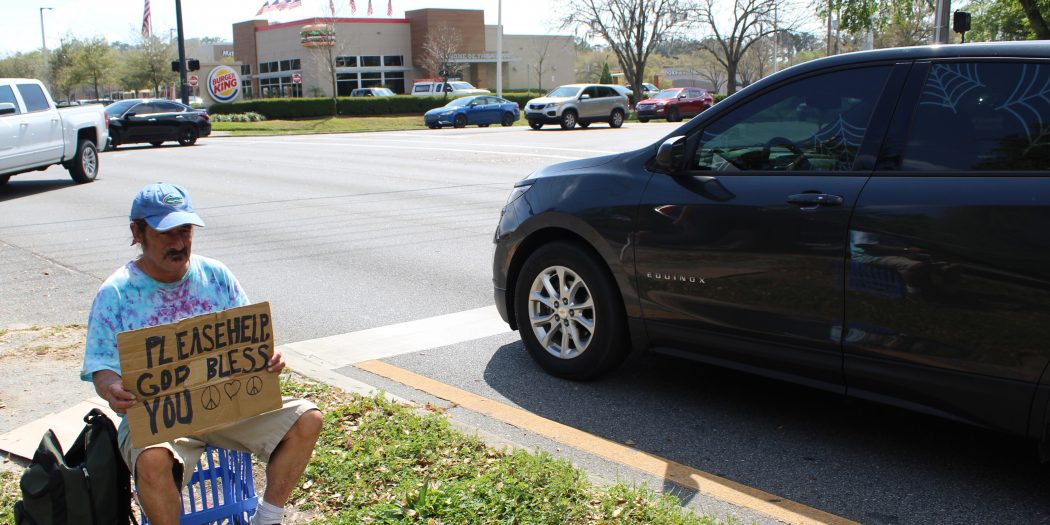 Ramine Dehgan panhandles at Northwest 62nd street and State Road 26 by The Oaks Mall in Gainesville. The grassy median there is more than 6 feet wide, so he can occupy it despite the new ordinance. (Lillian Lawson/WUFT News)

For many people struggling with homelessness or income instability, panhandling on a street median is a way of life, but a new Gainesville ordinance is changing this.

While city and police officials insist the ordinance is not targeting them, people who are homeless and their advocates say there’s no question who will be hurt the most.

“I’m living on the streets,” said Charles Smith, 35, who has been panhandling in the city for about a month, “and now you want to fine me because I’m out here trying to make a living?”

Smith said it’s so much easier for panhandlers if they can stand along a median as drivers waiting at a red light have time to think about giving spare change.

Another panhandler, Ramine Dehgan, 56, said the risks of standing on medians are quite real.

“I’m sitting right in the middle of the traffic, and there’s cars coming from behind me, and I can’t see that – I’m not looking behind me,” he said.

Dehgan, who recently found an apartment with the help of GRACE Marketplace, said he has been panhandling for three to four years, and most recently from a median near The Oaks Mall.

Another panhandler, Alan Wilson, 49, said the ordinance won’t affect him much, because he prefers to do it from a sidewalk where there is less risk. Referring to other panhandlers, Wilson said, “I’ve personally lost two brothers in my lifetime from drivers not paying attention.”

Carl Simms, 59, a military veteran living out of his car, said he is uncomfortable panhandling on medians and instead does so from his rollator at a shopping complex on Northwest 43rd Street.

“You gotta eat, sleep and breathe depending on public handout,” Simms said.

Standing in the median, however, is not worth the risk, nor is it the only type of place where it can be unsafe for panhandling, he said. Indeed, on separate occasions vehicles have hit the curb and a pole much too close to his normal position near the entryway of the complex.

“I didn’t feel safe, so I was very skittish about doing it,” Simms said.

The city commission adopted the ordinance in February, but police have been working to inform as many panhandlers as possible about the changes before issuing citations.

Its passage was sparked by an April 2019 incident in which David Washington was killed while panhandling at the intersection of Northwest 16th Boulevard and Northwest 43rd Street.

When enforcement starts, the first penalty will be a $50 fine. On the second infraction, a $100 fine will be imposed. On the third, the violator will be required to attend a civil court appearance.

Mark Watson, a homeless outreach advocate at Three Rivers Legal Services, which helps people who have little to no income, questioned the efficacy of imposing fines on people unable to pay them.

“If somebody is out there, and they don’t have money and they get fined $50, that might as well be a million dollars to them,” Watson said.

He and other homeless advocates also said the ordinance will inevitably mean more homeless residents will have unpaid civil fines on their public record, making it harder to find housing.

Patrick Dodds, director Continuum of Care, also known as the North Central Florida Alliance for the Homeless and Hungry, acknowledged that the city is in a tough spot.

“What they’re faced with,” Dodds said of city officials, “is an ongoing struggle to really balance both the desire to help this community, and the desire of our housed community to create an environment that makes them feel safer.”

City Commissioner Harvey Ward said there have been overwhelmingly positive responses from the community regarding this ordinance. Ward first proposed it in April 2019 after Washington’s death, and he said he spoke with homeless advocates to get their input while pursuing its passage.

“Anything that crosses my desk that has anything to do with homelessness or extreme poverty, that’s usually my first call is to GRACE Marketplace,” he said.

GRACE Executive Director Jon DeCarmine said he doesn’t have a stance on the ordinance and believes it to be “more or less benign since it’s not a ban on panhandling.”

Will it negatively affect the homeless? DeCarmine doesn’t think so.

“It’s very easy to conflate homelessness and panhandling, but the reality is that only about 5% of people without housing actively panhandle in the community,” he said. “The vast majority are busy working, or trying to get back into housing as quickly as possible.”

Ward also said he hopes police won’t have to issue many fines or citations, though if it helps to save lives, it will be worth it.

“Anyone standing in a median for an extended period of time is in danger,” Ward said. “I would love it if everybody drove well, but that’s not the case. That’s not the world we live in. I don’t want to get a call from the city manager that someone else has been run over and killed in a median.”

Below: Hear reporter Lillian Lawson explain what this story means for Gainesville and those who panhandle. Subscribe to The Point podcast on iTunes or Spotify.