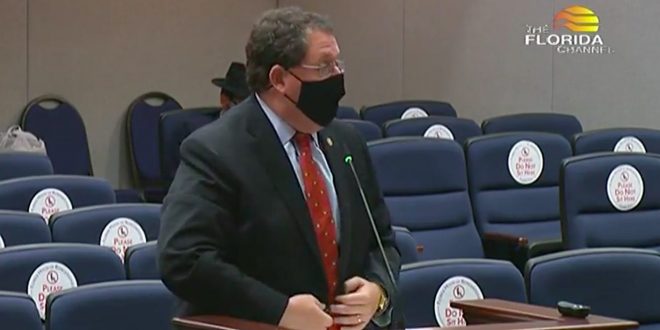 State Rep. Randy Fine advocates for his bill creating a moment of silence at a March 10 Florida house Committee meeting. (Courtesy of The Florida Channel)

A cell phone wasn’t there to keep her brain stimulated at all times – she could just look out her car window for a while and not feel a nagging urge to do something else. Children today, she said, are being overloaded with information, with no time to pause and enjoy a moment of peace.

Proposals moving through the Florida Legislature attempt to solve this problem.

HB 529, sponsored by Republican Rep. Randy Fine, would mandate a brief, one-to-two-minute moment of silence at the beginning of each school day. Teachers would be prohibited from influencing how the students spend the time.

Florida is currently one of 18 states that allow school districts the option of implementing a moment of silence at the beginning of the day.

The bill passed the House floor earlier this month roughly across party lines, with a vote of 94-24. The Senate version of the bill, SB 282, sponsored by Senator Dennis Baxley, passed unanimously through the Judiciary Committee on Monday. It now must clear the Senate Rules Committee before reaching the full chamber for a vote.

Even though Schirmer, who’s in her sixth year teaching at Howard Bishop Middle School in Gainesville, agrees that students need a moment of reprieve, she stands in opposition to the bill. She fears there may be an agenda behind it, and that it may be a step toward sneaking prayer back into public schools.

She’s not alone in these thoughts.

Devon Graham, an assistant state director for American Atheists, spoke out against the bill in a House Education & Employment Committee meeting on March 10. She said it was unnecessary to mandate the policy when districts can already vote to enforce it themselves.

Georgia is one of 14 states that requires a brief moment of silence, and a lawmaker there is attempting to sponsor a bill that would allow a student to lead members of the class in a Christian prayer. To Graham, passing this bill in Florida would be a gateway to more aggressively religious legislation in the future.

“It seems very innocuous, but it’s just, ‘What happens down the road?’” she said.

Fine doesn’t share these concerns. With each child having their own choice as to how they’ll spend their time, he said he doesn’t believe the bill prioritizes prayer. He went on to say the separation of church and state is a fictional construct created by radicals.

“I understand the anti-religion zealots will come up with any reason whatsoever to try to make our lives devoid of any meaning, but they’re wrong,” he said, “and this bill’s going to pass.”

Near the end of a recent class period, Schirmer gave an impromptu survey to her students about the idea of a moment of silence and what it would mean to them. The nine responses ranged from excited to lukewarm, with some reflecting on the calm it might bring and some not seeing much of a point to it at all.

Dialogue about the moment between students and teachers is essential to Schirmer. Without students, teachers, principals and parents all being on the same page, she thinks the policy could fall flat.

“In order to tell people to do something, you have to believe it,” she said.

While teachers can’t direct their students on how to spend their time, they are required to encourage parents to discuss the moment with their children, something of which Devon Graham said she’s skeptical.

“Most parents are going to be like, ‘I don’t know, think about your homework. Who cares?’” she said.

Graham pointed out the lack of guidelines toward how teachers who influence their students will be disciplined, and feared the moment could ostracize certain students who spend their time differently than their peers.

Fine said he doesn’t buy that bullying would become a consideration.

“Inherent in the word silence is that you don’t know what the other person is doing,” he said.

However, Graham pointed to a 1985 civil case in West Virginia as evidence of gray areas that could arise. In homeroom, at the beginning of a school day, an 11-year old student chose to spend his brief moment of silence reading a science fiction book.

A little later, in second period, two students asked him why he was reading a book and not praying. The student, who was Jewish, responded that he didn’t have to pray. The two Christian students told him if he prayed, he could be saved and make it to heaven instead of “going down with all the other Jews.”

Although she opposes the bill, Graham acknowledged the stress that kids are under, and said she would support mindfulness education in P.E. and health classes as a substitute. Fine said he’d also be in favor of these measures, and doesn’t view his bill as a fix-all solution.

“This is one step to help our kids navigate the world,” he said.

Ryan Bianchet, a world history teacher at Eastside High School in Gainesville, went to elementary school in Washington D.C., where every school day would begin with a moment of silence for those who had lost their lives for their country.

It was a daily moment of reverence, slotting in between the Pledge of Allegiance and the morning announcements. He saw value in that type of group routine then, and said he still sees the value of it today.

“I don’t think with it the students are going to spiritually enlighten, but I could definitely value the purpose of it,” he said.

Listen below: Eastside High School history teacher Ryan Bianchet discusses how he would communicate with parents about the moment of silence policy. (Thomas Holton/WUFT News)

WUFT · Ryan Bianchet on the moment of silence

Bianchet said concerns about where this bill could lead down the line should be addressed exactly then – down the line. He doesn’t think they should block Florida schools from moving toward a greater emphasis on self-reflection.

“We’ll never get there unless we start doing something like shutting up for a second at the beginning of the day,” he said.

Although he teaches history now, Bianchet has taught psychology as well. He and his students loved it, as it was one of the only times throughout the school day they got to talk about who they were as people. He said he sees a moment of silence as a small step toward helping students understand themselves more deeply.

Thomas is a reporter for WUFT News who can be reached by calling 352-392-6397 or emailing news@wuft.org.
Previous The Lede || Season III Episode X: Moving Forward and Learning from the Past
Next The Point, March 30, 2021: Coronavirus Case Numbers Move Back Up In Florida