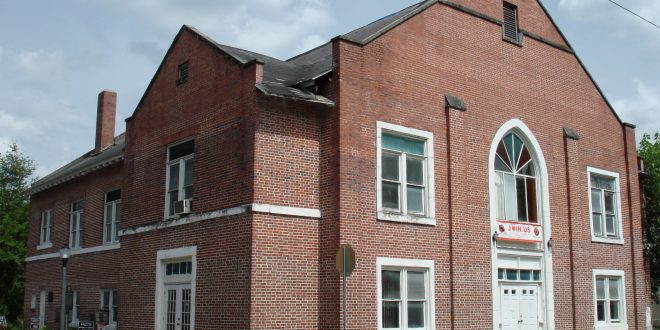 Before the UFHP intervened the church was suffering from termites and inactivity. (Photo courtesy of Sujin Kim)

Two Gainesville Churches Might Be Headed For Historic Preservation

The next step is approval from the U.S. National Park Service.

Marty Hylton, the director of the University of Florida’s Historic Preservation Program (UFHP), is certain they will get approved.

The addition of these churches to the register will provide more opportunities for grants and funding that will preserve their historic significance in Gainesville.

The nominations came from UFHP in an effort to support local landmarks that are at risk of destruction or closure.

Preservationists consider both churches to be important landmarks from the 1960s Civil Rights era.

UFHP staff has been working with Mt. Carmel Baptist Church since 2017 to preserve its historic significance. They launched a website in 2019 called “Save Old Mount Carmel” after the church fell into a heavy state of disrepair due to inactivity and termite infestation.

Hylton said that when they first began working with the church, the building had holes in the roof and was close to destruction.

“If we hadn’t intervened in that moment, the church wouldn’t be there,” Hylton said.

The church is located in the Pleasant Street Historic District, which itself was added to the National Register in 1989. But the church could not be put onto the list because it failed to qualify due to its age at the time. It was built in 1944, making it then just five years shy of the 50-year minimum for addition onto the Register.

During the 1950s and ’60s, the church served as a spiritual and social center for the African American community. Due to segregation in Gainesville at the time, many African Americans looked to the church as their means of expressing religious freedom.

Because of its large African American community, in the 1960s the church became a meeting area where non-violent protests and activities were planned for Alachua County. Thomas Wright was associated with the church from 1920 to 2014 and he organized sit-ins, picketing and peaceful marches in Gainesville during the civil rights era.

Wright played a central role in desegregating schools and became a community leader in Gainesville upon his arrival from St. Augustine.

To repair the church, the UFHP is working to obtain grants. Getting listed on the register is one step toward improvement.

While the register will not provide direct financial aid, it will open the door for opportunities to receive aid for struggling historic buildings.

For the Lutheran Church, going on the register will offer some protection from the increasing developments on University Avenue.

“Gainesville needs to wake up,” Hylton said. “We are going to lose a lot of history.”

Hylton expects both churches to be approved by the National Register of Historic Places within 15 to 30 days.

Natalie is a reporter for WUFT News who can be reached by calling 352-392-6397 or emailing news@wuft.org.
Previous The Point, March 25, 2021: How Proposed Changes To Florida’s Bright Futures Program Are Evolving
Next April 5: The Day All Floridians 18 And Older Can Get A COVID-19 Vaccine, DeSantis Says