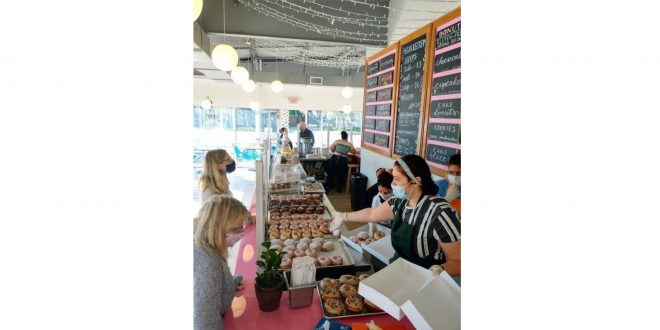 Jackie Kolosky navigated her way through a sea of majority male-run firms before starting her own business in 2017.

Being a female business owner doesn’t come without its own unique set of challenges, regardless of the industry or practice.

“Even while working in a feminine modality,” Kolosky said, “The patriarchy has a firm grip on all of us and has created the very structure for how a business is built,” Kolosky said.

In 1972, there were only 402,000 female-owned businesses in the U.S., according to the National Association of Women Business Owners. Today, over 12.3 million exist across the country, and Gainesville has its own significant community of female business owners.

The most recent U.S. census statistics from 2012 showed that 35.7% of Alachua County businesses are female-owned, up from 30.8% in 2007. Despite the nationwide “shecession” being observed in the last year, several female-owned firms in Alachua County continue to thrive under the circumstances, including Chase Morris’.

Morris braved the small business scene mid-pandemic, shortly after her mother and current business partner had to close her brick-and-mortar shop due to COVID-19.

Morris opened The Homebodi — an online “repurposer’s treasure trove,” in her own words — in August 2020.

“It was a scary time to start a business, and I’ll be honest, there are obstacles,” Morris said. “You have your zero-sales days and the days you pour your heart into a project and it doesn’t really get noticed, but we keep trekking on.”

Persevering despite challenging circumstances is a common thread among these female-run businesses.

Margaret Clow of Joyfully Baked, a vegan bakery and creamery, pursued her love of baking while parenting a 2-year-old and awaiting the arrival of her second child.

Joyfully Baked initially existed only as a vendor at local Alachua markets. At that time, Clow juggled being both a stay-at-home mom and a workplace mom.

According to U.S. Census data, mothers make up 32% of the female workforce, and Clow fought hard to remain a part of that group.

In January 2020, Clow opened her physical bakery on NW 8th Street to the public, opening the doors not only for new customers, but for new challenges as well.

“The biggest obstacle had been transitioning the way my personal home life had been set up for years as a stay-at-home-mom,” Clow said. “It’s still hard; many times, my kids don’t want me to leave.”

But rather than struggle alone, Clow hired a nearly all-female staff — many of them mothers themselves — to help watch over each other’s kids.

One baker has a 4-month-old daughter and brings both the babysitter and the baby when she comes into work, Clow said. Clow’s two-year-old son hangs around the bakery often, too.

Gainesville women-owned businesses such as these have been emerging over the last few years thanks to independent and focused efforts.

The University of Florida’s Division of Small Business & Vendor Diversity Relations is one major group spearheading efforts to increase the number of women-owned firms in Gainesville through their Women’s Business Initiatives.

In an interview with the Business Report of North Central Florida, SBVDR director Kathey Porter said she’s “more determined than ever to create a dynamic entrepreneurial community and support a local ecosystem for women entrepreneurs who are armed, ready and excited about doing business.”

Devotion, dignity, and a desire to uplift other female-run firms characterize these women entrepreneurs, and their efforts emanate throughout Gainesville.

“The women that have come before me and fought for equality have paved the way for more acceptance of women in business,” Kolosky said. “I bow to them.”

More women-owned businesses in Gainesville & beyond:

Ale is a reporter for WUFT News who can be reached by calling 352-392-6397 or emailing news@wuft.org.
Previous Gainesville Police Advisory Council Looking To Enact Change Despite Restrictions
Next The Point, March 23, 2021: ‘Watch It Happen’: Another University Avenue Development Is Rising In Gainesville