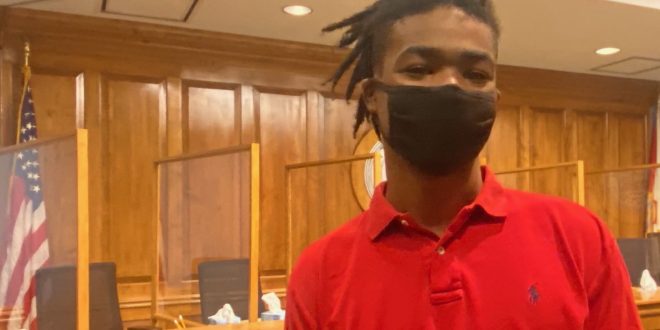 Keyon Young, 21, a hotel night auditor, said he wants his service on the Gainesville Police Advisory Council to also help address the causes of crime in the Black community. (Kalia Richardson/WUFT News)

Keyon Young came to his first meeting as a member of the Gainesville Police Advisory Council last month dressed, he said, like “a regular 21 year old.”

Sporting jeans, a Ralph Lauren polo shirt and a pair of Air Jordans, Young, a night auditor at a local hotel, said he did so to reduce the societal stigma associated with young Black men. He also pledged to use his position to address issues that lead to crime within his community.

“As a race, we don’t get respect,” Young said. “I’m trying to change that narrative.”

Young is one of several new board members of the reconstituted police advisory council. Seven of the 11 members identify as Black and four are women. Among them are a former city commissioner and a police officer. Their ages range from early 20s to 70s.

The council’s second meeting is Wednesday. Its new chair is Fareed Johnson, 28, a commercial driver who once served as an Air Force airman. He said he wants to keep the realities that many people of color experience when encountering police at the forefront of the council’s mission.

A veteran council member, Johnson said he wishes it could make recommendations to Gainesville Police Department officials about open cases, but that he knows that a Florida statute prohibits council members from accessing or formally assessing active investigations.

“Sometimes people fail to realize that the advisory boards are restricted in their powers,” he said.

The council uses a review-focused model in which its members can leave comments on closed investigations, but not open ones. The council can also review police procedures impacting communities of color, make police reform suggestions and help to promote crime prevention.

For the council to have true accountability it must have more authority, said Kali Blount, 64, a  community activist. Blount said he has attended council meetings for more than a decade – and seen otherwise hopeful residents lose their belief that it could achieve anything meaningful.

“They’re looking for an alternative to having the police investigate themselves,” Blount said.

He wants the council to have a more direct influence, including the power to hold hearings, issue subpoenas and make findings on investigative cases.

No two civilian police boards in the U.S. are alike. Each is shaped by the cultural, political and social tension that arise within that particular geographical area. That led the National Association of Civilian Oversight of Law Enforcement to adopt a classification system.

Among the nation’s top 50 largest cities, one-third use an investigative-focused model that analyzes complaints against police officers.

The Dallas Community Police Oversight Board can conduct its own investigation if dissatisfied with the findings of its local police department’s internal affairs division.

The San Francisco Department of Police Accountability has 35 civilian staff members who evaluate complaints of officer misconduct; that agency can require officers to appear before them as well as determine whether to file charges with the city police commission.

The makeup of police review boards also differ nationwide. The Houston Police Department has a council comprised of high school students to discuss issues such as illegal drug use and teen dating violence. In Fort Worth, Texas, six ministers serve on a 40-person review board. Phoenix has 12 review boards divided by characteristics such as race, gender, ability and religion.

Johnson said no one should think the Gainesville advisory council has not held GPD to account.

The council called for the use of body worn cameras in a 2014 report and 269 cameras are now in use. GPD also now lets people without a bachelor’s degree apply to become police officers.

After local protests fueled by police misconduct and use of force policies last summer, the advisory council began reporting directly to the city commission, rather than the city manager.

Ernest Walker, a 42-year-old fast food employee, spent more than 12 years behind bars before he became a member of the Gainesville advisory council. Walker said it’s important that the public acknowledges that many police officers still stereotype against Black men.

“When you haven’t been where I’ve been at, it’s easy to be neutral,” he said. “It’s easy to say that the cops don’t harass you, because you’re not standing at the corner store.”

Walker said he began selling marijuana and other drugs in 1993 and developed a drug addiction in 2012. He wants to see more mental health programs and drug rehabilitation centers opened.

“Locking people up and throwing away the key, that’s not the answer, because all you’re doing is creating a monster,” he said.

Andrew Miles, the executive director for the Greater Duval Neighborhood Association, said he joined the local advisory council to bridge the gap between the police and children.

Miles, 63, has lived in Duval, or what he calls “Out East,” all his life and has had good and bad experiences with officers, he said.

“Some of them have, in my opinion, came up with the idea that they’re there to bully and to observe, instead of protect and serve,” Miles said.

Although the advisory council can only make suggestions, Miles said he hopes that the recommendations translate into procedural changes in policing.

Jeanna Mastrodicasa, 50, was appointed to the advisory council in 2013. The associate vice president of the University of Florida Institute of Food and Agricultural Sciences, she is the council’s vice chair, and led the public safety committee while serving on the city commission.

Mastrodicasa said she worries about college students attending bars and nightclubs in Midtown and downtown, and whether they will drive home safely or abide by COVID-19 safety measures.

“Policing is a whole lot more than just reacting to a crime call,” she said. “It’s really trying to prevent, be present and solve problems for the community.”

City Commissioner Harvey Ward said he wanted the voice of young Black men on the new advisory council and is pleased with the board’s diversity.

“They don’t all look like me,” Ward said. “And that’s a really positive thing.”

Young said Black people are arrested for robbery and murder so often that too many people can become desensitized to the statistics.

Referring to the number of Americans who identify as Black, he asked, “How is 13% of the country causing all the problems?”

Young was involved in a high-profile traffic stop in 2018, in which he said one officer pulled him from his car and another pointed a Taser at him after he refused to leave his vehicle.

“I’m on the board for a reason,” he said. “They put me here because they see the way I think, they know how I feel.”

Kalia is a reporter for WUFT News who can be reached by calling 352-392-6397 or emailing news@wuft.org.
Previous The Lede || Season III Episode VIII: Women Activists
Next These Female-Owned Businesses In Gainesville Persevere In Spite Of Nationwide Challenges