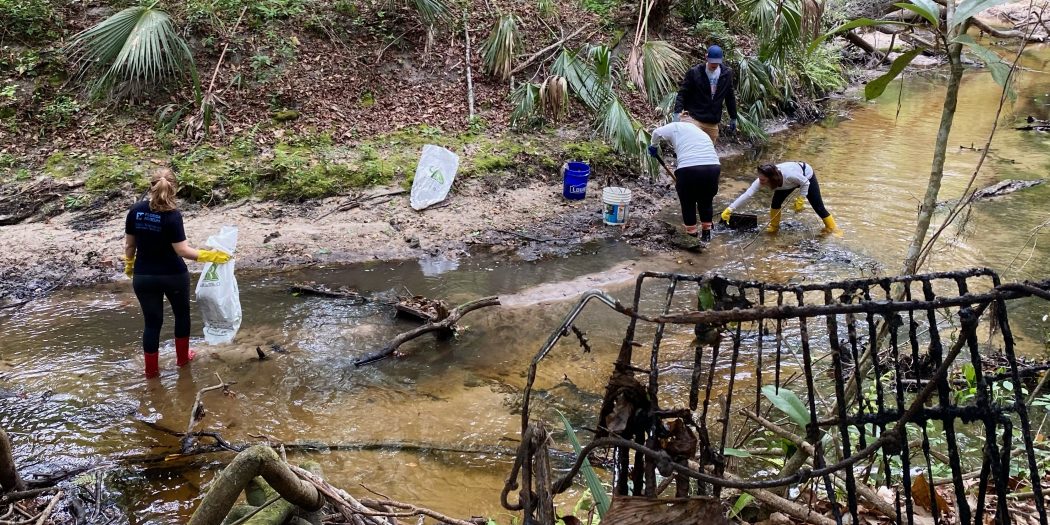 Hogtown Creek is an urban waterway in Gainesville where thousands of pounds of garbage end up every year. Current Problems works to pull the items back out, one by one. (Hannah Shelton/WUFT News)

These were the mutual benefits that the partnership between First Magnitude Brewing Company and Current Problems produced in Gainesville during the seventh annual Clean Creek Fest.

Current Problems is a nonprofit organization that cleans polluted water sources in north central Florida, and this year’s cleanup from March 17 to 20 garnered the support of 165 volunteers who collected a record-breaking 6,597 pounds of trash, invasive plant species and other waste from Gainesville creeks.

Cleanup volunteers tended to their preassigned cleanup sites and brought their findings back to First Magnitude Brewing Company, 1200 SE Veitch St, to be weighed and organized by Current Problems’ board members, volunteers and interns.

As the team members sorted items as recycled, repurposed, thrown away or considered hazardous waste, registered volunteers over 21 could enjoy a free beer inside the brewery.

“First Magnitude has such a name in the community for their activism and water quality. I mean, beer brings people together,” said Nicole Llinas, executive director of Current Problems. “Building energy into community engagement projects is super important, this kind of energy does not exist in smaller events we have.”

According to Llinas, the Clean Creek Fest in 2020 had 133 volunteers who picked up 4,900 pounds of waste across 15 different sites in Gainesville.

In 2021, however, volunteers could request a particular spot during their registration or be assigned to one of 34 creeks that Llinas deemed problematic.

“I drive around the area to find sites and, after I mark them on my phone, I’ll make a map and notes for volunteers to follow,” she said. “I note any safety concerns…and try to let people pick their preferences.”

Volunteers could select different intensity options, from “light” to “gimme the big, gross stuff!” when they registered for the event, as Llinas said options are important in encouraging more people to feel involved and like they’re making a difference.

“I want to meet people where they’re at in their interests and not make them feel like crap because they don’t want to pull a tire out,” she said. “You don’t have to. There’s way more other things that you can do to help out.”

Llinas said the organization is funded by a contract with local government, and supplies are donated through partnerships and sponsorships.

“We have a contract with the city because, when the Clean Water Act was passed, all of these cities and counties had to meet a quota for how much trash they removed from the water,” she said. “They have no way to do it, so they contract us out to do it. We help them meet their clean water standards.”

In addition to the registration form’s site preference and cleanup intensities, it also gave volunteers the option to sign up as an individual or group.

There was a five-person minimum to register as a group and, as a pandemic precaution, a 20-person maximum.

The “Trash Pandas,” another group that is affectionally nicknamed after infamous trash-digging raccoons, also gathered garbage along Hogtown Creek. They returned to the brewery with a collected total of 1,089 pounds of waste, which included two tires, one microwave and a mattress.

Dan Rountree, one of three founders of Current Problems, weighed the individual bags and findings as Hollie Greer, an environmental specialist with the Alachua County Environmental Protection Department, documented the numbers.

Greer serves on Current Problem’s board, which oversees Llinas’s work as director, alongside Rountree.

Rountree founded the organization in 1993 with a mission “to preserve and protect the water resources of North Central Florida for the use and enjoyment of wildlife and humans through action, awareness and education.”

He said the biggest part about their work is “just showing up.” The organization removed 21,340 pounds of waste in 2020 and its efforts to show up for 27 years have amounted to 899,361 pounds of waste pulled from local waterways since its founding year.

Correction: A previous version of this article incorrectly referred to “Current Problems” as “Common Problems.” The article has been updated accordingly.

Hannah is a reporter for WUFT News who can be reached by calling 352-392-6397 or emailing news@wuft.org.
Previous Florida Faces Supply Shortages With Johnson And Johnson COVID-19 Vaccine
Next University Of Florida Holds First Virtual Match Day Ceremony For 2021 College Of Medicine Class