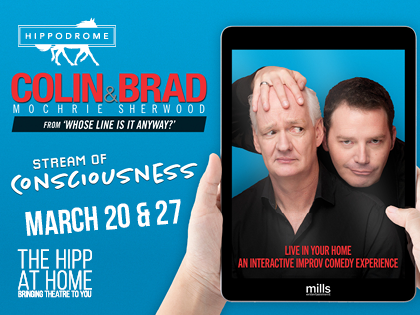 WUFT Morning Edition host Glenn Richards recently spoke with actor, comedian, game show host, and writer, Brad Sherwood, best known as a series regular for eighteen seasons on Whose Line Is It Anyway? – starting on the original British version in 1992 and then on ABC for seven seasons. The CW Network revived the show in 2013.

Since 2003, Sherwood has been touring with fellow Whose Line? performer Colin Mochrie for a two-man improv show: Scared Scriptless! Now they have an all-new live improv show via Zoom: Stream of Consciousness.

The Hippodrome State Theater in Gainesville presents Stream of Consciousness with Colin Mochrie and Brad Sherwood streaming for The Hipp at Home on Saturday, March 20 and Saturday, March 27 at 8:00 p.m.

Glenn Richards is Operations Coordinator and local host for Morning Edition on WUFT-FM. His background includes 30+ years of radio in South Florida as an air personality, promotion director, and morning show producer (WSHE, WZTA, & WFLC). His previous education includes a Bachelor of Science in Communication from the University of Miami where he was also general manager of WVUM-FM. Upon his arrival in Gainesville in 2006 to pursue a telecommunication master’s degree at the University of Florida College of Journalism and Communications, he worked as an air personality at WRUF-FM (both Rock104 and Country 103.7 The Gator). One of Glenn’s passions is local music. Since 1990, he has produced and hosted local music programs in both South Florida and Gainesville, playing demos and independent releases from unsigned artists, many of whom went on to national prominence including: Marilyn Manson, Sister Hazel, For Squirrels, Matchbox 20, Saigon Kick, Mary Karlzen, Nil Lara, Hundred Waters, and more.
Previous ‘What Does the Earth Ask of Us?’: Plant Ecologist Robin Wall Kimmerer Answers the Question
Next UF Plans For A ‘Largely Normal’ Summer B and Fall