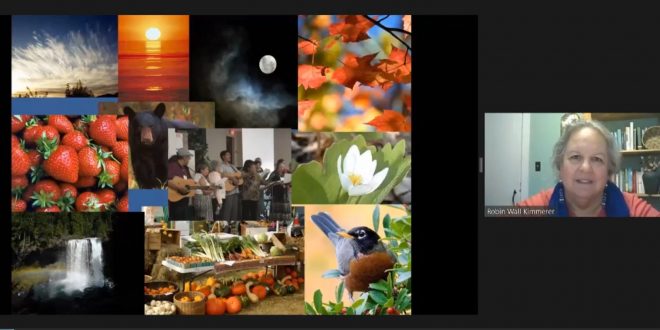 Robin Wall Kimmerer began her keynote by showing the collage on Thursday.

‘What Does the Earth Ask of Us?’: Plant Ecologist Robin Wall Kimmerer Answers the Question

The coronavirus pandemic forced plant ecologist Robin Wall Kimmerer to take her keynote virtual on Thursday, but that didn’t keep her from lifting up her audience.

“Thank you,” virtual attendee Anna Currie wrote in the Zoom chat, “for feeding my spirit.”

Kimmerer, author of two award-winning books, spoke as part of the Big Read series, which aims to build community and highlight women in science.  It’s produced by the Florida Museum of Natural History and the Alachua County Library District and supported by the National Endowment of the Arts. Kimmerer’s keynote drew some 500 signups, according to Catherine Carey, the museum’s public programs coordinator.

Kimmerer started her keynote with her traditional Potawatomi protocol greeting. Then, she showed a collage of humans, bears, flowers, sunset and other visions that show the beauty of nature. She talked about all the things the Earth gives to us: “the first breath of morning air, cool drink of water, beautiful food to eat…the companionship of friends, families and all of those beings with whom we have the privilege of sharing the earth.”

“It’s also part of our traditional beginnings,” she said, “to always begins with gratitude.”

By introducing her background and her journey as a scientist, author and teacher, Kimmerer connected the keynote with the theme of women in science, particularly the indigenous women in STEM, science, technology, arts and mathematics.

“If we gather here to talk about women as leaders, as change agents, as carriers of knowledge,” she said, “then every one of the women that you see here was a leader and a knowledge carrier.”

Through talking about people who led tremendous changes, she highlighted intergenerational relations and the responsibilities of each generation. She took her grandmother as an example, indicated the passing of knowledge.

“My relationships not only to the past, but relationships to the future,” she said, “I’m the dream of my ancestors, I refuse to be the nightmare for my descendants.”

Kimmerer decried the world view of exploitation and the problem with institutions and an economy that seem to always ask what more can humans take from the earth. She pointed out that it’s the greatest threat for humans’ continued survival.

To inspire the audience and answer the question of “What Does the Earth Ask of Us,” she talked about the notion of sustainability, her own stories and experiences that allowed her to use two different world views and create ways of thinking to know the natural world and working on science, the meaning of land and our relationship to land and more.

And she also provided one of the possible answers of what can we do for the Earth: “How do we answer that question of what does the Earth ask of us? One of the powerful ways of doing that is healing the damage that we have done.”

“We give our gifts in reciprocity for, although we have been given, the world is renewed.”

At the end of the keynote, she fielded questions from the audiences and offered answers, one of which included a daily practice that she engages with in her own life.

“I try every day to be outdoors in the presence of the gifts and the gift givers, and to be outside and offer my gratitude to all of those lives who are around us,” she said.

The irony of that message being delivered wasn’t lost on the event organizers.

“What I hope people to take away from the keynote is to slow down and look at the world, to appreciate the world.” Carey said, “Even though we’re doing a virtual event on technology, if people are then inspired to read a book, to think more about the natural world, to be inspired by nature, that’s the job.”

The pandemic had a great impact on these events. All the events had to be quickly turned into a virtual program when the pandemic came, but people who worked on the program still tried to make it impact on the community.

“Even though it’s during the pandemic, when no one can see anybody, we still manage to have an impact for programs supporting women in science,” said Jasmine Tran, the adult services senior manager of Alachua County Library District.

The next event of the Big Read, a children’s book meetup, will be held on Saturday, March 27.

Zhe is a reporter for WUFT News who can be reached by calling 352-392-6397 or emailing news@wuft.org.
Previous The Point, March 19, 2021: Florida’s Age Restrictions For COVID-19 Vaccine Could Disappear In April
Next ‘Whose Line?’s’ Brad Sherwood & Colin Mochrie Bring Improv to Zoom for The Hipp at Home