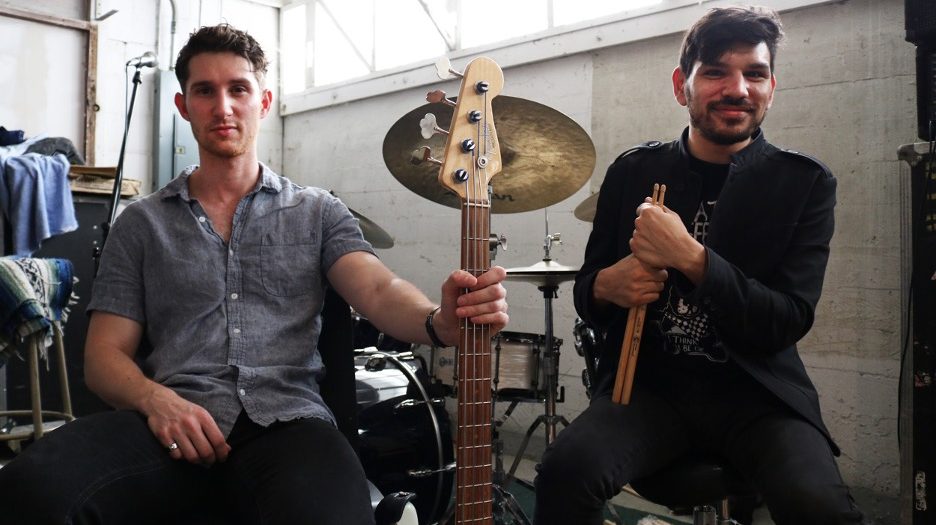 John Shermyen (left) and Alex Klausner (right) set up Upbeat GNV with the hopes of helping the music community, and anyone who needs it. (Lawren Simmons/WUFT News)

Mental health issues are prominent among musicians, especially during a pandemic. To combat this, an organization called Upbeat Gainesville is putting on free programs for musicians both locally and around the state.

Alex Klausner, drummer for the group Rehasher, moved from Gainesville to Los Angeles in March of 2020. He quickly found himself stuck in his apartment during a global pandemic, unable to find sustainable work.

After two months, Klausner, 30, moved back to Gainesville and, with the help of his friend John Gray Shermyen, started the nonprofit Upbeat GNV – a free resource dedicated to breaking down barriers to mental health treatment for musicians in Gainesville.

Shermyen, 31, bass player for The Savants of Soul and now director of outreach with Upbeat GNV, said he has had his own journey and struggles with mental health in the past.

This isn’t uncommon for musicians. In a recent web survey, more than 73% of the 1,489 independent musicians surveyed said they experienced negative emotions such as depression, anxiety and stress related to creating music.

“I want to be the change,” Klausner said. “I want to do something that is going to bring some kind of encouragement and some kind of positivity forward, and it was important to me that my efforts were going to be focused around something like that.”

When developing the idea for Upbeat GNV, Klausner remembered an organization he had stumbled across while doing research in 2016 called Nuçi’s Space, which operates as an affordable, accessible resource for musicians with mental health issues in Athens, Georgia. Klausner took inspiration from some of its programs.

There are two types of workshops that Upbeat GNV hosts. The first, called the Musician Mental Health Workshop, led by Let It Shine Counseling, is a 10-person workshop designed to help musicians learn coping mechanisms for day-to-day life.

The four-week course is led by professional therapists and offers participants practical guides on dealing with the stress of anxiety, depression and other health issues.

The workshop currently running is led by Mary Bobowiec, a licensed mental health counselor, and gives tips on being mindful and aware of your emotions and how to deal with those emotions.

The second program offered is the group session called Musician-Focused Talk Therapy. This five-person group is focused on facilitating communication between people dealing with similar situations and difficulties.

Klausner detailed how this sort of therapy can be uplifting.

“There are a lot of ways you can get into your head as a musician,” Klausner said. “It can feel really lonely sometimes, so that is why I think the group therapy thing is really great . . . This doesn’t have to be a lonely experience.”

Upbeat GNV also has a resource guide set up by Shermyen, 31, to help people find local free or affordable help. For Shermyen, being able to find all of those resources in one place will make people more likely to use them.

Upbeat GNV is planning for the future.

“I would like us to become a 501(c)(3), so we can do some fundraising and hopefully expand programs,” Shermyen said. “And, for me, the goal would be able to give as much free therapy as we can to musicians, then to artists and then to hopefully anyone who needs it until we have Universal Healthcare and we no longer need to exist.”

“Right now, I think the goal for me is just to have more people know who we are,” Klausner said. “Over the next year, my ideal scenario is just having a presence.”

Correction: A previous version of this article named John Gray Shermyen as John Shermyen. It has been updated to correctly state his full name.

Lawren is a reporter for WUFT News who can be reached by calling 352-392-6397 or emailing news@wuft.org.
Previous The Point, March 11, 2021: Florida Prisoners Are Now Eligible To Earn Civil Rights Just After Their Release
Next Florida Governor Dangles Hope: Vaccines For Everybody