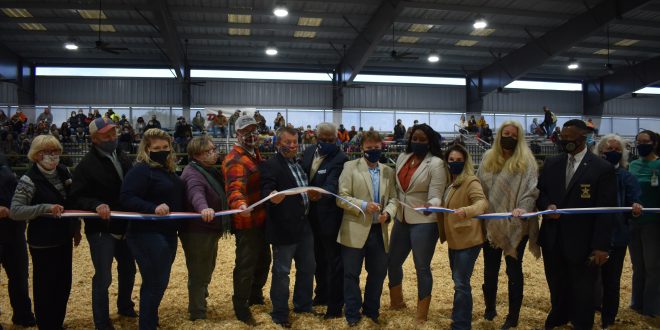 Local government and agriculture leaders cut the ribbon on Saturday at the Alachua County and Agriculture and Equestrian Center in Newberry. (Reagan Knight/WUFT News)

After years of planning and months of building, the new Alachua County and Agriculture and Equestrian Center in Newberry opened Saturday with the annual Alachua County Youth Fair and Livestock Show. The agricultural event runs through Tuesday.

Students who came to the event were thrilled to be in a much bigger, newer, and safer pavilion.

“New pavilion, new place, lot of new moving parts and all of our county members have done an excellent job to ensure that this event goes as smoothly as possible,” said Kyle Dyksterhouse, a 16-year-oold Alachua County Youth Fair Ambassador. “Having been going to the old pavilion for over nine years, it’s going to hold a sweet spot in my heart, but this new facility has a lot of potential and will be a much better place for us to be in.”

The event was the culmination of years of work relocating the fairgrounds from near the Gainesville Regional Airport to the new spot, formerly called the Canterbury Equestrian Showplace. The move started back when the city of Newberry suggested that the county in 2018 purchase the showplace. The county then invested over $8 million to build a state-of-the-art equestrian center.

The new facility is a 150’ x 250’ open-air pavilion with seating for more than 2,000 attendees. In addition to hosting the Youth Fair and equestrian events, the arena can host other events including festivals, rodeos, auctions, concerts and trade shows.

Peebles was just one of the few leaders in charge of the million-dollar project. Lee Ferguson is the only full-time county employee who has been working on the Canterbury pavilion for more than 30 years. To see this new project come to an end has been a thrilling and enjoying ride for him.

“Everything you look at out here has changed, from the building to the railings, concrete, restrooms and it’s up to current safety standards, Ferguson said. “We’re still working on some things such as privacy fences, some work in the arena such as lighting, better signage and more.”

While there are some things still left to do, the pavilion is up to current safety standards to host equestrian shows and events such as the Youth Fair and Livestock Show this weekend.

The ribbon-cutting ceremony took place Saturday evening and featured local Alachua County leaders and U.S. Rep. Kat Cammack. Before the ribbon was cut, government leaders teamed up with students for a farm animal “celebrity show.” The pairs each dressed up a goat in different clothing and competed to have their animal stand out against the others.

This game reflects why Newberry Mayor Jordan Marlowe believes that this new facility is all about the kids.

“We worked together with numerous groups of different folks to make today happen,” Marlowe said. “We did it all for the kids and it’s a wonderful legacy to leave behind. We wanted to make sure that this was a viable, profitable center so that it wouldn’t become a burden on the taxpayers, and this facility hits all of those marks. That’s why it’s such a wonderful success for the entire county.”

There are currently five more events that will be taking place at the new arena, and those events can be found on the event page for the Alachua County Agriculture and Equestrian Center.

Reagan is a reporter for WUFT News who can be reached by calling 352-392-6397 or emailing news@wuft.org.
Previous Plan To Restore Springs In The Santa Fe River Shows A Promising But Challenging Year Ahead
Next Gainesville, Iraqi City Of Duhok Re-Up Sister City Agreement