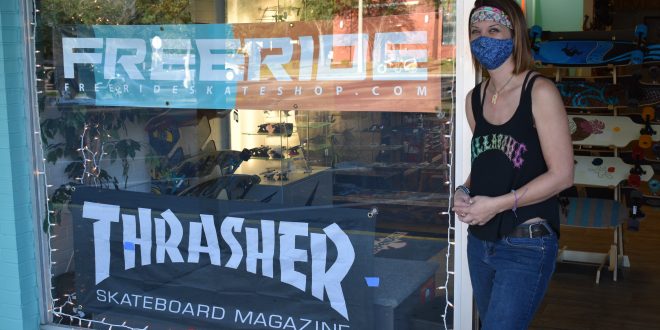 Kevin Masaro’s small business in Gainesville received $1,007 in federal financial relief amid the pandemic that helped him fund payroll in May of 2020.

“We can use every dollar,” said Masaro, 27, the co-founder of Always True Co., a clothing and lifestyle brand. “So it was good for us at the time because we had some payroll to cover.”

Masaro said a lot of the businesses around him were helped throughout the pandemic through applying for loans or other forms of assistance, but he also said they could always use more.

A primary objective of this two-week window was to allow businesses with fewer than 20 employees to get access to the financial help that they may have been unable to get previously. The window opened on Feb. 24 and closes on March 10. Following this period, the loans will be available to all businesses until March 31.

Alyssa Brown, vice president of public policy for the Greater Gainesville Chamber of Commerce, said in the first rounds of PPP loans, 3,700 businesses in Alachua County received them, totaling about $267 million in funding and helping to save thousands of jobs.

“We’re not out of the woods, but I think the first two rounds have definitely been helpful to businesses,” she said.

Brown said she is excited to see that the latest round of funding is being focused specifically on the needs of small businesses that were potentially left out on the first two rounds.

Cathy Norman, 55, owner of Intuitive Design Clothing, an online boutique for men and women, said being online during the pandemic has been a blessing.

“With people not being able to go out and shop in the malls and different places like that, people are sitting at their computer,” she said. “So I think it’s actually been actually good for business for me because people are looking online.”

Norman said she might look at the loans this time, but hasn’t before because she prefers to sustain her business herself. She said she might have benefited from applying but didn’t want to be tied to anything.

“Anything for my business is straight out of pocket, so I know that I worked hard for this,” she said. “I had a couple of donors, one family member, and one close friend but that was that.”

Norman’s business was set up to run through an online market at the start of the pandemic. Other businesses were not ready and have found it difficult to adjust.

Chuck Sapp, 60, owner of Paddiwhack, a furniture store and craft gallery in Gainesville, said his business has struggled due to the transition to online shopping during the pandemic.

The business is having to downsize and change locations from Northwest 13th Street to Northwest 16th Ave. Sapp said this is primarily due to the changing shopping trends and the effects of the pandemic.

“I just had a customer that said ‘well we looked online for it, we went to Dillard’s and they didn’t have it in stock, so we called you,’” he said. “We were their third choice. And yet, we had it in stock at a lower price than online or Dillard’s.”

Sapp applied to the first round of PPP loans, but for him, the amount of money offered was small in comparison with the overall expenses for his business so he did not pursue it.

Instead, Sapp received an Economic Injury Disaster Loan from the SBA, which he said was to help sustain the business through the downturn.

“That was a $30,000 SBA loan that was offered early on, and that basically covered the majority of our employee expenses during the COVID shutdown and after,” he said.

Sapp expressed concerns about applying for a PPP loan again.

“If we’re going to have all this red tape that we have to jump through, and we only get 10% of what we need, it’s not worth it,” he said.

However, Sapp said that won’t stop him from looking into the latest round of funding.

“We’ll take a look at it and if it is something that where we would qualify for like six months expenses we would probably apply,” he said.

The funding formula for the program was updated to allow sole proprietors, independent contractors and individuals who are self-employed access to more funding. The update also got rid of restrictions for individuals with non-fraud-related felonies as well as immigrants who legally reside in the country. Individuals with student loan debt delinquency are now eligible to participate in the program as well.

Acting SBA Regional Administrator Janita Stewart oversees operations over the Southeast, including Florida, Alabama, Georgia, Kentucky, Mississippi, North Carolina, South Carolina and Tennessee. Stewart said businesses can apply for a loan by contacting participating lenders, the SBA or the small business development centers to get help applying for a loan.

Stewart said the goal of the equity plan is to reach the businesses that are in underserved markets.

“Minority businesses, women-owned businesses, veteran-owned businesses and businesses in rural areas, they’ve not really been in the fold,” she said. “So, this time frame that the Biden administration has chosen really allows those to get to the table and link up with a lending institution in order to provide them this relief that they need.”

Aside from PPP loans, a small business can apply for SBA debt relief, express bridge loans or the COVID-19 Economic Injury Disaster Loan. The administration is also getting ready to launch a new relief program geared toward live-event venue relief. The program is called Shuttered Venue Operators Grants.

Raina Harter, 39, owns FreeRide Surf and Skate Shop with her husband Peter Harter. The two took the business over in October, but opening during the pandemic seemed to work in their favor, Raina Harter said.

“We’re pretty much brand new since COVID, and we’re doing OK,” she said. “So, I would rather see that money go toward another business that does really need it.”

Raina Harter said she believes the business has done well because her shop sells outdoor goods.

“If anything positive has come from COVID at all it’s that people are doing a lot more stuff outside,” she said. “I would say the biggest increase of customers for us has been females. So many girls are coming into skating.”

Harter spoke with her accountant about applying for a PPP loan, however, they ultimately decided not to, since they do not have any employees.

“We essentially won’t have employees this year, and my husband and I don’t take a paycheck,” she said.

Sapp said he thinks the pandemic would not have hit local businesses as hard if people put a focus on shopping locally.

“The greatest thing that can help small businesses is if the local community would truly think about shopping, local, and shopping local first,” he said.

Norman said she thought community members needed to support one another more locally.

“I feel like another silver lining of COVID is that it’s made people realize how important local businesses are to support,” she said. “We’re the people who live in your community, and the taxes that you pay to us, like sales tax, goes to our community.”