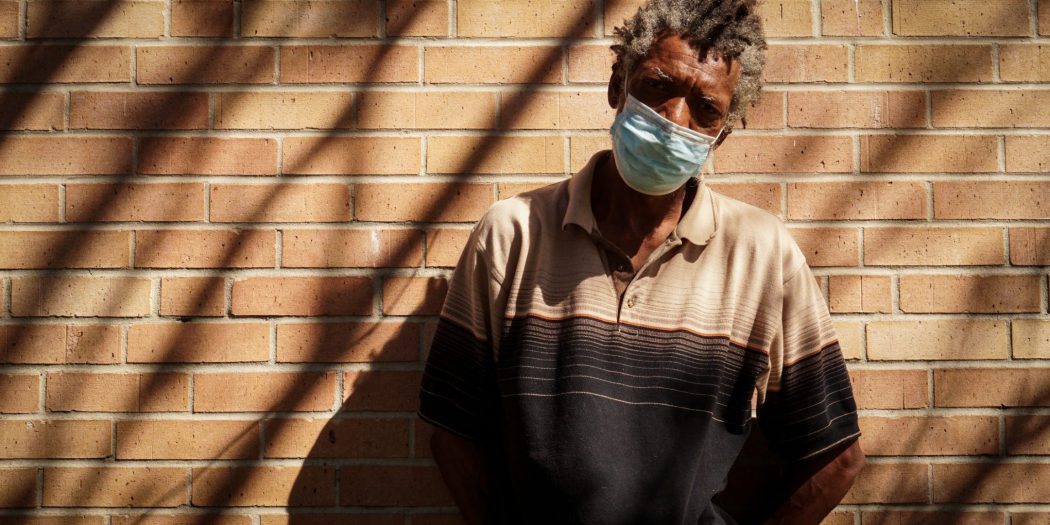 Frank Edwards, 61, poses for a photo against the wall of the old Fire Station 1 by Main Street. (Walter Harwood/WUFT News)

Behind the former Fire Station 1 in downtown Gainesville, a set of 16 gray lockers sits on a concrete slab next to three portable toilets and three trash cans, all provided by the city for the homeless community who live and camp on South Main Street.

But many of those people and the outreach advocates who assist them see these lockers as a minor effort by officials to address systemic inequalities in Gainesville.

This is especially the case for Obediah Bell, 62, who has been waiting to gain access to the lockers since their installment.

“Those lockers don’t even represent a half percentage of the people that really need to store things they carry out daily,” Bell said.

Commissioner David Arreola announced the installment of the lockers in a Facebook post on Feb. 10. People could sign up for a locker starting Monday, with key distribution beginning Tuesday.

Arreola said the lockers are a response to concerned citizens’ complaints that people and police officers were throwing away items belonging to the homeless people.

“It’s just the fact that when you don’t have anywhere to secure your things, anyone, whether it’s the government or not, can violate your privacy, which is really horrible to say, but it’s sort of the reality,” he said.

Gainesville Public Information Officer Rossana Passaniti said businesses in the area also wanted the belongings stored away. Passaniti said the total cost of the project was $4,500 and would be operated by St. Francis House located at 413 S Main St.

Frank Edwards, 61, also hoping to gain access to a locker, said they are not what he had envisioned.

Although the current lockers would help, Edwards said, they are too small and too easy to break into. Footlockers placed in the ground and at least 2 feet long and 2 feet wide would have been ideal.

Currently, one locker unit measures at approximately 3 feet high and 1 foot wide. The lockers are made out of hard plastic and closed by a key lock, which Edwards said could easily be cut through.

“All I need is a bolt cutter, and I can get somebody’s personal items,” he said.

Additionally, Edwards said the city could have put the lockers in a more well-lit spot where people could access them safely.

“The location is not good at all,” he said. “Because why would I put my stuff in a locker that’s in a secluded area, with no lights, no cameras, no type of surveillance?”

According to the executive director of St. Francis House, Lauri Schiffbauer, the area surrounding the lockers has security cameras and lights.

“That was one of the reasons they placed it there,” she said.

“I can’t speak for the city,” she added, “but my guess is, with this whole revitalization of the downtown area, the lockers probably did not fit into the landscape.”

Schiffbauer said they will observe whether they need to add more lights and security cameras when they begin distributing the lockers.

She said there are two sets of keys for each locker unit, and they will be distributed on a first-come, first-served basis. Locker users must check in once a month to confirm they are still using them. Otherwise, after exhausting all attempts to reach out, St. Francis will give a key to the next person on the list.

Once Edwards found out who would be operating the lockers, he said he felt uncomfortable.

Edwards said in order to use St. Francis House’s services, if you have any type of warrant against you, you need to first be cleared by the Gainesville Police Department.

Schiffbauer said it was not yet discussed if this would be the case with the lockers, but they are leaning towards it. She added that in order to operate in the downtown area, this was an agreement they made with the city when the shelter first opened.

The blue cards required to receive a meal from St. Francis House only certify that there are no currently outstanding warrants, she emphasized.

“I don’t feel comfortable with that,” Edwards said. “I feel that they should let the CMC (Civic Media Center) run the lockers.”

Edwards also suggested the $4,500 could have been spent placing homeless individuals into motels or other temporary housing. Outreach workers have said housing for homeless people should be a top priority for the city.

“One of the biggest issues in getting people into housing is making sure that they have the documents they need to get into housing like an ID, a birth certificate, DD Form 214 discharge papers from the military,” he said. “If you are living on the streets, and you’re living a mobile lifestyle, those things can get exposed and destroyed by the elements or just lost in transition. So, in that sense, a locker is a great idea for people to keep that employment documentation.”

“The city commission’s failure to pass the moratorium on new development means that gentrification will continue, and that is the true driver behind homelessness,” Segal-Wright said. “Homeless services are vitally important, but if we continue to prioritize luxury condominiums for UF students over affordable housing, homelessness and poverty will only increase.”

Segal-Wright said their opinions do not necessarily represent those of St. Francis.

Commissioner Arreola also expressed some of the same concerns regarding the lack of housing and said there are about 5,000 people in the city in need of affordable housing.

Arreola said there are city projects in progress addressing this issue, such as workforce housing being built on University Avenue. And while he’s not personally a fan of luxury apartments, Arreola said over the long term they will lower the cost of housing in Gainesville by freeing up housing in other areas.

In February, the Gainesville Community Reinvestment Area Advisory Board approved over $200,000 from the Downtown Redevelopment Trust Fund for GRACE Marketplace’s street outreach initiative. City officials also approved a community outreach program for employment opportunities for those who panhandle.

Obadiah Bell said he hopes the city of Gainesville can respect homeless people, value human life and look past only valuing people who pay taxes and “send their children to colleges.”

“All they think about is just a dollar. And those of you who are wise taxpayers, who understand this, are to come against this type of ideology, and show some compassion to human life. People treat dogs better than they treat human beings.”

Kristin is a reporter for WUFT News who can be reached by calling 352-392-6397 or emailing news@wuft.org.
Previous Families Of UF Students Who Died In Pedestrian Crashes File Wrongful Death Suit
Next Watch Live: FBI Director Wray Testifies Before Congress For 1st Time Since Capitol Attack