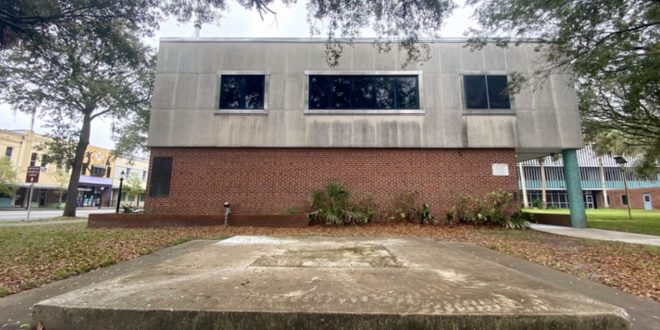 A historical marker that will commemorate the eight victims of lynching in Gainesville during the Reconstruction Era is set to be completed in May.

The Alachua County Community Remembrance Project committee is spearheading the creation of the marker. It’s part of the Alachua County Truth and Reconciliation’s goal to “set an example for how local government can recall its role in our history of racial injustice, and repair what it can through official apologies and appropriate reparations.”

The completion date was announced at the project’s monthly meeting on Feb. 24, a virtual gathering that began with a moment of reflection from Brittany Coleman, one of two leaders of the program’s Trauma Informed Committee.

“History is not the past,” Coleman said, quoting James Baldwin. “It is the present. We carry our history with us. We are our history.”

The marker is intended to educate the county on its history, and committee members said they are working with the national Equal Justice Initiative to finalize what the marker will say and where it will be placed.

The initiative has collaborated with other counties nationwide to create markers that memorialize racial violence.

“We want to say the truth about what happened,” Jackie Davis, the liaison between the local committee and the national initiate, said, “and also say that we need to stop the inequity and address the disparities between Black and white people in our county.”

The initiative’s Community Remembrance Project has fabricated and installed one other marker in Florida, a memorial to a lynching victim in Orlando.

“As part of their work, the Equal Justice Initiative is helping all the counties where lynching occurred to educate their communities about that history,” Davis said. “It’s also to memorialize the victims of lynching and recognize the legacy of that Jim Crow era is still with us.”

Davis said the committee has sent the text draft to the EJI, and their historians and researchers are working on finalizing it.

In addition to approving the words, Carl Smart, the county Staff Liaison and Davis’s committee colleague, said they need to select a location for the Gainesville marker.

“We’re looking at the County Administration Building property, maybe even the corner of Main and University might be a good spot,” Smart said, “that would be near where the old Confederate statue stood for over 100 years. It may be a fitting replacement for that.”

Smart said that proposed location “fits the bill” for a place that is highly visible and has heavy traffic in order to commemorate the event and educate the public.

The statue, “Old Joe,” was dedicated by the Kirby Smith chapter of the United Daughters of the Confederacy. It was unveiled outside of the Alachua County Administration Building on Jan. 19, 1904, but it was relocated to Oak Ridge Cemetery on Aug. 14, 2017.

Davis said she believes the statue was removed “with the growing awareness of the incongruity of honoring Confederates in this country.”

Once the marker’s description and location are finalized, there will be an installation ceremony.

The ceremony will also highlight the Racial Justice Essay Contest, a scholarship contest hosted by the EJI and ACCRP for public high school students in Gainesville.

“Currently, we’re holding a high school essay contest for all the Gainesville high schools, and children are writing essays talking about events that happened in the Jim Crow, Reconstruction and Post-Reconstruction Eras, and they are relating them to current events,” Davis said.

She said the winners will be announced at the ceremony, and they will receive cash prizes and read their essays.

The essay contest is open to all public high school students in Gainesville, and the submission deadline is April 15.

The initiative will judge the essays, but they will be collaborating with the Alachua County project team to finalize the historical marker in the meantime.

Smart said the historical marker is a way to document history about who was involved, where events happened, what the “motives” were of people who committed these crimes and to see if there are any descendants of the lynching victims today.

“The purpose of all of this is to educate our community both about our history of racial violence and about the legacy its left and the current disparities we face,” Davis said.