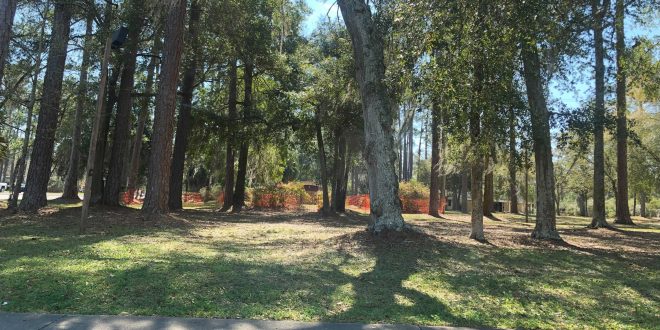 There has been no development on the property since St. Michael’s Episcopal Church was torn down in 2018. (Charlene Medders/WUFT News)

The Gainesville City Plan Board was split in its decision on Thursday to deny or approve petitions to change the land use and rezone the property that once featured St. Michael’s Episcopal Church.

After four and a half hours of discussion, board members ended with a tie vote, 3-3, on both decisions to either approve or deny the proposed plans for land use change and to rezone the property.

The vote for the approval or denial of this development will now go to the Gainesville City Commission for a first reading of the plan in the coming months.

The property, at 4315 NW 23rd Ave., has just over seven acres of land and is adjacent to Rutledge Cemetery, CVS Pharmacy, Kangaroo Express and Publix.

Kevin Frazier, a partner at Wilson Development Group, said the group went to the City Plan Board in 2018 seeking a different zoning designation for this site.

At the meeting in 2018, the board unanimously denied the proposal after hearing traffic concerns from the public.

Frazier said he spent almost two years communicating with neighbors of the property, and he found that changing the zoning to a planned development provided the most protection for the neighbors and allowed him to specifically address their chief concerns in a permanent way.

“We all worked together to draft this,” Frazier said.

The proposed zoning to planned development has some restrictions on what can and cannot be built at the site.

Retail sales and services, restaurants or coffee shops with drive throughs, wine and cheese shops or financial institutions could all be built on the site. The proposal would not allow establishments like smoke and vape shops, grocery stores, food trucks or halfway houses to be built.

Frazier said he’s not able to specifically say what will be built in the area, but he said it will be a blend of different establishments for the neighborhood to use.

“There are everyday needs that we will provide to that area of Gainesville that will allow people, in some cases within the neighborhood themselves, to not have to get in their cars to get to,” he said.

Twelve people from the community spoke in opposition of the proposal on Thursday, while five people spoke in support. Many of the people opposed were residents of Suburban Heights, a nearby neighborhood.

Several of the residents believe a portion of the property will house a Starbucks with a drive-through and are in opposition to having a drive-through in the area. They believe the drive-through will bring more traffic into their neighborhood — as happened with the one on Northwest 13th Street near Gainesville High School — affecting the safety of the community.

“There is no definitive Starbucks here,” Frazier said, in response to board members and community members repeatedly discussing the negative impact of a drive-through.

Harry Shaw, a former professor at the University of Florida who has lived in Suburban Heights since 1974, said the proposal is incompatible with the quiet neighborhood he lives in. He said the new development may benefit some people, but the 2018 meeting did not solve the problem of an increase in traffic and nothing has changed since then.

“Our concern is not that the property be developed, but rather it be developed in a way that proves clearly that it would not be bad to our neighborhood,” he said.

Shaw said the lack of change outweighs the positive conditions and adjustments in the new proposal, and he encouraged the board to deny the petitions to change the land use and rezone the property.

Frazier said there will be multiple locations to enter and exit the site, which will help mitigate traffic surrounding the property.

“We’re going to be implementing traffic reducing measures within the neighborhood itself,” he said. “We’re going to improve signage related to telling cars to slow down. We’re also going to be putting in speed calming elements.”

Jeanne Repetto, a faculty member at UF, supported the proposed plan, and she said the developer has met as many needs of the community as it could.

“The reality is that something is going to be built there,” she said.

Repetto said the area needs something that will be of good and viable use. If that’s a Starbucks, that can be an anchor for this area, she said. Regarding traffic concerns, she said that it’s ultimately up to the city and Alachua County, not the developer.

Another Suburban Heights resident, Rachael Channing, opposed the petitions. She said this development will cause an increase in traffic and negatively impact the subdivision and home values in the neighborhood.

“This is preposterous to me and potentially very dangerous,” she said. “In other words, I feel like this is an accident waiting to happen.”

While some of the property may be developed in the near future, a little over half of the site will stay designated as conservation. Frazier said the group will be implementing a conservation easement, which will provide permanent protection to the property.

At the end of 2018, St. Michael’s Episcopal Church was torn down before a meeting that could have marked it as a historic landmark and preserved it for at least one year.

The future for the site is still unknown after the meeting, but board Chairwoman Stephanie Sutton encouraged the community to attend the city commission meeting in the upcoming months to again let their voices be heard.