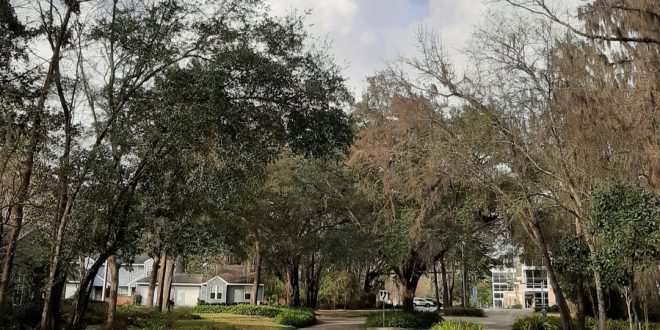 Mill Pond, like many other Gainesville residential neighborhoods, has trees lining the street. According to the Gainesville Urban Forest Ecological Analysis, trees save residents about $1 million a year because they conserve energy costs by providing shade. (Alexa Sauvagere/WUFT News)

Over the course of four years, community leaders and city directors designed an extensive plan to help protect the collection of trees and plants that grow within the city. Developers recently finalized the Gainesville Urban Management Plan and presented it to the Gainesville City Commission in January.

The plan serves as a way to hold land developers and the city government accountable for the local environment. Despite acting as solely a guideline, the plan sets the foundations for new land development regulations.

“This is definitely something that city staff and the commission can all see as a positive that will benefit the city overall,” said Liliana Kolluri, the city environmental coordinator.  “If you’re in an overly developed, disturbed environment trying to start a new forest from scratch, it’s almost impossible.”

The city began working on the comprehensive plan in late January and expects to have it finalized by the end of the year if no pandemic-related setbacks occur. The plan lasts for about 20 years, with possible updates in the interim.

“The thing is, it’s not really just about trees and arboriculture,” Kolluri said. “Our urban forests provide so many functions to us as residents of this city that we may or may not recognize.”

In 2016, a group of University of Florida professionals published the Gainesville Urban Forest Ecological Analysis, which provided results from their survey of the city. It found that urban forests save energy by shading homes and save public health by reducing pollutants in the air, said UF Extension Coordinator Dr. Michael G. Andreu, a key contributor to the ecological analysis and the management plan.

According to the report, Gainesville’s canopy cover stretches about 47%, comparable to Miami’s 21% of canopy cover and Orlando’s 22% of canopy cover. The report also showed that the forests remained in good condition and consisted of mostly native, noninvasive tree species.

On an economic aspect, the report found that the value of the Gainesville urban forests equates to $1.4 billion, and the benefits that it produces for the residents amounts to about $24 million a year. Urban forests also provide economic value to developers; other studies have found that urban forests beautify settings and attract more visitors and residents, Andreu said.

“Typically, when you ask the question, ‘What do you want?’ often a city will say, ‘Let me go ask the experts, and we’ll decide,’” Andreu said. “What we really said was let’s do this differently; let’s ask the people what do they want.”

The development process of the plan incorporated as many stakeholders as possible: arborists, developers, landscape professionals, environmental activists, university professors, private citizens, etc. A group of 11 individuals, each handpicked to represent a different stakeholder, made up a Public Committee on Urban Forest Sustainability.

The group came together to form a vision statement and a set of goals based on the results of the public survey sent into the community. All the other subsequent work that went into the plan afterward could not conflict with the established goals and vision.

Though the public survey received about 750 respondents, Dr. Andreu said, it failed to cover the entire population. The demographics of who they surveyed and who responded to the survey did not get a fair representation of communities of color.

“Not only do we need to tell them about what we know, but more importantly, and I think this is critical, we need to hear about the forests and how it impacts their lives. We need to listen to them,” said Andreu, who noted that most survey respondents were white.

As much as the plan developers like to say that they reached out to the public and ran a public survey, they missed part of the population, Andreu said. He believes that the survey can do a better job in reaching out to the entire community.

The urban management plan includes the task of conducting another public survey in the future. Along with ecological scientists, the team wants to bring in social scientists to go through some of the flaws of the survey.

The urban management plan showcased the need for a better educated population and a greater understanding of the values trees place on them. The team recognizes the disproportional representation and intends to account for it in the next survey.

“We think of this plan about the trees, but really, this plan is about the people,” Andreu said. “And I think that’s important because the people are why we have these trees.”

Alexa is a reporter for WUFT News who can be reached by calling 352-392-6397 or emailing news@wuft.org.
Previous Oakmont Neighborhood Will Soon Have A 46-Acre Tortoise Reserve
Next Gainesville Police Advisory Council Elects New Leadership