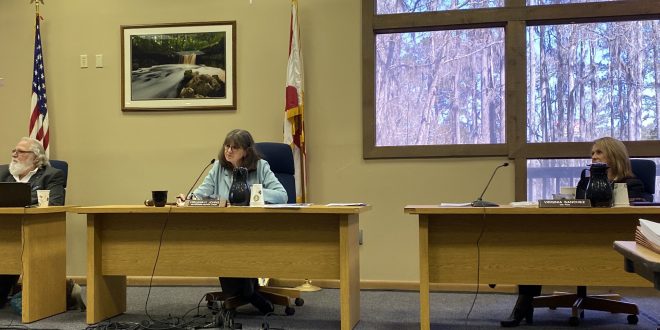 LIVE OAK – In the face of stark local environmental opposition, a state water board on Tuesday unanimously approved “with protest” pumping about 1 million gallons daily for Nestle’s bottled water business from one of the treasured natural springs along the Santa Fe River in north central Florida.

Critics promised immediately to appeal the decision affecting Ginnie Springs by the seven-member governing board of the Suwannee River Water Management District. It was a blow to environmentalists, who said further pumping of the crystal blue waters would put at risk the health of an already taxed river and its surrounding ecosystem.

At nearly 60 feet deep, set among a 200-acre forest, the springs is one of the world’s most popular freshwater diving locations and enormously popular among swimmers, paddlers and naturalists.

The decision after a four-hour board meeting and about 19,000 written public comments to the district culminated a fight that extended almost two years and drew international attention. Approving with protest does not mean the district is required to take further steps to change the permit, said Tom Reeves, the water district’s legal counsel.

But environmental activists say they will continue to work to stop the permit. Merrillee Malwitz-Jipson of the group Our Santa Fe River said advocates’ next step will be to sue the district.

“The communities do not want this,” she said.

The district previously indicated it would not approve the “consumptive use” permit, but a state administrative judge, G.W. Chisenhall, last year backed a legal appeal. He ruled that the bottled water would be of “beneficial use,” one of the legal standards in such cases, and ordered the board to reconsider. Reeves, the board’s lawyer, said that ruling effectively tied the board’s hands, meaning the conditions that they could use to deny were out of their jurisdiction.

That led the board Tuesday to approve the permit benefitting Nestle “with protest,” preserving legal strategies it did not specify to continue appealing the decision. Some board members said after the vote they were ready to stop fighting.

The attorney who sought the pumping permit, Doug Manson, objected to the provisional nature of the approval. “There should be a finality to this,” he said.

The dilemma laid bare competing public interests in Florida: Successive Republican governors and the GOP-controlled Legislature have aggressively courted economic development in the face of criticism they have been insensitive to environmental threats from corporate activities. Residents consistently express they care deeply about the state’s natural habitats, including its beaches, natural springs and the Everglades wetlands that extend across South Florida.

All the board’s members were appointed by Florida’s most-recent Republican governors, Rick Scott and Ron DeSantis. Scott’s environmental record has been criticized as dismal, and DeSantis signed into law a measure last year that prohibits local governments from granting the environment legal rights. That law, intended to tackle water pollution, foreclosed as a legal strategy the so-called Rights of Nature movement to improve environmental protections for rivers, springs, mountains, forests and glaciers.

A mother and her son told the board she took days off school when she was young to enjoy the springs, and now her son was missing classes to try to save the springs. Others cited the economic value of the springs as a tourist destination.

Generations of Floridians, a Weeki Wachee springs mermaid, University of Florida students and professors, and out-of-state callers also urged the board to deny the permit.

Consumption permits would have to be reduced by 30% for the springs to be healthy again, said Michael Roth, Our Santa Fe River president. Once bright-blue waters are green because of accumulating algae, he said.

“It is self-renewing, but there’s a limit,” he said. “And we are way beyond that limit.”

An environmentalist, John S. Quarterman of the Waterkeeper Alliance, told the board that if it had blocked the request for Nestle, a $309 billion brand, the board would almost certainly be sued by corporate interests and DeSantis would fire members from their political appointments. “Do you really need this job?” he asked. He urged them: “At some point it’s best just to stand on principle.”

Employment was important to three workers of a Gilchrist County Nestle bottling factory who expressed their support for the permit.

“For generations, our company has contributed to the state of the strong corporate citizen, providing good paying jobs with benefits in a socially responsible, clean manufacturing industry that supports our families and local community,” said factory manager Lane Tuten, who brought a poster with an image of the factory and employees’ signatures.

Ginnie Springs is one of 11 springs in the area with a combined discharge of 260 million gallons per day, according to figures from the Florida Department of Environmental Protection.

Florida’s state water management districts are responsible for preventing significant harm to waterways, including setting minimum flows, which can be reduced through pumping permits. Under state law, such permits must be reasonable and beneficial, not cause adverse environmental impacts, not interfere with existing legal use of water and be consistent with the public interest.

“Please find the courage to vote the right way for Florida’s springs and rivers,” another speaker, Jim Tatum, told the board. Scores similarly protested Nestle’s plans.

Bottled water is optional in most of the U.S., so that is where environmental activists are drawing the line, said Ryan Smart, executive director of statewide group Florida Springs Council.

“If they’re going to grant this permit, then what permit could ever be denied?” he asked.

The board’s chairwoman, Virginia H. Johns, urged people attending the meeting to stay polite, alluding to the tense atmosphere over the decision. “The meeting is not a place for political endorsement,” she said. Despite the tensions, the meeting remained civil.

The decision renews an expired water use permit for a local company, Seven Springs, to provide water for bottling operations to Nestle, which produces the Zephyrhills and Pure Life brands. The company had previously been withdrawing water from the springs in lower amounts. Nestle, a Swiss multinational food and beverage company, said the springs could accommodate its pumping and pledged to work with local officials to ensure the spring remains sustainable.

Ahead of the decision, Nestle had been airing political advertisements on network television stations across the region noting that it employs hundreds of people as part of its bottling business.

The Ginnie Springs bottling plant has operated since 1998, but Nestle bought it in 2019 and aims to dramatically expand pumping there in a business that has been incredibly lucrative for the company and others in the bottled water industry. Last week, Nestle coincidentally announced it would be selling its North American spring water brands, which include regional brands in other states and Canada, for $4.3 billion.

Seven Springs will pay a one-time $115 fee to the state, and its compensation from Nestle will be far more lucrative. Several public commenters were concerned by the profit.

The pandemic limited attendance at Tuesday’s meeting. None of the board members wore masks, but each sat at separate desks at a distance from each other at the head of the hearing room. About a dozen others spread throughout the room wore masks.

People who wanted to deliver public comments before the vote were able to dial in on a conference line, leading to awkward technical glitches and delays waiting for speakers to unmute their phones or pull over while driving before they spoke. Over hours, she called dozens of names of people who had asked to speak but weren’t on the line.

“I think everybody is out enjoying the sunshine today,” Johns said.

This story was produced by Fresh Take Florida, a news service of the University of Florida College of Journalism and Communications. The reporter can be reached at arubin@freshtakeflorida.com.

April is a reporter for WUFT News who can be reached by calling 352-392-6397 or emailing news@wuft.org.
Previous UF Scientists Set To Study Spread Of Florida’s Invasive Species
Next Feb. 23, 2021: Afternoon News In 90