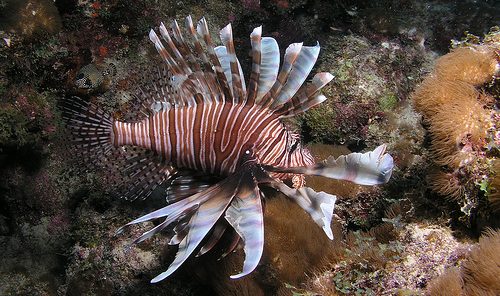 Indo-Pacific native lionfish continue to be one of Florida’s most invasive species as they threaten reef habitats (WUFT News).

Florida is home to more invasive species than any other state. These non-native animals, which are often purchased as pets or brought over on ships, have the power to wreak havoc on local ecosystems.

A team of scientists from the University of Florida hopes to address the invasive species problem by predicting how invasive species will move and migrate over the next 50 years as climate change, urbanization and other factors reshape the landscape.

Brett Scheffers, assistant professor at UF and the project’s principal investigator, said most of Florida’s invasive species are located in South Florida — but climate change and other trends could push these animals north.

“When species start moving into a new area, it’s not like a solid wave that covers all the ground available,” Scheffers wrote in a university press release. “A better comparison would be the way veins and arteries in the body branch out in different directions and spread out in an uneven, patchwork way. We want to know what that branching network will look like.”

The two-year study hopes to bring invasive species research and climate research together to create a predictive model that can be utilized by wildlife management agencies.

The research is funded through a grant from the Southeast Climate Adaptation Science Center at North Carolina State University. The UF study includes scientists from the UF Water Institute, U.S. Geological Survey, the Florida Fish and Wildlife Conservation Commission and U.S. Fish and Wildlife Service.

However, in South Florida, a large number of reptile shops, independent zoos and people owning invasive species as pets also contribute to the problem. Animals escape from their cages or are intentionally released into wilderness areas such as the Everglades, and these non-native species can crowd out local animals by inhabiting their territory and competing for the same foods.

In November 2020, FWC proposed new restrictions on owning non-native invasive species. The new rules, which will be presented for discussion and a vote at a Thursday commission meeting, would add “16 high-risk nonnative reptiles to the prohibited list,” institute new reporting requirements for permittees and add new security requirements to reduce the risk of animal escape.

Scheffers said the study should help agencies like FWC deal with the invasive species problem even as factors like climate change and urbanization accelerate population growth.

“We hope to provide wildlife managers with a better sense of where species are likely to go, which will help them be more strategic when it comes to managing them,” he said.

Houston is a reporter for WUFT News who can be reached by calling 352-392-6397 or emailing news@wuft.org.
Previous Feb. 23, 2021: Afternoon News In 90
Next Water Board Approves Pumping Ginnie Springs Water To Benefit Nestle