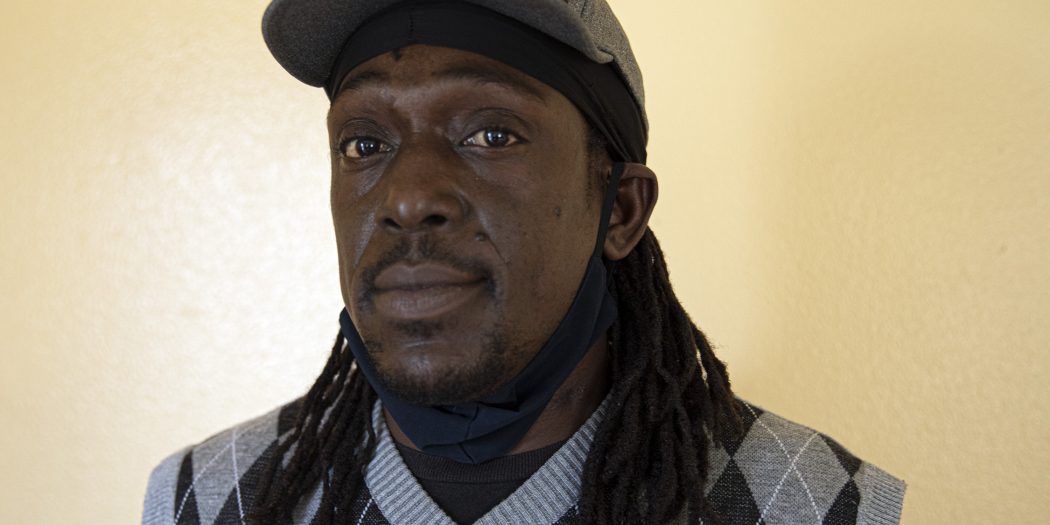 Reginald Jackson stands in his Lakeland, Fla., home on Saturday, February 20, 2021. Jackson is having difficulties getting the majority of a $412,500 judgment he was awarded for being shot in the neck in 2001 by a police officer. (Mingmei Li/ Fresh Take Florida)

LAKELAND – It’s been nearly 20 years, but Reginald Jackson thinks often about the night a police officer here fired a bullet into his neck after a traffic stop. A jury awarded him a large civil judgment, and he’s still waiting to see whether Florida’s Legislature might help him collect it.

Long before the national reckoning of law enforcement’s relationship with minorities – before George Floyd or Sandra Bland or Ferguson, Missouri, or the other victims and cities where such deaths occurred and protests followed – there was the case of Reginald Jackson.

Jackson said he remembers being rushed to the hospital, the bullet protruding from his back. Most of all, Jackson thinks about what he might have lost.

“It was always about justice. But deep inside, I still suffer,” Jackson, who is now 43 and still lives in Lakeland, said. “Now I got kids, I got grandkids. Twenty years ago, my life could have been gone with nothing to be shown for it.”

Jackson won a civil lawsuit in 2009 against Michael Cochran, the white police officer who shot him in Lakeland, in central Florida. The city was required to pay only $100,000 of the $412,500 judgment. To get the rest, Jackson must petition Florida’s Republican-led Legislature – famously supportive of law enforcement – to order the city to pay it.

Cochran stopped Jackson in October 2001 in his silver 1985 Chrysler for an invalid license plate, according to court documents.

Cochran later said in court he realized he typed the number into the system wrong. Jackson’s tag was valid, but Cochran continued pulling over Jackson in the parking lot of a chicken restaurant near midnight. He cited Jackson for driving his girlfriend’s 18-month-old brother without a car seat.

Jackson asked the officer to escort him and the child home, but Cochran told Jackson to call someone for a car seat, court records said. Jackson said a pay phone nearby didn’t work, so he drove a block to another pay phone.

When he stopped, Cochran told Jackson he was being arrested for refusing to obey a police officer. Jackson said he panicked.

“I just always been scared of police all my life,” he said during a deposition. “I done seen my uncle get beat up by the police… I didn’t want the kid to go through this mess.”

Jackson ran to his car, backed it up then put it in drive. As it slowly rolled forward, Cochran – who said he was unsure whether Jackson might be armed – warned he would shoot. He fired a round through the windshield, hitting Jackson in the neck with the toddler still in the car.

Jackson was rushed into surgery. Police took the child to a station without a car seat, according to court records.

Prosecutors initially charged Jackson with second-degree attempted murder but dropped the case. Jackson, who worked in the shipping department of a supermarket, said he could not work for four months. He had to leave work early due to pain, paid hundreds of dollars of medical bills out of pocket and suffered from depression, according to court records.

But he feels fortunate to be alive, he said — unlike others such as Trayvon Martin, a Black high school student shot and killed while walking through a townhome community in 2012 in Sanford, Florida. The case was among the first to draw attention to shootings of unarmed Black people in the country.

“I feel like I was the first Trayvon Martin, and it hasn’t changed,” Jackson said. “From my perspective as a Black man, it’s gonna take a whole lot to change the world for police to understand.”

Jackson sued Cochran for negligence in 2005, backed by attorney Daryl Parks. Parks would later represent the families of Martin, Michael Brown and Corey Jones – all Black men who were fatally shot.

It’s unknown how Cochran feels about the shooting or about Jackson’s latest efforts to collect the jury’s judgment. He did not respond to messages left over one week at his place of employment as a pilot for an Alabama-based medical transport company, and he did not respond to a letter sent to his home.

However, the city only paid Jackson $100,000. Under Florida’s sovereign immunity law, payouts by government agencies are limited unless the plaintiff successfully petitions the Legislature to direct them to pay the remainder.

Fewer claims bills are filed each year. In 2021, there are 13. Many, such as ones involving Marcus Button and Christeia Jones, have to do with serious car accidents. Two involve the wrongful incarceration of men who were jailed for more than 35 years each.

Of all the claims bills this year, Jackson’s asks for the least amount of money.

Claims bills involving police shootings are uncommon. In the last 10 years, only two passed. Lawmakers voted last year to approve a multi-million dollar payment to a Black man left in a wheelchair after a Palm Beach County deputy shot him four seconds after stopping him for riding his bicycle erratically.

Jackson’s claim amount of $312,500 is relatively low, according to Kirk Pepper, a senior government affairs consultant with the law firm GrayRobinson. He was deputy chief of staff to former House Speaker Dean Cannon and worked with claims bills from 2011 to 2012. He called the system an “absolute disaster.”

Politicians find it difficult to select which bills to approve, choosing winners and losers, Pepper said. Lawmakers can be torn considering bills in which the city was most negligent versus where the least amount of money would be handed out.

“It is just a very, very, very politically fraught process,” Pepper said. “Because of all those factors, I’m not sure that there’s a way to make it not hyper-political.”

Changes to the claim bill process are often not received well. In 2020, a bill proposed raising the sovereign immunity payment cap to $1 million, which caused every city and county in the state to go “apoplectic,” Pepper said. It died in the appropriations committee.

Jackson has struggled to recover the jury’s judgment. His bill didn’t pass in 2010, 2017 or 2018. His lawyer, Parks, blames politics. Polk County, which includes Lakeland and is located east of Tampa, is reliably conservative and Republican.

“It wasn’t an issue they were willing to stick political capital on,” Parks said. “Even when we would go to them and reach out, they found nothing, no reason to make Reggie Jackson a person given full justice.” Lawyers can collect up to 25% of money awarded in claims bills.

Jackson had minor brushes with the law after the shooting, including convictions for possessing drug paraphernalia four times and cannabis twice. In 1995, he was also convicted of resisting an officer without violence.

Lakeland City Attorney Palmer Davis said the city openly opposed paying Jackson in the past. In 2010, the city said the jury verdict was wrong and paying Jackson would punish local taxpayers, sending a “terrible message.” In 2018, the city paid two lobbyists to fight the effort.

Twenty years after the shooting, Parks thinks Jackson has a chance of receiving the rest of his claim. The police killings of Floyd, Breonna Taylor and others in 2020 have pressured the Capitol to reconsider its priorities, he said.

“We all know the world is a different place now,” he said. “[The government] can do the right thing. Be something different from the past.”

This story was produced by Fresh Take Florida, a news service of the University of Florida College of Journalism and Communications. The reporter can be reached at hdean@freshtakeflorida.com.

Hope is a reporter for WUFT News who can be reached by calling 352-392-6397 or emailing news@wuft.org.
Previous UF Health Surgeons Save ICU Nurse With COVID-19 Through Double-Lung Transplant
Next The Lede || Season III Episode III: Working Together in the Community