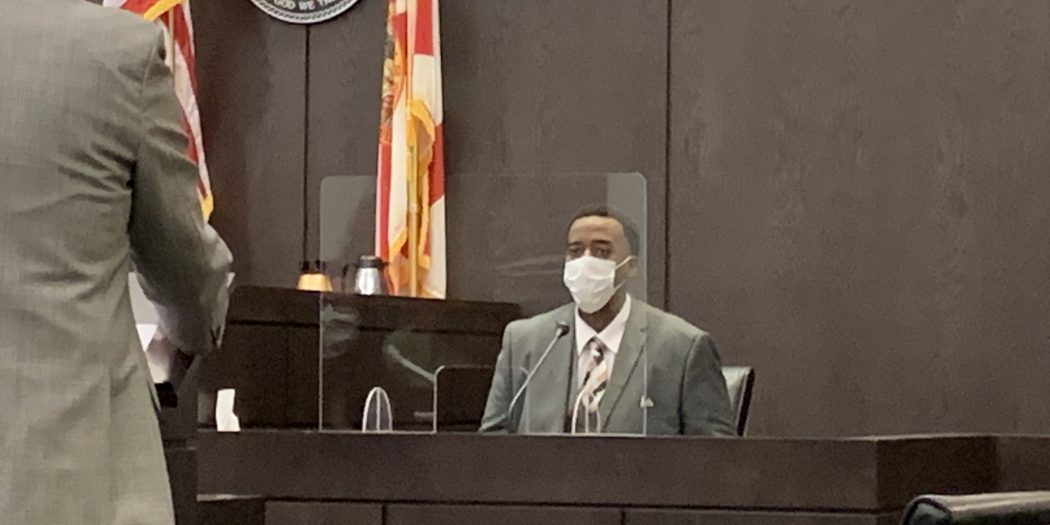 Julius Irving testifies in court about the night of March 27, 2019. (Thomas Holton/WUFT News)

As the state finished its closing statement — a 30-minute PowerPoint presentation detailing why he should be found guilty — Julius Irving sat with his eyes closed as his attorney fiddled with the projector in silence, setting up a rebuttal of his own.

The moment had built for almost two years. Irving, 34, was arrested on March 27, 2019, for stabbing a man while working at the Gainesville Krispy Kreme, 306 NW 13th St.

On Thursday, a jury found him not guilty of attempted first-degree murder.

The state and the defense last week each summed up what took place that night. Irving had gotten into a dispute with a then-18-year-old coworker named Olivia Zavalza about how she was handling the donuts. After an initial conversation, the two had another, more heated exchange, at which point the two went to different rooms. Zavalza called her boyfriend.

The state and defense painted two very different pictures of what happened next.

In the defense’s retelling, Zavalza called her boyfriend, Anthony James Jr., to come beat up Irving. James Jr. walked into Krispy Kreme and pounded on the glass to get Irving’s attention. The two went around back, where James Jr. came around the corner aggressively, causing Irving to take the first swing to get the upper hand. After an initial tussle, James Jr. grabbed Irving’s phone that had fallen on the ground and walked away with it, leading Irving to swing again – this time, with a knife in his hand.

In the state’s retelling, Zavalza called her boyfriend to come pick her up, and James Jr. went into Krispy Kreme to speak with a supervisor about what happened. He saw a friend of his working in the back and lightly rapped his knuckles on the window to get his attention. He and Irving caught eyes, and Irving motioned him to the back to what, James Jr. thought, was a conversation with a supervisor.

When he turned the corner, prosecutors said, Irving came at him and swung. After slamming Irving to the ground and trying to get off him, James Jr. picked up Irving’s phone thinking it was his and began to walk away, when Irving blindsided him with another punch. The two continued to fight, James Jr. not realizing the damage that had been done until he stepped back and noticed the holes in his jacket and the stab wounds in his armpit, chest, back and leg.

As the socially-distanced courtroom watched the proceedings unfold, supporters of Irving made their voices heard outside the Alachua County Criminal Justice Center. Irving is a community organizer for the Legal Empowerment and Advocacy Hub, or LEAH, which is Florida’s first participatory defense hub. Members of various Gainesville activist groups protested in support of Irving throughout the week.

Alfredo Morales, 25, said that even if Irving wasn’t a community organizer, it was important to show support and solidarity. Morales works with several different organizations, including Dream Defenders and Gainesville’s Free Grocery Store. He said he believes that all of the problems different activist groups in Gainesville are working toward are interconnected.

Irving’s mother, Hattie Irving, stood outside the courtroom holding a pink sign, which read “Stand 4 Justice or Don’t Stand at All!” She said the past two years had been hard on her son.

She said he isn’t a vicious man, and rejected the idea of anyone painting him to be one. His work in the community showed what type of person he was, she said.

“He would give his last to anybody,” she said. “He would help anybody.”

Back inside the courtroom during a day of testimony, an officer joked after a lunch break about having Krispy Kreme for lunch. The room laughed.

When one of Irving’s co-workers failed to show up to testify, Irving took the stand earlier than expected. In a gray suit and white facemask, he spoke on his and Zavalza’s disagreement, saying she responded to his concerns with disrespect: “F you and these doughnuts.”

In Zavalza’s testimony on Tuesday, she said Irving told her he was glad she called her boyfriend “because he was gonna work him,” a claim Irving denied. James Jr. said when he locked eyes with Irving, he had no idea who he was, but Irving said he believed he was there to fight him.

After deliberating for about two hours, the jury came to a verdict around 8 p.m. Thursday.

After the verdict was announced, Circuit Judge James Colaw told Irving he was free to go.

Irving made his way out of the courtroom, saying repeatedly to himself, “Praise God. Praise God.”

Once outside, he began to walk down South Main Street with family and friends surrounding him, whooping and hollering into the night, the sounds of passing cars slowly drowning them out.

Thomas is a reporter for WUFT News who can be reached by calling 352-392-6397 or emailing news@wuft.org.
Previous The Lede Special Edition || The Love Day Episode
Next The Point, Feb. 15, 2021: How Parents Have Worked To Keep Open Melrose Elementary School