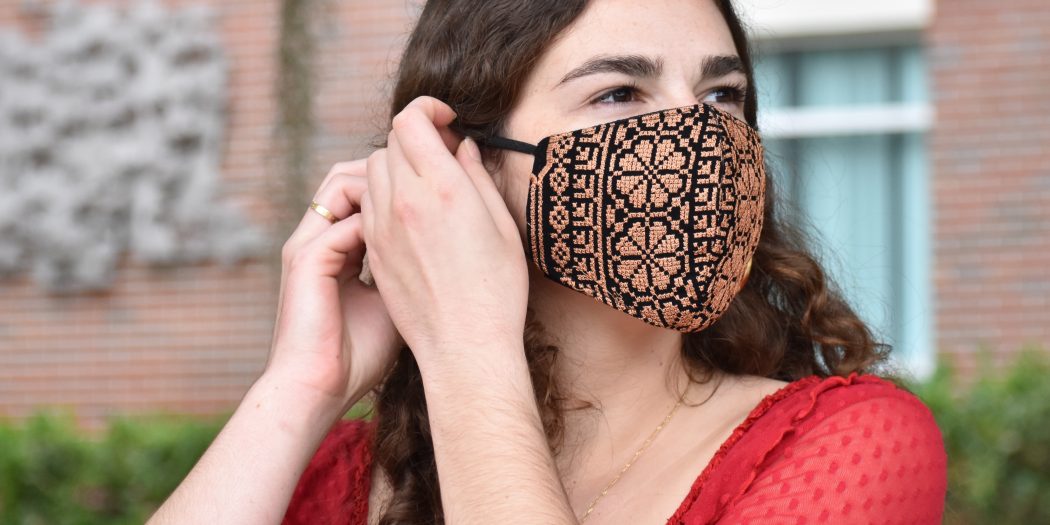 Cristina Cabada Sidawi stands in front of the UF Institute of Food and Agricultural Sciences. She purchased a gold-and-black floral embroidered mask to showcase her Palestinian roots. (Grethel Aguila/WUFT News)

Gainesville City Commissioner Reina Saco is reserving her newest face mask for a special occasion — her next appearance in City Hall. Its green, gold and light red hues geometrically intertwine, creating an intricate reminder of the hands behind its creation: women living in Jerash refugee camp in Jordan.

The mask is one of 50 carefully woven, embroidered and shipped from the camp more than 6,000 miles away to The How Bazar, a vintage store located on University Avenue. The special shipment came from a partnership with Sitti Soap, an organization that helps refugee women sell their products.

The Jerash Camp is a United Nations-run shelter set up for Palestinians who fled the Gaza Strip after the 1967 Arab-Israeli War. More than 29,000 registered Palestinian refugees live in the camp. It is one of the poorest refugee camps in Jordan with more than half of its residents living under the national poverty line.

To Saco, the initiative is a way to empower refugee women, who suffer from an 81% unemployment rate in the camp, to reinvest into their community. It also shows the character of Gainesville.

“We [Gainesville] have more than just the university or the hospital,” she said. “We have individuals who really care about the international community.”

Many residents made and donated masks for charity early into the COVID-19 pandemic, Saco said. But this partnership is different. It helps a community in need and also offers business and opportunity in Gainesville.

The How Bazar partnered with Sitti Soap because it was looking for a project with global impact, 23-year-old co-owner Laila Fakhoury said. The project has been in the works since November.

“We wanted it to not only be local or have a local impact and not just a national impact but to have a global one,” she said.

Sitti Soap began as a group of refugee women who made olive oil soaps for their community and families, Fakhoury said. Its goal expanded when founder Noora Sharrab encouraged the women to sell their products outside their community to earn a living wage.

“They were just doing it because it’s something they love to do and because they want to provide for the people that they care about,” Fakhoury said.

The women, who are mostly Palestinian and Syrian, are also elderly, Fakhoury said. Sitti, the name of the organization, means “my grandmother” in Arabic.

They began making the masks for The How Bazar in late November and early December, Fakhoury said. The masks are crafted from recycled thobe fabrics from a nearby traditional Middle East dress factory. They then made their way to Gainesville in late December and into January. Olive oil soaps are also sold along with the masks to wash them.

Fakhoury said she is especially proud of the partnership because Sitti Soap’s business model mirrors The How Bazar’s. Sitti Soap is a worker-owned organization, meaning that the women have equal ownership.

“The whole goal of it is for artists and creatives and people who like to use their skills and their craft to bring things into the world,” she said. “They can do that, and then they can also get paid for it.”

To Fakhoury, the masks also share a cultural dimension. Embroidery is central to the Palestinian and Middle Eastern cultures — from the thobe materials to the sewing process. It is a skill in most Middle Eastern women’s repertoire.

Now, north central Florida gets a slice of culture on the other side of the world.

“All of these people in Gainesville are getting to witness that, and then, of course, to wear it as, like, a badge of honor,” she said.

Some proudly wear the mask to promote their identity.

Heba El-Ahmad, a 21-year-old UF dentistry student, purchased an ornate black-and-red mask because the embroidery style hails from her homeland — Palestine.  While she has never lived in Palestine, she said she visits every summer. Her grandmother makes traditional olive oil soap like the one the shop sells, too.

If someone compliments her mask, El-Ahmad said she takes time to share information about her culture so people are more educated about Palestine.

“I think, you know, people kind of getting exposed to pieces of our culture like embroidery and slowly learning more and more about Palestine kind of normalizes it in conversations,” she said.

The masks’ impact has spread beyond Jerash and Gainesville.

El-Ahmad also purchased a mask for her mother, a professor at Eastern Florida State College in Brevard County, Florida. As a Muslim woman who wears the hijab, El-Ahmad’s mother takes time to educate her students about Palestine.

Above all, the mask reminds her of home.

“It’s a big piece of home life that kind of gets lost when you live in Gainesville as a student without other people that share your culture,” El-Ahmad said.

Cristina Cabada Sidawi, a 21-year-old UF political science junior, went to check out the vintage store because she was captivated by the masks — and the opportunity to showcase her Palestinian roots.

The Nagorno-Karabakh region is controlled by Azerbaijan even though the majority-Armenian population voted to be part of Armenia in 1994. Palestine has survived more than 50 years of Israeli occupation, which has left millions displaced since 1948.

“I think it’s great for people who don’t necessarily know what refugees go through or know that there are even refugees in Jordan,” she said. “For these types of things to come to Gainesville so people can be more informed.”

When she looks at her mask’s gold-and-black floral embroidery, she remembers the designs on tapestry and pillows at her grandmother’s house.

“When I wear it I feel really proud,” Cabada Sidawi said. “Even if people don’t know where that comes from. I know where it comes from and, you know, no one can take that away from me.”

The How Bazar ordered 150 more masks, Fakhoury said, which will be sold for $25. While their arrival date is still unknown, the refugee women’s artworks will make their way into Gainesville City Hall, UF and local conversations about the Middle East.

Grethel is a reporter for WUFT News who can be reached by calling 352-392-6397 or emailing news@wuft.org.
Previous Florida Wrestles With Surrendered Newborns: Bill Would Standardize ‘Baby Boxes,’ Give Mothers 30 Days To Give Away Infants Without Penalty
Next Gravesites, Churches and Cantaloupe: Pinesville’s History Vital to Florida’s Fabric