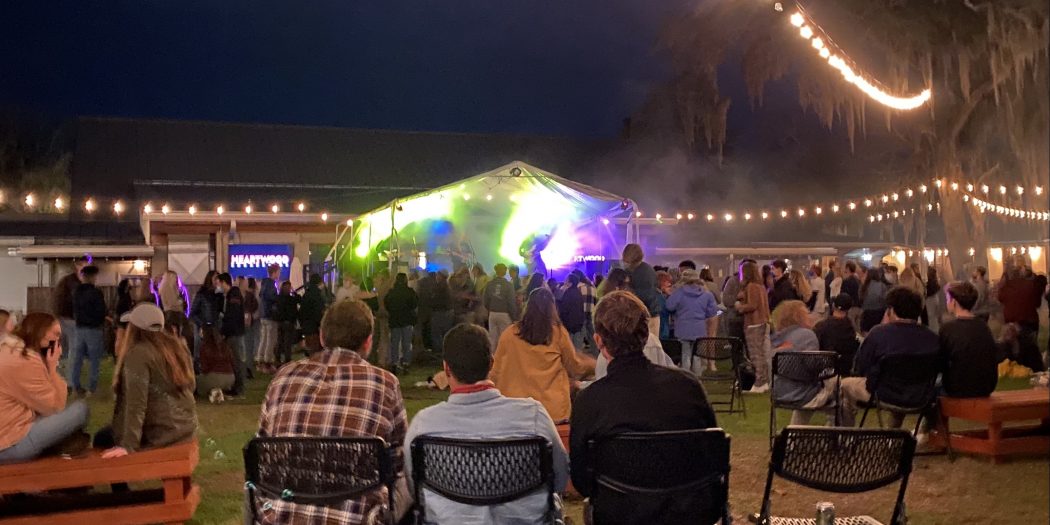 After A Year Of Silence, The Beat Is Back: Live Music Slowly Returns To Gainesville

“It feels almost unreal after all these months to be standing here,” University of Florida senior Morgan Simonson said, “watching and listening to live music.”

Picket-signs planted into the grass read, “Masks required for entry.” Twinkly string lights illuminated the outdoor venue as eager guests entered. Hula hoops created bubbled boundaries six feet apart for guests to remain a safe distance from each other. That proved a challenge when many enthusiastic fans rushed the stage to get a better view.

Dave Melosh, the owner and manager at Heartwood, said he wants to create a safe space for people to enjoy themselves.

“After the year that we had, it’s really important that we come together as a collective and share a positive experience,” Melosh said.

2020 was a challenging year for most Gainesville music venues. When the COVID-19 pandemic forced non-essential businesses to shut down in March of 2020, music venues were left in the dust.

But Melosh and his team at Heartwood Soundstage were determined to keep the venue alive during this time. They received a Paycheck Protection Program loan for small businesses.

With that money, Melosh said, they were able to transition to editing videos for artists and live-streaming events.

Heartwood is not the only music venue that had to find creative ways to stay afloat during the pandemic. Live music and event venue the High Dive struggled early on in lockdown.

The High Dive facility and event manager, Pat Lavery, applied for grants and unplugged each outlet in the venue to keep electricity and utility bills down.

The High Dive team also started a GoFundMe page in March to keep their full-time employees paid. The page raised less than half of their $10,000 goal. Without sufficient funds to pay their 20 employees, the venue had to let go of most of their staff.

“Pretty much the only employee we’ve been able to keep on this entire time is our social media person,” Lavery said. “and they’ve been putting in a lot of extra hours for us.”

After furloughing most of the staff, Lavery knew he had to work even harder to keep the venue alive.

He struck a deal with the High Dive’s next-door neighbor, Five Star Pizza, to personally deliver pizza and packaged alcohol to customers while restaurants were closed. They split the pizza profits, and Lavery put that money back into the High Dive.

“We weren’t ready to reopen immediately,” Lavery said. “We wanted to ensure that we were doing everything safely.”

They hosted stand-up comedy shows and a performance of The Rocky Horror Picture Show in October. Lavery dubbed this slow opening as High Dive’s “trial run.”

“We chose to do things that were conducive to social distancing guidelines and sitting,” Lavery said.

The trial run proved to be a success. So, in November, Lavery and his team decided to have live bands perform inside again with strict safety guidelines, like requiring masks and limiting attendance to 25% capacity.

Lavery has found it’s challenging to generate income while prioritizing the health and wellbeing of their audience and artists.

“If you’re open right now, and you’re doing it safely,” Lavery said, “then you’re losing more money than what you were losing when you were closed.”

In fact, Lavery said their gross revenue is down 90% or more since they were shut down in March.

“There are no profits. We are burning cash every month,” Lavery said. “It will be this way until enough people get the vaccine and we reach herd immunity. Not until then can we start getting back to normal business.”

The High Dive is now taking on a hybrid model. Lavery said they are hosting socially distanced live shows and livestreaming them for those who do not feel safe to go out yet.

“We are going to be hosting livestreams for as long as people want to watch them,” Lavery said.

MusicGNV, a nonprofit organization that supports local artists in Gainesville, saw a need for livestreaming concerts at the beginning of the pandemic. So, they began livestreaming early.

The event organizer for MusicGNV, Brandon Telg, said the success of livestreaming concerts is unprecedented.

“Livestreams were never on our radar because that’s not something we’ve seen anyone have any success with pre-COVID-19,” Telg said. “People just didn’t have an appetite for it then.”

Telg, 31, grew up in Gainesville. He immersed himself in its music community as a teenager. He said he feels a personal responsibility to bring a once-thriving music scene back to Gainesville.

“Some of my most pivotal moments in life have been tied to the music scene in Gainesville,” Telg said. “So, anything I can do to support the bands and the venues that make this scene what it is, I will do.”

One of the many ways Telg has supported local artists through MusicGNV is financial.

The city of Gainesville sponsored the nonprofit organization, and through this sponsorship, MusicGNV was able to pay their livestream performing artists.
“Streaming and record sales don’t make artists much money,” Telg said. “Many artists at the local level rely on performance to generate income, but that’s straight-up gone with this pandemic.”

Take Lead, an indie pop band from Orlando, knows this struggle all too well.

“We had two tours planned before the pandemic,” Take Lead’s drummer Connor Smith, 20, said, “and when COVID hit, we had to cancel everything.”
Even though they have not been able to generate much income from the lack of live music, the band could put laser-focus into writing songs.

“We’ve written 30 new songs since the pandemic,” Smith said. “I recognize it as a different kind of blessing.”

Take Lead has performed in Gainesville four times before COVID-19. They are set to play in the Indie Live concert series in March.

Skylar is a reporter for WUFT News who can be reached by calling 352-392-6397 or emailing news@wuft.org.
Previous UF Announces Enforcement, Upgrades For University Avenue Near Campus After Traffic Deaths
Next Feb. 3, 2021: Morning News In 90