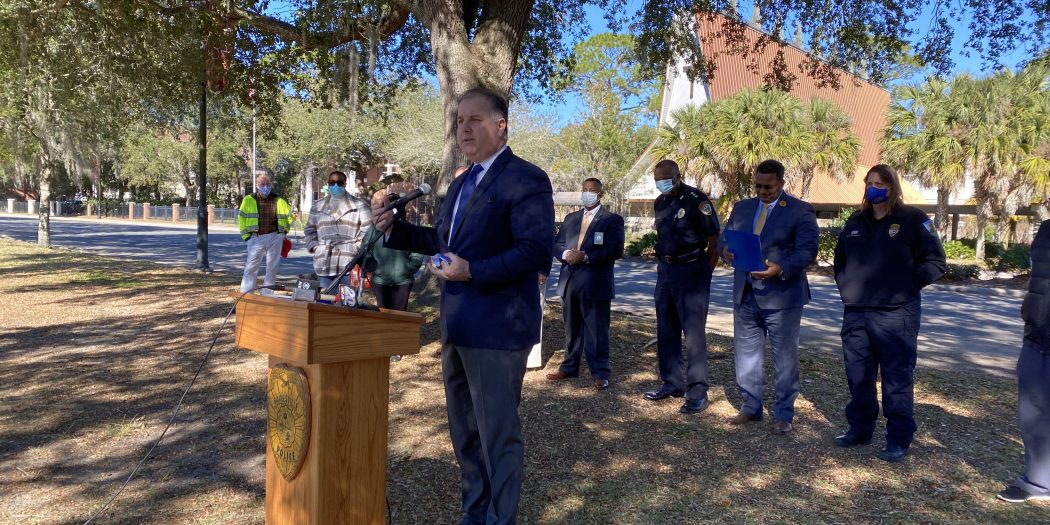 Law enforcement’s increased focus on pedestrian safety comes after the deaths of UF students Sophia Lambert and Maggie Paxton, both freshmen killed by motorists within the last two months. Calls for action on traffic safety from the community soon followed, with a petition calling for traffic safety for UF students garnering over 22,000 signatures as of Friday.

As part of Friday’s demonstration, Gainesville Assistant Chief of Police Terry Pierce repeatedly crossed West University Avenue to demonstrate pedestrians’ right-of-way. Police cited motorists who failed to yield to pedestrians. GPD officers said pedestrians can legally cross a street outside of a crosswalk if cars are a reasonable distance away. Once a pedestrian is in the street, motorists are required to yield to them — this is a rule GPD wants to expand understanding of to amplify pedestrian safety, officers said.

“You have a densely populated area here in the University of Florida roadways,” GPD spokesman Graham Glover said. “If law enforcement can step up its presence to remind the public about laws, to be out there issuing citations when necessary — we want to do everything that we can on a law enforcement front to prevent these incidents from occurring.”

Ultimately, the city government has limited authority over the administration of long-term changes such as speed bumps or speed limits. University Avenue is a state road, Graham said, meaning the implementation of meaningful road reforms is in the hands of the Florida Department of Transportation.

“GPD is going to enforce the laws that are on the books,” he said. “We’re going to enforce traffic laws and pedestrian laws. What the state decides to do with respect to University Avenue — speed limits, or traffic lights, or speed bumps or extra walkways — those are decisions ultimately that the FDOT will make.”

Graham said GPD will be happy to work with the state and provide local data to intelligently address these issues.

City leaders like Mayor Poe also called on state leaders for collaboration in the effort to make Gainesville’s streets safer.

“Our most dangerous roads in our community are our state roads,” Poe said. “So we more than anything need cooperation from our state leaders to help us make roads like University Avenue, 13th Street, Archer Road, 34th Street, Williston Road and Waldo Road complete streets — streets that are safe for all of our users.”

GPD officials said they are pursuing a multifaceted approach to increasing pedestrian safety, and look to collaboration with other local agencies and the state government. Working with UFPD, GPD recently launched the Gator Special Traffic Enforcement Program (STEP) to enforce traffic laws in dense areas near the university and investigate high-volume traffic activity.

Valeriya is a reporter for WUFT News who can be reached by calling 352-392-6397 or emailing news@wuft.org.
Previous ‘Plague’ Transports Hoggetowne Medieval Faire To The Virtual Realm
Next Bradford County Unsure Whether To Search For New County Manager