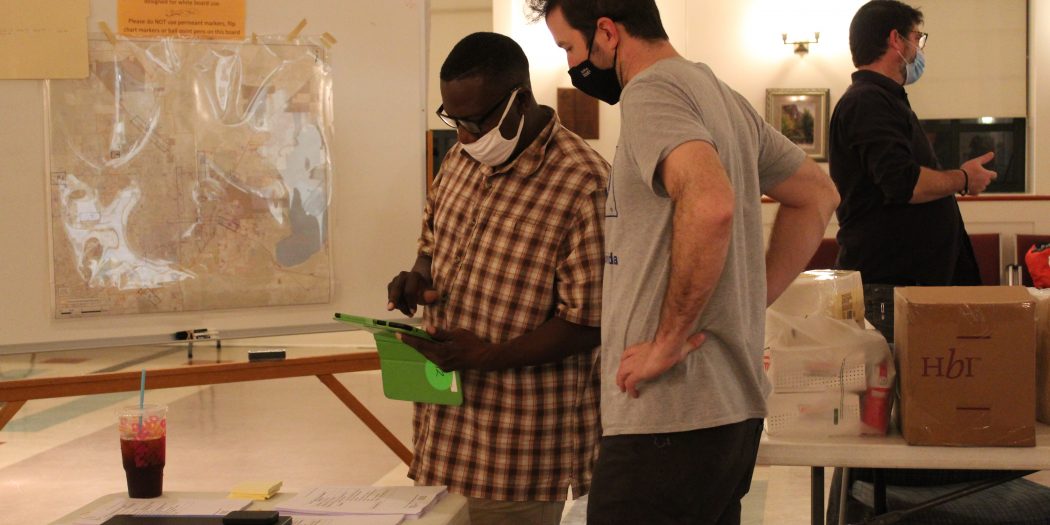 Dozens of volunteers met at Holy Trinity Episcopal Church early Tuesday with coffee and donuts in hand, ready for the annual point-in-time count of homeless people in Alachua County.

The volunteers found their team and zone assignments on a whiteboard. Each team gathered plenty of red care bags with toiletries, socks, ponchos and snacks to give to those without shelter.

Their goal: Spending the day finding and counting as many of the homeless population within the county as possible.

“It’s a little crazy; it’s a little chaotic but, you know, it all comes together,” said Brenda Chamberlain, the senior manager of Housing Data and Community Partnerships for the United Way of North Central Florida.

Chamberlain collects and keeps all the data in the Homeless Management Information System (HMIS), which aims to track the populations of both people without housing and those who are considered sheltered, that is, those who spent the previous night in a building.

The United Way is the fiscal agent for the Continuum of Care, which is also known as North Central Florida Alliance for the Homeless and Hungry. Continuum of Care volunteers conduct the annual point-in-time count required by the U.S. Department of Housing and Urban Development.

Now in its 18th year of doing the count, the group had to make amendments due to the pandemic.

“This year, we have gone entirely electronic with our survey,” Continuum of Care Director Patrick Dodds said. “In past years, we’ve used paper copies, and we felt like the electronic version on a tablet would allow for the process to go quickly.”

The point-in-time count typically happens the last week of January, but this year the group allotted 14 days to get it done. Dodds also said “some communities are not going to be performing a count at all.” They instead will rely on their existing HMIS numbers, he said.

The list of survey questions has been shortened to limit the volunteers’ contact with the homeless population – and possible exposure to COVID-19. Four questions that helped Continuum of Care workers better understand what resources a person needs were removed. The remaining one asked if the individual who is homeless would want to move into housing if it were affordable and available.

The questions allow the Continuum of Care to find, offer and tailor resources and opportunities to those without housing and whenever possible to a specific person.

“It’s not just the geographical data,” Dodds said. “We’re also pulling information that’s important to us to fight back against some of that misinformation.”

About half of the 50-60 volunteers Tuesday were members of the homeless community. Some were part of the sheltered population at GRACE Marketplace in Gainesville. They were paid $12 an hour, up from $10 last year.

COVID-19 prevented the use of unpaid community volunteers.

“I like the increase in paid volunteers,” said Mark Watson, a Three Rivers Legal outreach worker. “Not only are we giving money back to the community directly that we’re helping, but also we get people who have lived expertise in the area of homelessness to talk to the other people experiencing homelessness.”

The point-in-time count for 2020 for the five-county area was 9.45% more than 2019, Dodds said. That included 225 people experiencing chronic homelessness, that is, for a year or longer. For Alachua County, homelessness decreased by 18.4%, he said.

Dodds said the results of the 2021 count will be released to the public by Feb. 28.

Lillian is a reporter for WUFT News who can be reached by calling 352-392-6397 or emailing news@wuft.org.
Previous Gainesville Names Joseph W. Dixon Sr. As New Fire Chief
Next The Point, Jan. 27, 2021: Has The Pandemic Increased Homelessness In Alachua County? Annual Count Might Help Reveal The Answer