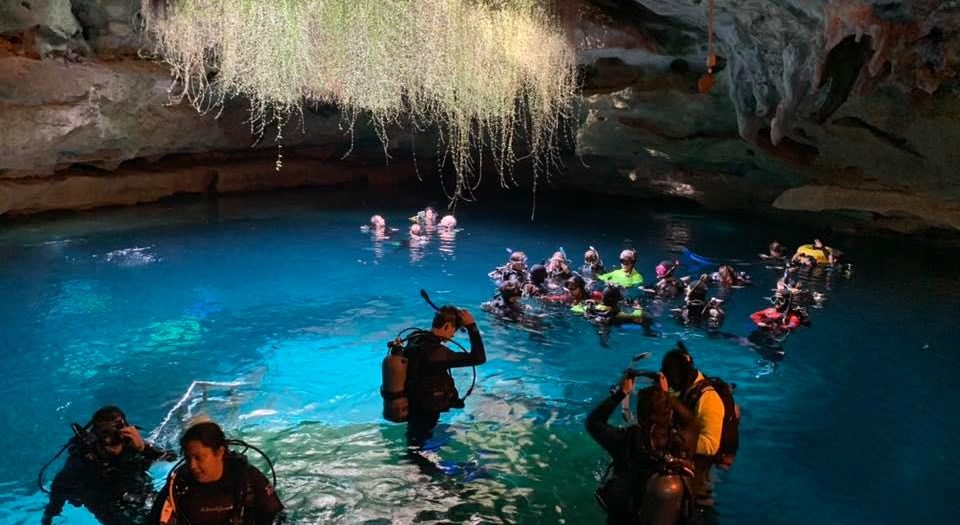 A photo of snorkelers and divers enjoying themselves at Devil’s Den before the pandemic. Now, they are not allowing groups over 10 people. (Photo courtesy of Devil's Den.)

Ken Schwiebert was one of six individuals who in 1993 helped turn Devil’s Den into what it is today, a spring that brings unique tourism to Levy County, even during a pandemic.

“We pooled our resources and acquired the property and then made the investment in those improvements. We have been running it ever since,” Schwiebert said.

Devil’s Den is familiar to people’s national and even international travel destinations.

Upon entering the cave, scuba divers and snorkelers can explore waters over 50 feet deep. This underground spring inside of a dry cave averaged about 200 divers per day during a pre-pandemic weekend.

A significant amount of their business revolves around the weekends, according to Schwiebert. Due to the pandemic, they had to limit the number of people allowed on the premises in an effort to provide a safe place for employees and visitors.

“Fortunately, it’s an outdoor situation,” Schwiebert said. “We have little pavilions and areas where people could remain socially distant. We had to implement a reservation system online so that we would have control over how many scuba divers or snorkelers showed up.”

Their team has made an effort to follow all CDC guidelines and protocols, and Devil’s Den is still receiving a number of visitors.

“These are mainly American tourists that come here, but we’ve had people even now coming from all over the country,” Schwiebert said. “Now as it gets colder up north, they are coming to Florida. This is definitely often a destination for those people. There’s lodging and camping and stuff, so there are amenities here that are attractive for them.”

Not only has this been an attractive site for tourists during this time, but for the county’s residents as well.

“Levy County being a pretty sparsely populated county and it’s all out in the open, people were grateful to be able to get away and do something outside,” Schwiebert said.

Carolyn Ten Broeck of the Williston Chamber of Commerce said the local resort and Williston town overall is filled with divers from Devil’s Den.

She said that some Levy County residents are not aware of this destination, even though people travel from all across the country to experience it.

“Devil’s Den is a jewel for our community,” Ten Broeck said. “Pandemic or not people always are coming, it does bring people into town and they stay here, they spend money here. It’s usually for a couple of days, it is not just come in and dive once, they actually go back and do it again and again. It’s a real boon and we’re very thankful for it.”

Williston is definitely hurting because of the pandemic, according to Ten Broeck. She said this attraction could lead to a potential hotel opening in the area.

“Unfortunately, Williston doesn’t have a hotel per se, we have a tiny home resort which has opened up in the last 6 months, and it’s always filled with divers for Devil’s Den,” Ten Broeck said. “So hopefully this will help us recruit a true hotel here.”

Executive Director of Levy County Visitors Bureau Tisha Whitehurst says that Levy County being a rural area has become an advantage during the pandemic.

“Typically, rural counties don’t fare well when things like this happen,” Whitehurst said. “But because social distancing was something that we sort of offered before it was popular. We have fared really well. Devil’s Den, once the restrictions were lifted from the executive orders, was able to continue on with business, and most people felt comfortable going out and participating in those activities.”

Whitehurst says that Devil’s Den helps surrounding businesses that may be struggling during this time, including gas stations and restaurants.

Samantha is a reporter for WUFT News who can be reached by calling 352-392-6397 or emailing news@wuft.org.
Previous The Point, Jan. 25, 2021: NPR Reviews The Glimmers Of Progress In The National Fight Against COVID-19
Next The Point, Jan. 26, 2021: The COVID Variant Increase, A Conclusion To Nursing Home Vaccinations, And The New Trend In Shark Bite Data